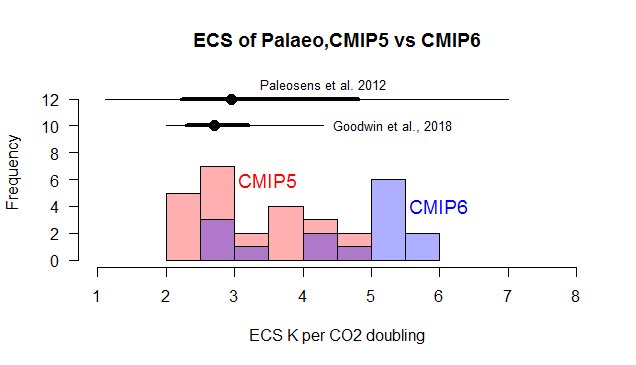 So, it would appear, CMIP6 first results show1. This appears a touch implausible to me, and is waay out of line with previous results from CMIP5, as the figure shows, and in comparison with for example ATTP's nice Bayesian analysis of no great vintage, or the long-established consensus for 3 oC. Which models are where can be found in the twitter thread of from here, if you're interested. I await with bated breath James's and RealClimate's analysis, so that I know what to think.


* Climate sensitivity is 5.3C? - JA from 2016
* If you want some arguments against 5 oC, you could read La Curry; I don't particularly recommend it though, which is why I haven't.
* So convenient a thing it is to be a reasonable Creature, since it enables one to find or make a Reason for everything one has a mind to do.


I feel I shouldn't be totally ignoring Anthony Watts joining Heartland, so here's an image (see-also weasels ripped my flesh): 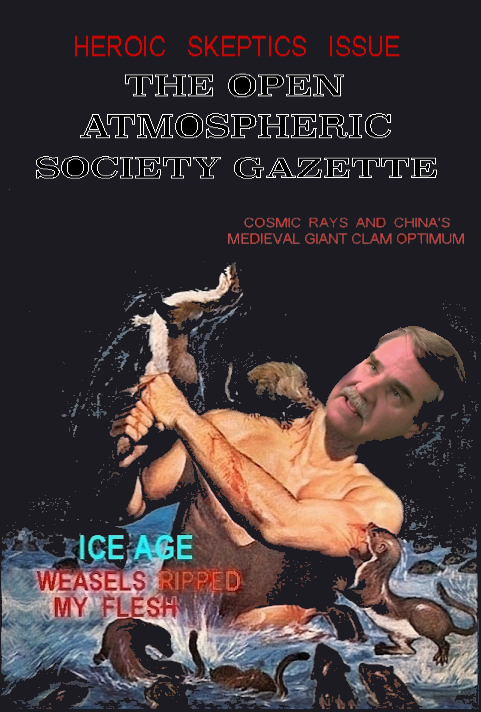 Always good to have an outlier on hand for argumentation's sake. As long as you don't take it seriously.

But still, the sensitivity increase across a number of groups is a bit surprising. I suspect the reason comes down to tuning towards a range of new observational data relating to clouds. If you look through the literature comparing cloud behaviour to CMIP5 models they almost unanimously point to the higher end of the sensitivity range (and beyond) providing a more realistic simulation.


WCRP appears to ne the keeper of the various MIPs
CMIP6-Endorsed MIPs
https://www.wcrp-climate.org/modelling-wgcm-mip-catalogue/modelling-wgcm-cmip6-endorsed-mips

If ECS is too high, I think we will be back to the CMIP5 situation, where 2.5 to even 3.0 degrees per century were seen (mean/nedian/mode) almost immediately after the end of the calibration period (2005).


https://www.sciencemag.org/news/2019/04/new-climate-models-predict-warming-surge has a number of quotes from reasonable people who all seem a bit skeptical (in the real sense of the word, not the WUWT sense).

Assuming that the models do all come out higher, how does one weight that for Bayesian updating? Certainly, I'd like to see how well the models match historical trends as a first pass. The other is a better understanding of the "emergent nature" of climate sensitivity from these models: https://agupubs.onlinelibrary.wiley.com/doi/full/10.1029/2018MS001400 suggests that one can in fact tweak parameters to alter CS substantially without wrecking the rest of the model, which surprised me a bit.

Paleoclimate and the so-called "empirical" approach (e.g., 20th century observations plus simplified models... Lewis et al. holding down the low end of that range, Forest et al. the high end) do seem to suggest that 5 degree sensitivity is rather unlikely. I'd probably weight those two approaches slightly higher than a set of emergent CS behaviors from models.

What I'd like to see is more perturbed physics ensembles, where those that match key metrics (both in terms of present-day climate and 20th century trends) being weighted more heavily, and used to determine a pdf of "emergent CS" from that particular model structure.

The outliers in the historical range of the dozens of published ECS estimates from Arrhenius to the present day range from a maximum of 9.5 to a minimum of 0.5 degrees. and the median is around 2.5 to 3.

If a decay of the tropical low level clouds like in the paper cited here
https://www.carbonbrief.org/extreme-co2-levels-could-trigger-clouds-tipping-point-and-8c-of-global-warming
happens in CIMP6 models (or in the real world !) below four times the preindustrial CO2 level, it may easily lead to a ECS above 5°C.

So it may be that the ECS rises with rising temperatures, or GHG levels.

@MMM: Such a decay of tropical low level clouds seams to have happend in the unpublished ECHAM6.2 2xCO2 leading to the very high ECS of 7°C. After chancing the cloud parameters the decay shifts to higher CO2 concentrations and ECS goes down to 2.77°C for ECHAM6.3 for the first doubling, but higher for further doublings.

I agree that I'm not *sure* that it is too high. But it is substantially higher than the previous consensus, and an outlier in the previous distribution, so I think it would need a lot of examination. And I'm sure that's what it will get.

If I take the distribution of all estimates since 2001, I get, after removing some obvious outliers, that 90% of the estimates are between 1.7 and 5.0 with a median of 3.0. And there is no sign of convergence in the last 20 years.