[Note: this is the old blog. The latest cactus-related stuff on the new blog is http://scienceblogs.com/stoat/2010/05/cactus.php -W]

Every now and again the cactus that lives in a sunny spot at the top of our stairwell (just next to the sadly unwashed window...) flowers. The flowerings are rare - less than once a year - and suddenly I notice that the scruffy old dusty plant is briefly beautiful. perhaps I should sent it back to its native desert to live with JF... 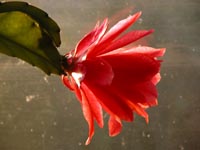 The plant has a history: it was given to my grandad by my uncle; both are now dead, so the cactus is in memory of both of them.

Meanwhile, I got called out to a late swarm of bees, at the local Big House (well, the ex-rectory). Here they are: 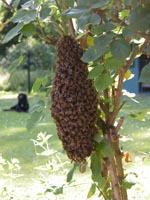 A bit scrawny for a swarm. The dog in the background didn't quite know what was going on. Anyway, into a box they went and I found someone who wanted them. We have a surfeit of green plastic kitchen waste bins around, which make nice bee-proof containers, so (after sellotaping it shut) I was able to walk into their house, swinging the bucket around (carefully...) saying "anyone want a box o' bees?" and the children put their ears to it to hear the bees buzzing.

The next day the people at the house gave me some of their eggs, and a bottle of wine, in exchange for clearing the bees for them. No one has ever done that before! Normally, its not quite clear whether I'm doing them a favour or not: they are grateful for the bees removal, but they kind of suspect that they are my bees in the first place. Which, sometimes, they are.
Posted by William M. Connolley at 10:17 pm

I love this cactus flower. I hope you don't mind if I make it my wallpaper.
If you did please let me know.

Honey photos are cool too.

Cactus is known to flower rarely. Thus, it is an amazing event always! I have never seen that but I'm sure this moment could be one of the most wonderful moments in my life.

Hi! I have three cactuses and wait for their flourishing "for ages" because I know they are able to flower.

I have the same cactus (I think). Mine blooms every year. It was given to me by my father but originally it belonged to my grandmother. It is very easy to grow more just by cutting off a leaf and potting it. :)

Hello, I read your post about this cactus. I have a favor to ask. My grandmother gave me a small cactus years back and it grew to be huge in a pot here in Texas. She passed away this past November and the cactus too died this winter. I've been looking everywhere for another to replace it but have not been successful, as I don't even know the name of it. Mine bloomed every summer one flower at a time, and bloomed over about 2 months. Would someone send me a cutting from their plant? I would be happy to pay for the shipping. Please contact me at stuffittaxidermy@gmail.com

We collected a swarm from a ladies garden at the weekend and where given: £20, a box of strawberries and a bag of lettace
Don't know which of us got the better deal!

I have the same cactus with a story too. Mine came from my paternal grandmother through my father to me. I have started many others from it for my family.