Russell on Rouseau and the Romantics 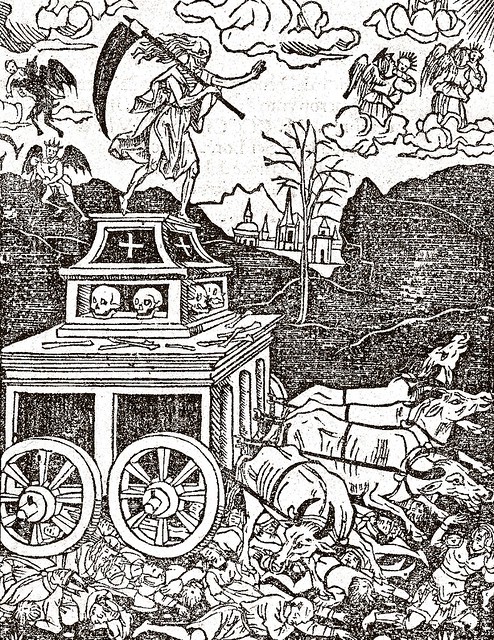 There's a bit more worth adding, for my future reference if nothing else. The end of the chapter: The Social Contract became the Bible of most of the leaders in the French Revolution, but no doubt, as is the fate of Bibles, it was not carefully read and was still less understood by many of its disciples. It reintroduced the habit of metaphysical abstractions among the theorists of democracy, and by its doctrine of the general will it made possible the mystic identification of a leader with his people, which has no need of confirmation by so mundane an apparatus as the ballot-box. Much of its philosophy could be appropriated by Hegel5 in his defence of the Prussian autocracy. Its first-fruits in practice were the reign of Robespierre; the dictatorships of Russia and Germany (especially the latter) are in part an outcome of Rousseau's teaching. What further triumphs the future has to offer to his ghost I do not venture to predict.
And then there's Kant, who doesn't really belong here, but at the moment I don't want to give him a page to himself, and Russell has him in the "Romantic" tradition. See-also Kant's Cats where Popper tries to make sense of him. Kant is held to be "difficult" and obscure, and I've not read him; and of course I'd be reading a translation, which will inevitably filter in the translators ideas, because Kant is so obscure as to be hard to translate, unlike Popper. Anyway.
One of Kant's proofs of the existence of God is given as The argument is that the moral law demands justice, i.e. happiness proportional to virtue. Only Providence can insure this, and has evidently not insured it in this life. Therefore there is a God and a future life; and there must be freedom, since otherwise there would be no such thing as virtue. This is an interesting thought, but obviously also bollox.
There's also Kant's apparent belief in what I think are called synthetic a priori, which is things not of pure logic that can be deduced outside of actual experience. Of which - I think; but it is obscure, and his defenders obscure it more - the Euclidean nature of Space is one. As Russell puts it: The transcendental (or epistemological) argument, which is best stated in the Prolegomena, is more definite than the metaphysical arguments, and is also more definitely refutable. 'Geometry', as we now know, is a name covering two different studies. On the one hand, there is pure geometry, which deduces consequences from axioms, without inquiring whether the axioms are 'true'; this contains nothing that does not follow from logic, and is not 'synthetic', and has no need of figures such as are used in geometrical textbooks. On the other hand, there is geometry as a branch of physics, as it appears, for example, in the general theory of relativity; this is an empirical science, in which the axioms are inferred from measurements, and are found to differ from Euclid's. Thus of the two kinds of geometry one is a priori but not synthetic, while the other is synthetic but not a priori. This disposes of the transcendental argument. Or in other words, Science 1, Philosphy 0. Again.

* Quotation of the Day… (CH) Expanded social insurance and safety net programs for lower- and middle-income households reduce the need for those households to accumulate assets...
* Loyalty Oaths Compared: An Orwellian Exercise by Bryan Caplan; or Public Choice: The Normative Core.
* RELAX -THE METER WILL RUN BACKWARDS TIL IT MELTS
* My 2019 Op-Ed on California wildfires - Brian chez Eli.
* SAGE versus reality - James; not forgetting the Weekly RRRRRRReport.
* Is Middle-Class Stagnation a Myth? - DBx.
* The days of the future stand before us like a row of little lighted candles - C.P. Cavafy via TF.
* What Is Populism? The People V. the People by Pierre Lemieux
* It's Complicated: Grasping the Syllogism by Bryan Caplan: interesting, but not one of his best.
* An Unpersuasive Book with Some Encouraging Insights - Henderson on Raghuram Rajan's "the Third Pillar".
* The American Dream Is Not Dead (But Populism Could Kill It).
* A cheer for Ginsburg, and a wish that she retired in 2013.
* Ruth Bader Ginsburg died on September 18th - my take
* 'The Social Dilemma' and The Last Fucking Thing I'll Ever Write About Facebook by Antonio Garcia-Martinez
Posted by William M. Connolley at 8:07 pm 1 comment:

After Bad beekeeping 2020 we come to the autumn edition. Here's the "before" picture, though I admit that, almost unbelievably, this is after some tidy up. The huge green leaves to the left are a horse raddish, or so I was assured. I've not tried to dig up the roots. 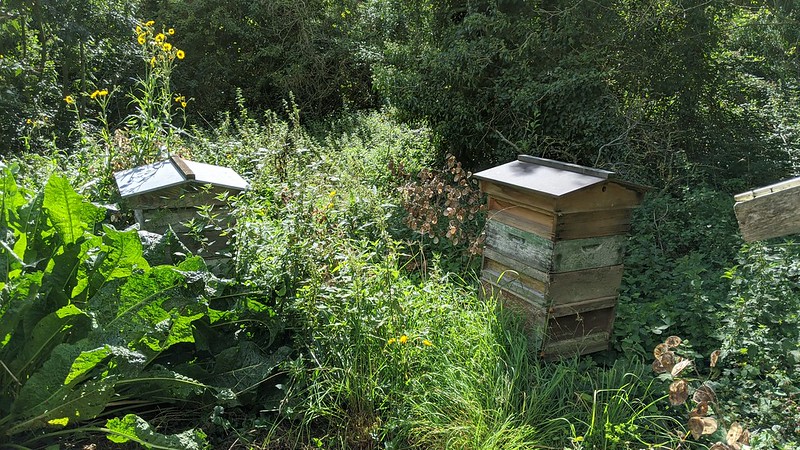 A bit more hackery got me access to both, and now it's time to open up. Notice the smoker is more gaffer tape than anything else. 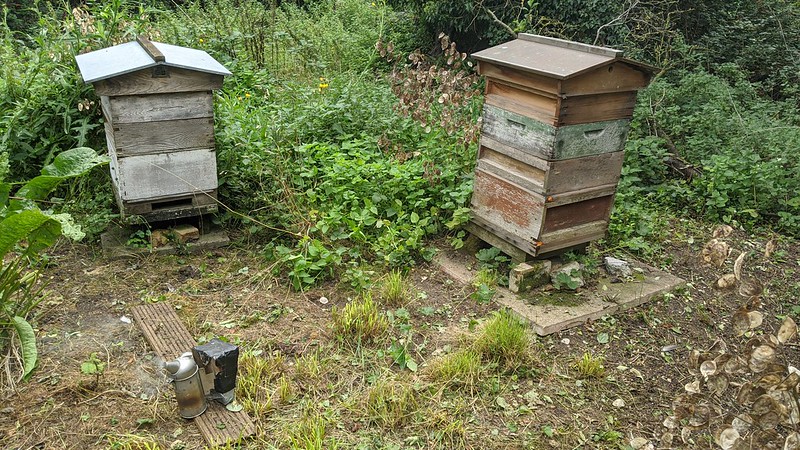 "Old Faithful" on the left. I only opened up the top super, which is mostly full. On the right, a filled frame from the middle; on the left, a largely empty frame from the edge. Needs emptying really to give them some space come springtime. Note hive tool: also excellent for weeding between paving slabs. 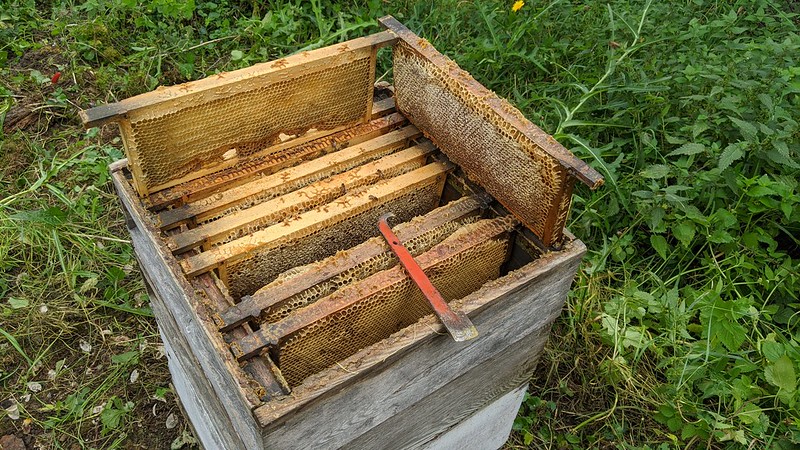 On the right, "Coppertop" with three supers. The top one is somewhat less full than OF... 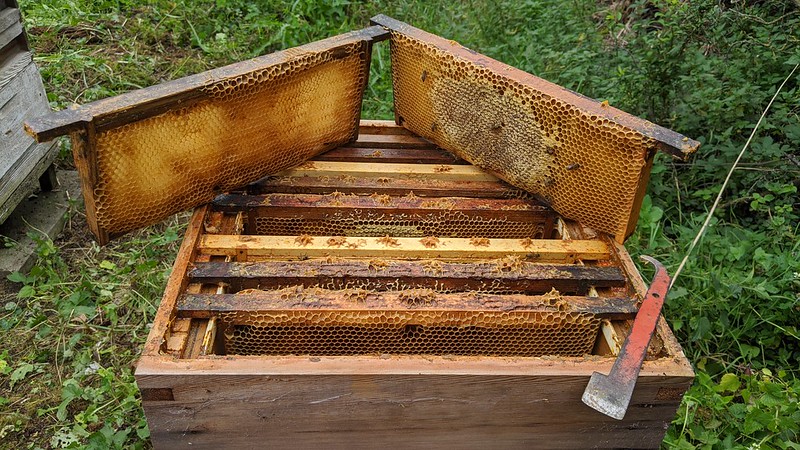 ...and the middle super was completely empty, the bees having ignored it in preference to the heights. Well, they're like that sometimes. 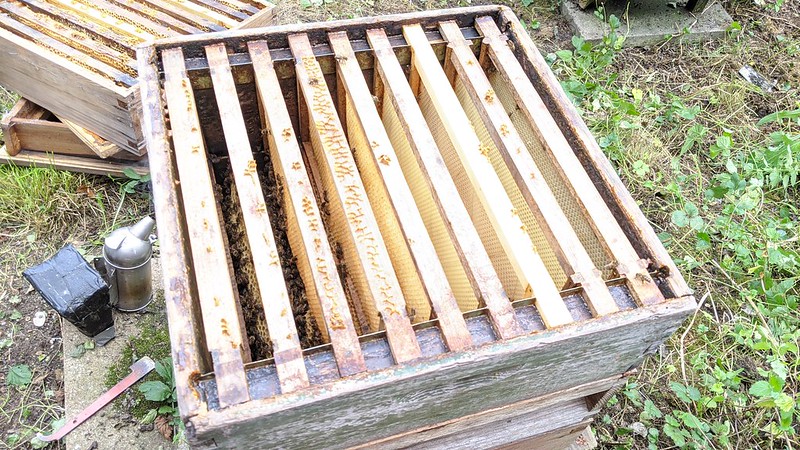 So I've ordered some Apistan to treat them, and when that turns up will set to and take off some of their excess before winter sets in.

A few days later - the 12th - was a sunny Saturday with little wind, perfect for taking off some honey, and putting in my Apistan. The pix below are largely for my mythical records. Let's start with OF; here we are at the brrod box, with the comb looking mighty dark, time for some refresh come spring I think. 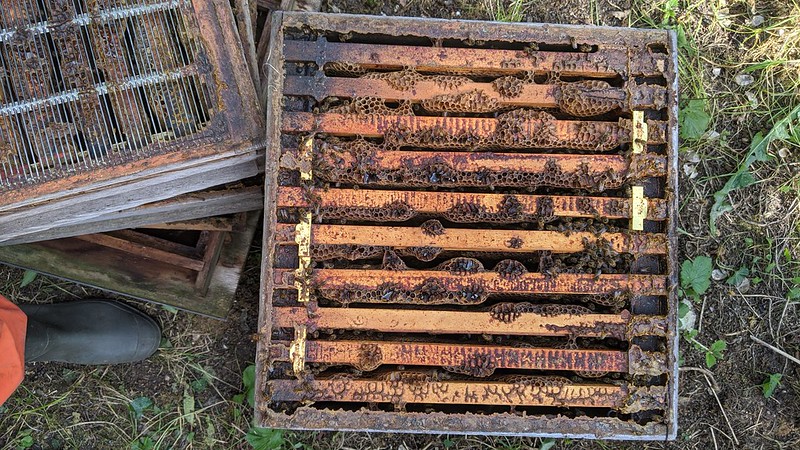 I took out five frames - here they are - from the top. I can't recall looking at the lower super much; but from the recalling lift, it was maybe half or two thirds full. 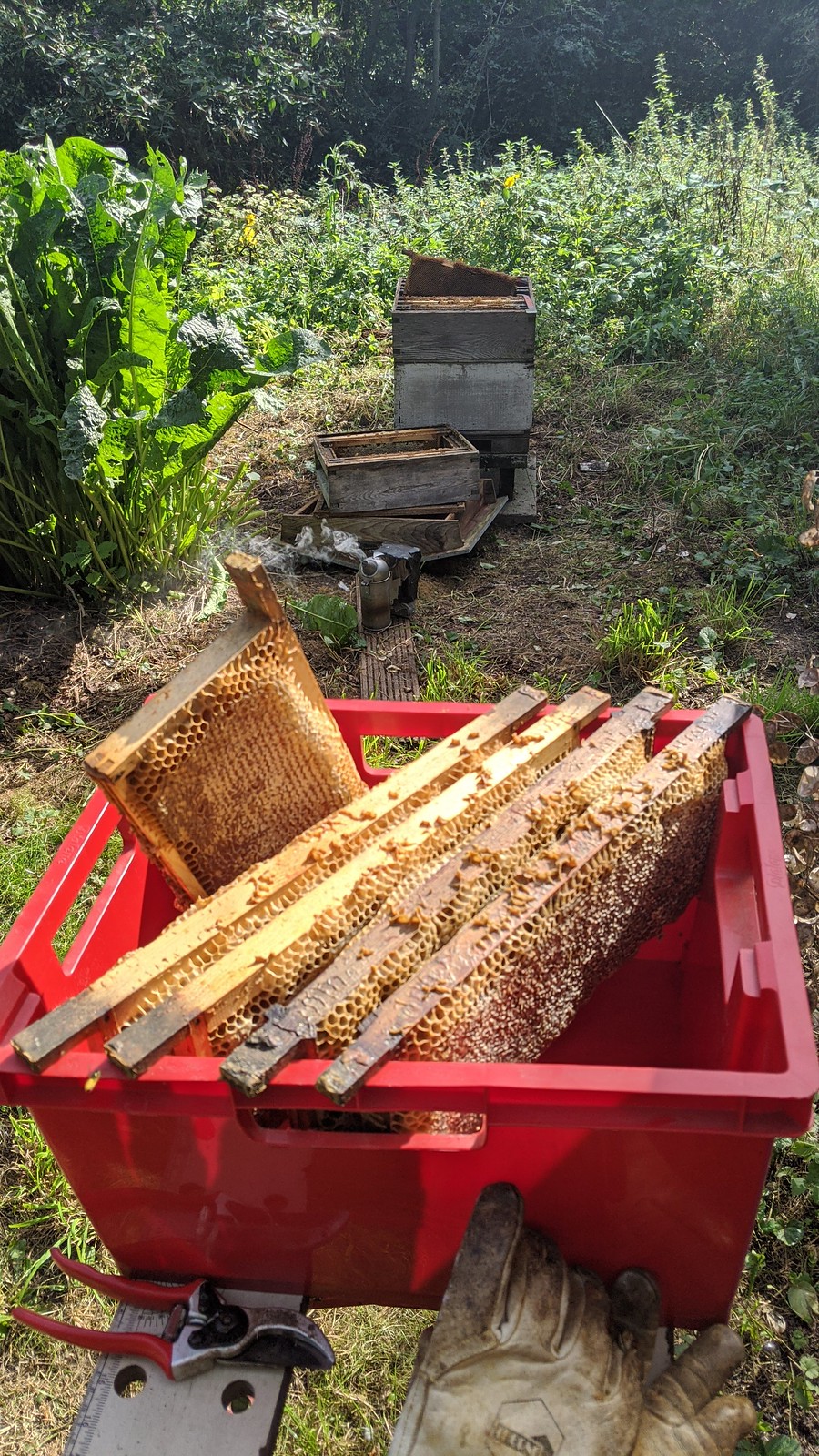 Oh yes I recall now: fairly busy, but mostly uncapped; here's an example. So I left it. 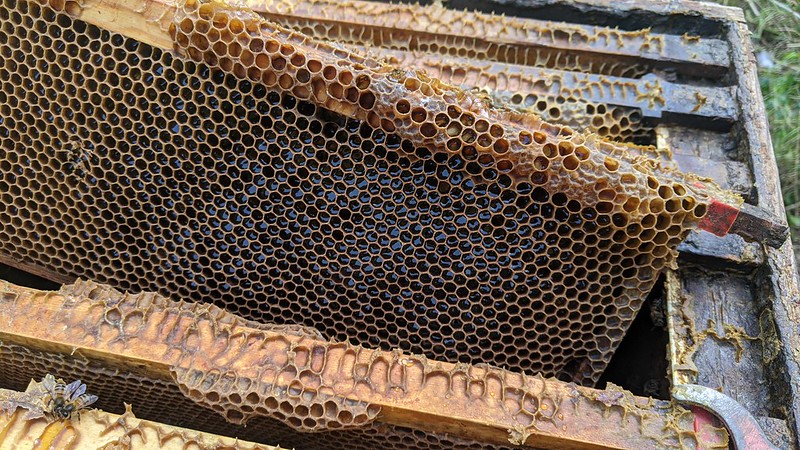 Here's CopperTop's brood box, with the tabs of the Apistan showing where I've inserted them. I'm a bit late doing this, so finding time to take them out will be tricky. The new queen excluder here has too much space underneath hence the blobs of comb / honey; and also the mesh is falling away from the frame, must find some time to repair that. 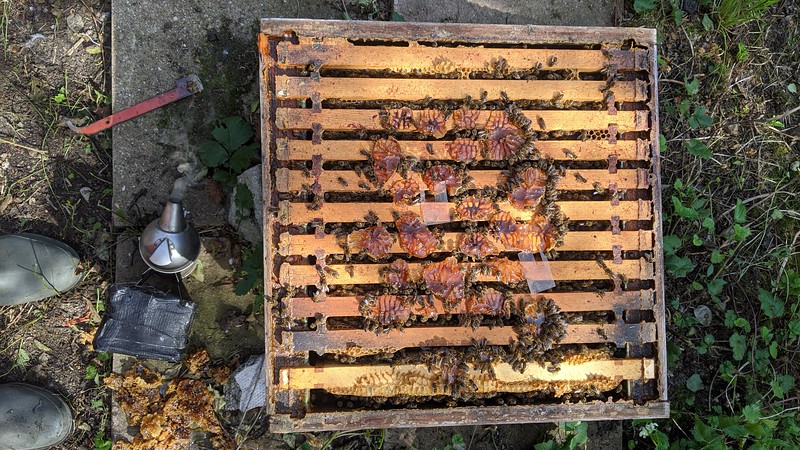 And here's CT just before reassembly, with OF in the background. 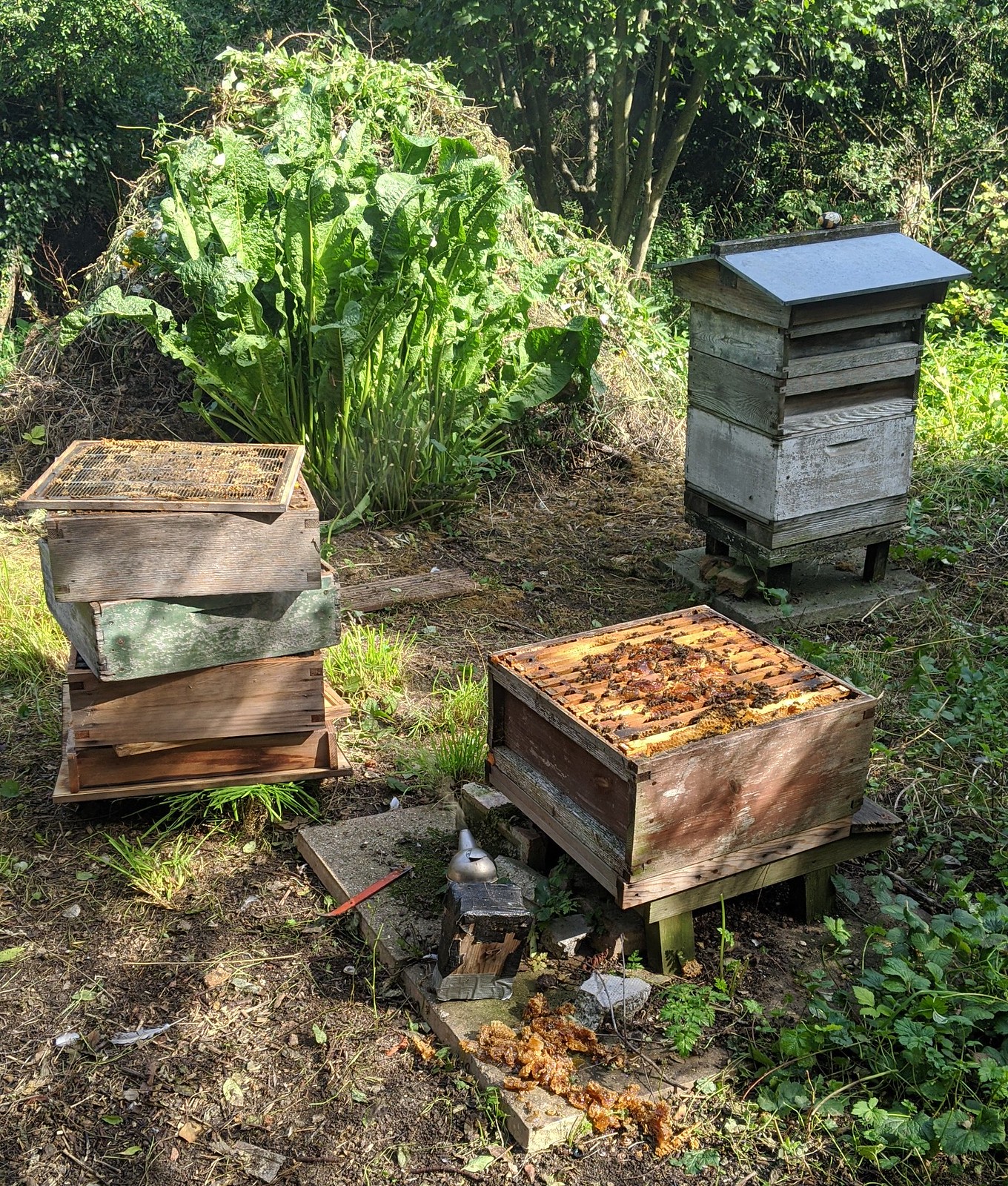 I took four frames out of CT, for nine in all, span them that afternoon, getting about 16 lbs, which is decent for ~one super, effectively. Tracking mark: WMC-2020-A(utumn); and -W(arm) for that which I heated. 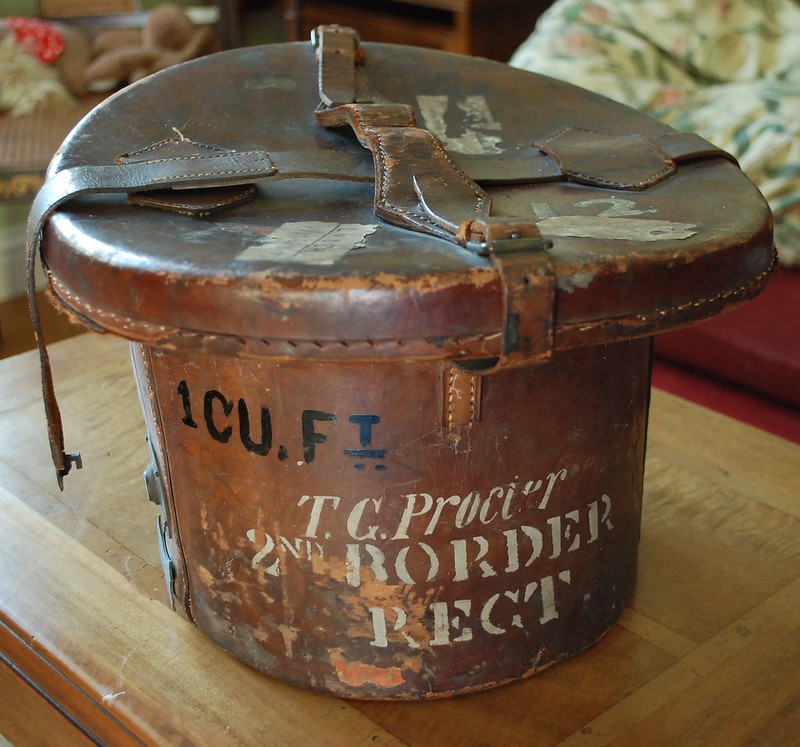 I'm (re)reading, for various purposes, Russell's A History of Western Philosophy. As with so many things outside my field, the problem is to find reliable opinions. I like Russell's text. Unlike many books discussing other philosophers, Russell is not afraid to speak his mind and has meaningful opinions1. Far too many others are so in awe of their subjects that they say nothing useful about them. Looking at the wiki article I can see he has wound up the usual suspects, which is a good sign. Who can forget the immortal The critic George Steiner, writing in Heidegger, described A History of Western Philosophy as "vulgar", noting that Russell omits any mention of Martin Heidegger.

However, I think he gets Aristotle's Politics wrong. Firstly he misses its practical nature, in comparison the the idealism of Plato. There is far more discussion of what actually happened; and different constitutions. And secondly, he misses - I think due to his egalitarianism, or equalitarianism - what I was pushing before: that simple majoritarianism isn't a good idea.

* The text is available here.

* What Is Populism? The People V. the People by Pierre Lemieux

1. Example: I conclude that the Aristotelian doctrines with which we have been concerned in this chapter are wholly false, with the exception of the formal theory of the syllogism, which is unimportant. Any person in the present day who wishes to learn logic will be wasting his time if he reads Aristotle or any of his disciples. None the less, Aristotle's logical writings show great ability, and would have been useful to mankind if they had appeared at a time when intellectual originality was still active. Unfortunately, they appeared at the very end of the creative period of Greek thought, and therefore came to be accepted as authoritative. By the time that logical originality revived, a reign of two thousand years had made Aristotle very difficult to dethrone. Throughout modern times, practically every advance in science, in logic, or in philosophy has had to be made in the teeth of opposition from Aristotle's disciples. Compare The Stanford Encyclopedia of Philosophy or Wiki.