Opinions alter, manners change, creeds rise and fall, but the moral law is written on the tablets of eternity 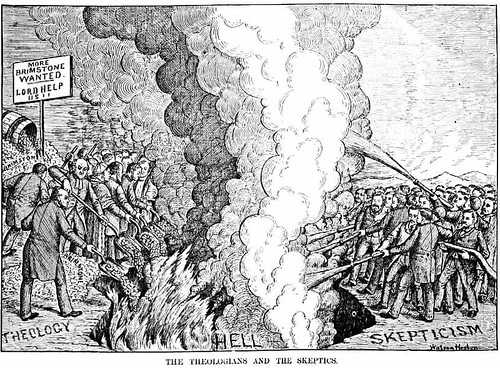 A quote, from Lord Acton. And apparently an inspiring one, since (inevitably in this day and age) you can get it on a fridge magnet. If Lord Acton's Philosophy of History by Crane Brinton in The Harvard Theological Review can be believed, it is the basis for his judgements of history; for his theory of history. But, is it true? I think not: from my conclusion there: morals, law and politics are under-determined by the defensible theoretical foundations. And thus, different people / groups build conflicting superstructures; and fail to realise that the bits they disagree about are the optional bits.
That it isn't true is likely going to be a problem for Acton, I suspect; though I haven't quite ground through the Liberty Fund edition of some of his works; so the exact nature of the flaw it causes in his reasoning is yet to be revealed. Acton was a staunch Catholic2, so I suspect (somewhat like Doubty Descartes) he managed to convince himself that all morality must necessarily equate to his church's morality.
I note that history, and recent history, teaches us that most problems don't arise from this little matter, but through much coarser problems of poor governance or poor thinking.

* Paul Graham explains philosophy. Note the "confusion over words" recalling Popper.
* ACX: Justice Creep.
* DB: quote of the day, discussing Hayek: Perhaps, as seems to have happened today (as it has in the past), the people begin to distrust all claims to expertise and seek simpler, more intuitive, solutions.
* Cowen on Labor Econ Versus the World by Bryan Caplan
* Security course at Cambridge
* Is accurate forecasting of economic systems possible? An editorial comment; by Irene Scher & Jonathan G. Koomey
* Reflections on the Ukrainian Refugees by Bryan Caplan
* Said Marcus Garvey, in urging blacks to undercut union wages as a means to employment and combating union racism, “the only convenient friend the Negro worker or laborer has in America at the present time is the white capitalist.” - via CH.
* Idol Words - ACX.

1. My picture is from The freethinkers' pictorial text-book: showing the absurdity and untruthfulness of the Church's claim to be a divine and beneficent institution and revealing the abuses of a union of church and state by Heston, Watson.
2. Staunch in the faith, but at the same time believing in liberty, and hence implacably opposed to papal infallibility.
Posted by William M. Connolley at 8:01 pm 16 comments: 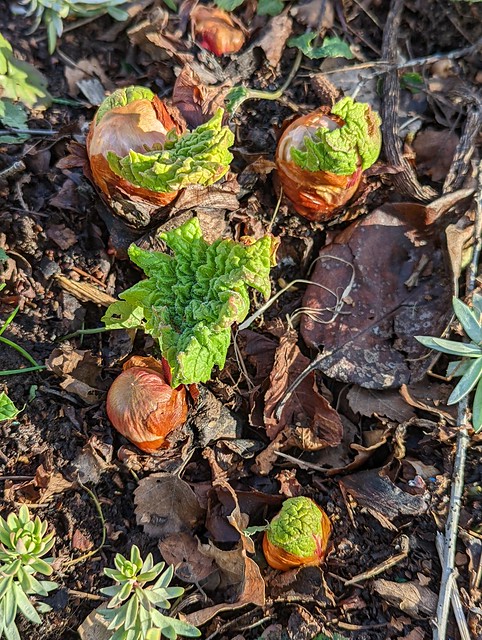 No doubt about where I stand, then1. Ukraine: Work as if you live in the early days of a better nation kinda refers; it is interesting to review the comments there, especially: "The last thing Putin wants is another Chechnya or Afghanistan". I nearly wrote something when the Russkies were massing on the border, and then nearly wrote something soon after; but am able to resist no longer. Don't look for any informed analysis, mind you.
So, the situation: after massing troops on the border for "exercises" for months, the Evil Empire finally decided to invade Ukraine. And it seems to be going badly for them6: the expected swift progress has not materialised, the Ukrainians are fighting back, and the Cold West has gathered it's courage and imposed significant sanctions4 and handed over a few anti-aircraft and anti-tank weapons, which I support. The price of oil and wheat is up, but... well, we'll worry about that later.
Many things are unclear, including why the Evil Empire decided to do this. Mostly, that means why Putin decided to do this: for it is a country almost without checks and balances, run - it would appear - by the whim of one man. And run badly2. I decline to speculate on exactly why they did this stupid thing; there are quite enough speculations out there already, feel free to pick your own. But the pattern - of an Evil Autocrat getting into power - is sadly all to common: Gaddafi, Assad, Putin3. It becomes clear that governance is hard, and perhaps we have been mislead by the success and growth of democracies in the last, say, century; it is all to easy to suppress the voices of the people.
Making predictions at this point is unwise, but I will express my hopes that the plucky Ukrainians remain plucky, and stall the Russkies for long enough for the assault to fall apart; this does not seem implausible. More tenuously, I could hope for Putin to be overthrown, but this seems unlikely; more realistically, for him to not escalate to implausible levels (nukes; or mass indiscriminate shelling of cities). The difficulty there is seeing what could be a plausible endgame: perhaps, the answer is that he, like his army, is not as formidable as appeared, and will retreat to oppressing his own people instead of someone else.
We have, unexpectedly, what is effectively the gift of a carbon tax7; but I don't see anyone being grateful. Am I grateful? Perhaps I am. The extra is going to those that pump oil not governments, but I don't find myself too bothered by that. That it is happening so suddenly, and it cannot be predicted how long it will last, is regrettable.

What is Putin afraid of?

The foolish rhetoric does, as usual, hide a kernel of truth: that Putin is afraid of Russia gradually failing, and happy joyful prosperous free market economies springing up around it. In the long run, Russian failure under Putin was inevitable, even before this stupid war.

1. Yes, I know: safely in England well away from any fighting.

2. I think that a country run without checks-and-balances by even one good man would be badly run, but Putin is without doubt not good, indeed he is bad.

3. Most of the Gulf States are hardly paragons of democracy and we prop them up, so I can't say the West is blameless in such matters either.

4. But see-also Bryan Caplan on sanctions. I'd like to think we could manage more imaginative policies like Make Desertion Fast but our leadership can't think fast in unexpected ways. Or perhaps even slowly.

5. My image is a reminder that hope - or at least rhubarb - springs eternal.

6. Hurrah! Nonetheless we must remember that it isn't the individual Russkies who are evil - mostly - it is the system they are trapped in. Although, if they could stop believing in dumb myths about pan-Russianism or whatever, that would help.

7. Except (2022/06) Ted Nordhaus: Russia’s War Is the End of Climate Policy as We Know It: Ironically, geopolitical strife and energy scarcity will do more for the climate than decades of ardent policies.

The flower of poor thinking is to lack influence 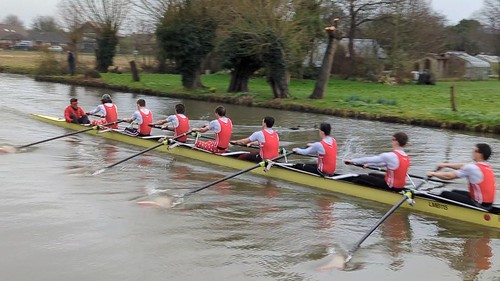 Or, The First Step Toward Saving the Planet Is Ignoring the Economists by Andrew Dessler in Rolling Stone. You may well say that being published in Rolling Stone gives you more influence than a humble blogger and I would be forced to agree. So it goes.
Speaking of how it goes, my picture shows LMBC rowing over comfortably ahead of Caius to retain the Lents headship. For connoisseurs of mud, the towpath was horrible, since it rained, lightly, almost all week. But despite the Covid-induced break, everyone seemed to remember how to bump.

The nub of AD's analysis is "The U.N.’s latest climate report shows that we don’t know how expensive the climate crisis will be, which means cost-benefit analyses weighing how to combat it are pointless". The new report is really quite long though, and AD doesn't provide any quote from it demonstrating that his assertion is true, so I think that very basic step can be regarded as Unproven (do feel free to provide a suitable quote in the comments). Furthermore, if we genuinely had no idea how expensive it would be, we would have no basis for action at all (a quote below shows this isn't true). However, let's assume that the IPCC (why has AD switched from "IPCC" to "UN"? Odd; perhaps he is trying to put off the right wing nutters) does indeed say that; why would it demonstrate that economic thinking, including CBA, is pointless? His end point is revealing in this regard: As the latest IPCC report says, “The cumulative scientific evidence is unequivocal: Climate change is a threat to human well-being and planetary health. Any further delay in concerted anticipatory global action on adaptation and mitigation will miss a brief and rapidly closing window of opportunity to secure a liveable and sustainable future for all.” Do we really need a cost-benefit analysis to convince ourselves to address this threat? Taken all that at face value, no, we don't need a CBA to decide to do something. But we do need a CBA to decide what to do. Because a large number of solutions from different people are proffered, and we cannot do them all; and many of them, whilst appearing brilliant and obvious to their proponents, appear stupid to others. How shall we decide what to do? Shall we just accept arbitrary diktak? Or should we do... that which involves least use of resources?

I have said this before - but cannot now find it, so will have to repeat myself - that avoiding economic thought is often a way of saying "do what I want". Which is generally bad.

AD's prime example of why CBA is bad is During the Obama administration, the social cost of carbon... was estimated to be $35.  The Trump administration altered some of the assumptions that led to his estimate, particularly how much they valued future generations versus ours, and how much they valued people outside the U.S. versus those who live in America. They estimated the social cost of carbon to be as low as $1. But this was politics, not economics. Calling CBA bad because of Trump is just dumb.

Is there any virtue to AD's piece at all? If there is, it isn't the quoting Franta bit. His discussion of "Obama’s climate bill" isn't great either: although, as he notes, some made hyperbolic claims about the costs, he is firstly wrong to attribute those claims to economists: they were made by pols. Secondly, he is wrong to assert that reality disproved those claims: since the bill didn't come into action, we'll never know what costs it would have had. Thirdly, as he mentions but doesn't think about, even without the bill the aims of the bill were achieved. So all those making hyperbolic claims about how necessary the bill were, have been proved wrong by reality. My guess is that AD would have been one of those people, but I can't be bothered to find out.

* The flower of justice is peace

* A Populist Attack on Big Tech by David Henderson

* Not So SWIFT by David Henderson; A SWIFT and sure way to punish Russia by Scott Sumner

* "It could be said of democracy that all theory was against it and all experience for it." - TF

* What Should Economists Do Now? by Mikayla Novak

* The Age of the Judicial Thoroughbred aka Benjamin Barton’s The Credentialed Court.

* The ETS is stupid, part n

* Waging the War of Ideas, via What the EA community can learn from the rise of the neoliberals, via ACX.

* The Actual Food Problem - via Timmy. Not sure it is, but "fertiliser used to be 55 per cent of the cost of his business, but will now be near to 80 per cent..." is interesting.