It has been a long dry summer in Europe. This is obvious enough from the news for anyone paying attention; this post merely collects some observations from my recent trip to the Swiss alps. To add a couple of parochial matters: the Great Ouse (half) Marathon was cancelled due to low water levels; as was the Peterborough Summer regatta. But back to the alps...

The path from Felksin to the Britannia hut has dramatically changed since I did it (at about the same time) last year (GPS: traverse; lakes). All the snow has gone, and the glacier shrunk. But do I have the pix to prove it? Not as well comparable as I'd like. Here's 2021: 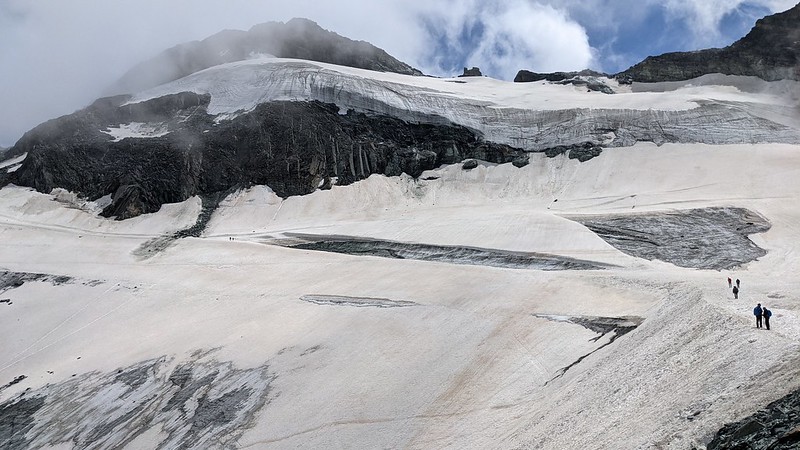 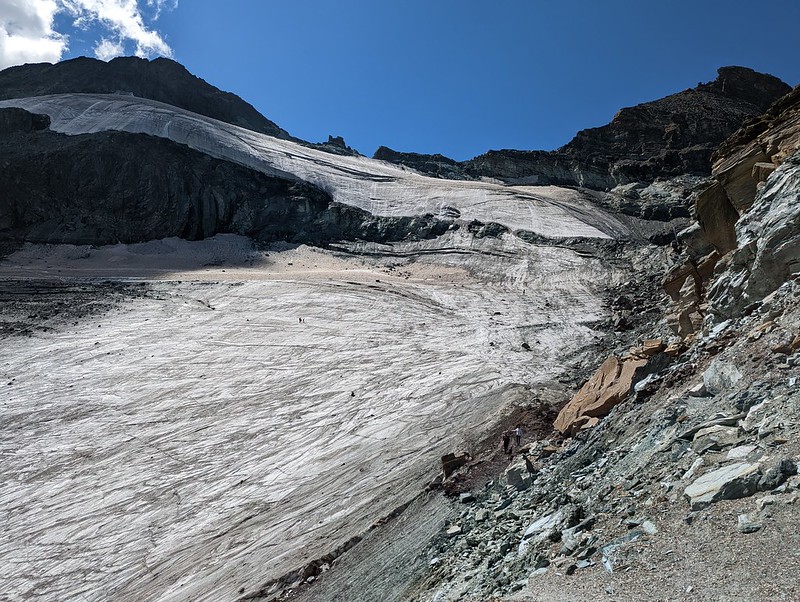 All the snow is gone. Which is annoying, because snow is much easier to walk on than ice. But the "ramp" down onto the glacier is totally gone too, transforming an easy stroll into a rough path. Further round, the "traverse" route over snow is gone, so you have to go the "lakes" route, which is half an hour longer and more work. Indeed, in theory the route from Felskin is closed from 11th August, and the alternative is to climb up an extra 500 m from Morenia. 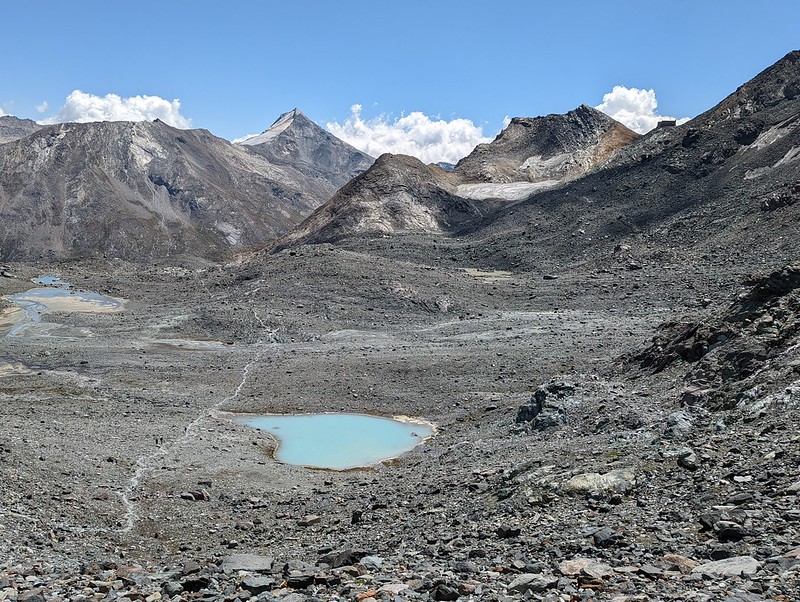 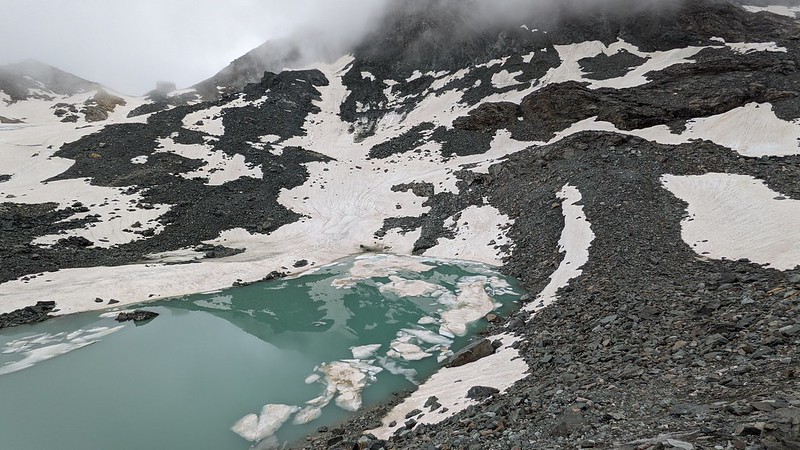 Although to be fair that isn't convincingly anything other than annual variation.

Higher up, on the Allalingletscher, I don't have good pix for comparison, but what I happily walked on last year solo with barely a "woo, there's some crevasses here under the snow, I really ought to walk carefully" was replaced by a "well we may be roped together but we're having to zig-zag through this ugly crevasse field" because all the snow bridges had melted out. And there was no snow, just bare ice, until about 3300 m.

We had a second similar experience from the Monte Rosa hut. Last year, again, I was at the "woo, there are some crevasses here" stage: 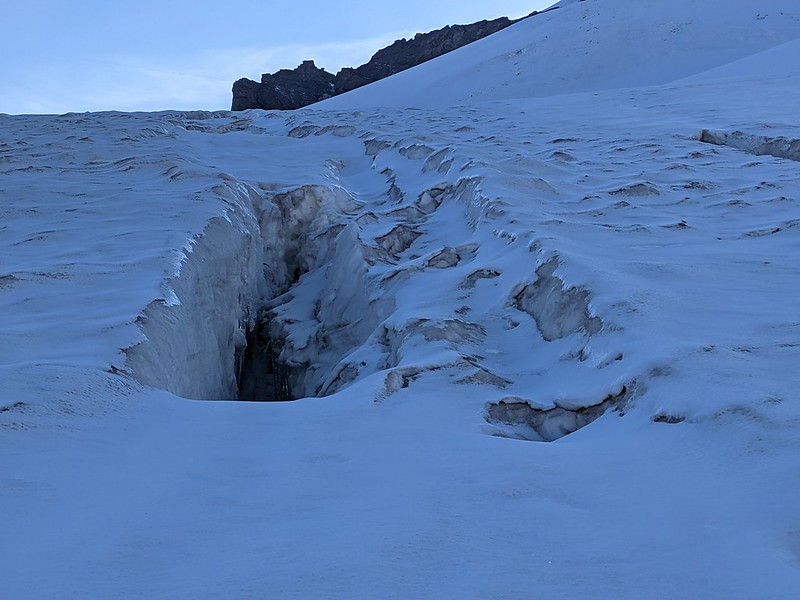 But this year it was "FFS, how are we supposed to get through this?": 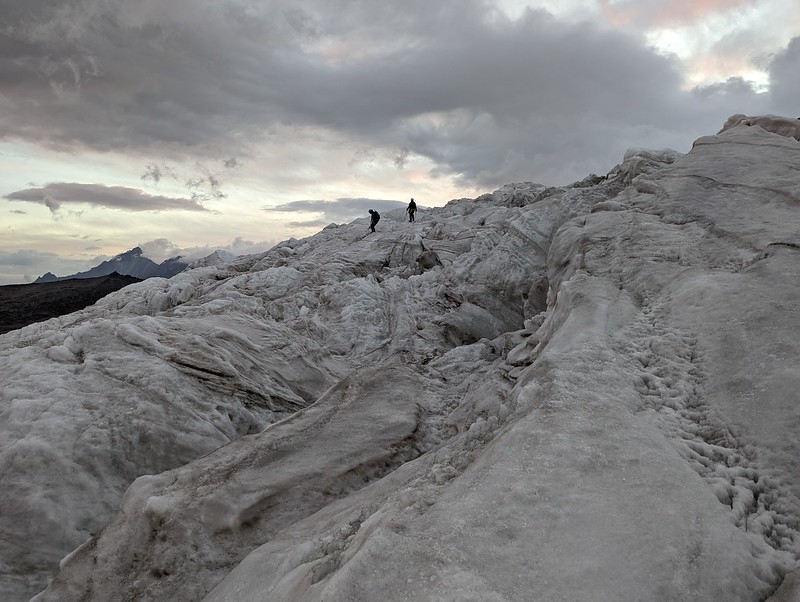 That picture actually makes it seem better than it was; what it was, was impassable, at least for us, though some others did get through.

Others: a newspaper article about the ice melting. And several huts had run out of water; either because their snowpack or streams had gone.

Posted by William M. Connolley at 3:50 pm No comments:

I'm back; I trust you missed me. Below, Le Grand Combin, very nice. No I didn't climb it. 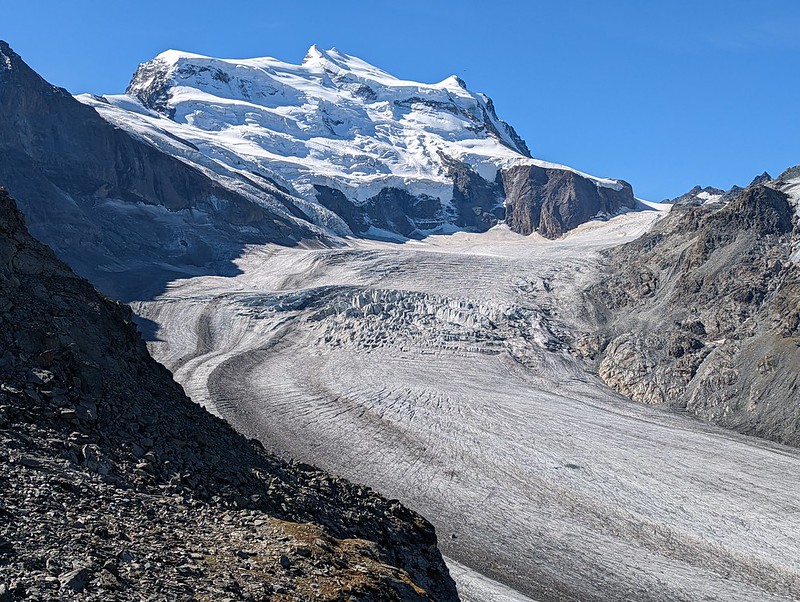 Switzerland again; some climbing, some walking. A full report will follow. It was a very dry summer. 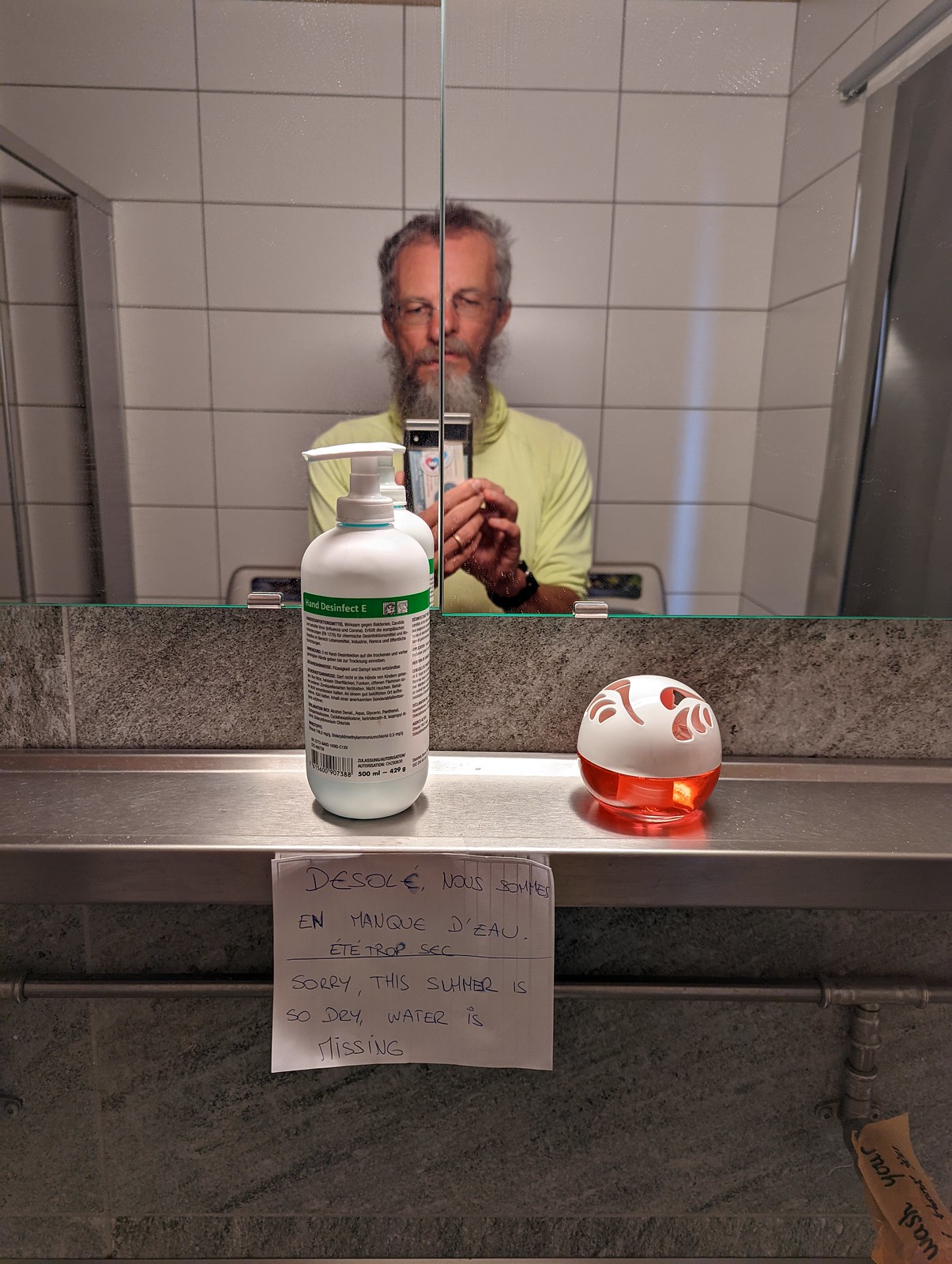 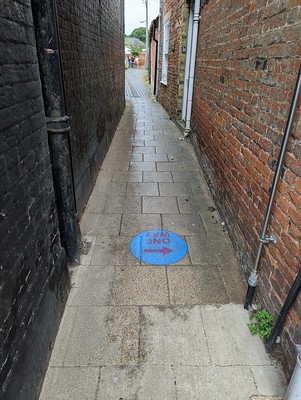 Or, Climate endgame: risk of human extinction ‘dangerously underexplored’. The latest fad is to argue about the tone of reporting, and complain about or push "doomerism", as an alternative to doing anything useful. Although since the people doing the chattering aren't capable of doing anything useful - that tends to come from the people doing solar panels and windmills - perhaps it is all harmless enough1. It comes from Climate Endgame: Exploring catastrophic climate change scenarios featuring that nice Tim Lenton.

Anyway, I got as far as We know that temperature rise has “fat tails”: low-probability, high-impact extreme outcomes (9) before giving up. Because: ref 9 is, and I kid you not, G. Wagner, M. L. Weitzman, Climate Shock: The Economic Consequences of a Hotter Planet (Princeton University Press, 2015). FFS: it is a pop-sci book. You can't use that as a ref in a serious paper; therefore, this isn't a serious paper.

1. Harsh and not fair; I exaggerate for effect.

* With all the hype about the heatwave, it’s worth having a bit of perspective - JA. Heat vs Cold deaths. And a reply from Gavin. And an ACX post; thanks A.

* Gavin attempts to shortcut the problem, but it doesn't work.

* The Skull Beneath the Skin - Hayek and Atavism; Q: if I look in antient Greek plays, do I find warnings of this?

* Blame the Principals - BC