Assessing the relative contribution of economic, political and environmental factors on past conflict and the displacement of people in East Africa 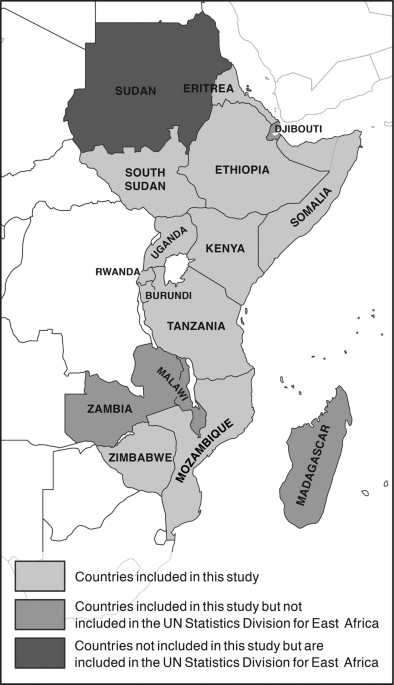 Assessing the relative contribution of economic, political and environmental factors on past conflict and the displacement of people in East Africa (note: although that link is to nature.com, the journal appears to be Palgrave Communications. This is slightly confusing, but never mind) by Erin Owain & Mark Maslin says


...this study analyses whether climatic changes between 1963 and 2014 impacted the risk of conflict and displacement of people in East Africa... found that climate variations as recorded by the Palmer Drought Severity Index (PDSI) and the global temperature record did not significantly impact the level of regional conflict or the number of total displaced people (TDP). The major driving forces on the level of conflict were population growth, economic growth and the relative stability of the political regimes... Instead, we suggest rapid population growth, low or falling economic growth and political instability during the post-colonial transition were the more important controls...

I've elided a bit there that I'll come back to, but I'm showing the important bit. This via an article on it at the Conversation. I find this unsurprising, because I said much the same in Infertile Crescent: these people's major problem is that their government is crap. As O+M point out, Halvard Buhaug reached much the same conclusions in 2015, and nicely notes that journals and journalists alike appear especially attracted to sensational findings and tabloid conclusions, with the result that researchers are pushed to oversell their findings. Oh, and also it does not follow that a long‐term shift in normal conditions (e.g., a 2°C warmer world) will have the same impact on social systems as a short‐term anomaly of a similar magnitude (2°C above monthly mean). Unfortunately, researchers are often not clear on the distinction between climate variability and climate change, and findings of behavior related to the former are often used as foundation for projecting impacts of the latter. And if you're interested in climate change, and people's vulnerability to it, then In unstable corners of the world, ending violent conflict may be the most efficient and cost‐effective way to improve social resilience to climate change. I seem to have got a bit distracted from O+M, sorry.

Back at O+M: I've just skimmed it. It isn't desperately exciting, I'd say. Their method - take a bunch of things and correlate them against another bunch of things - doesn't seem very powerful, and since there are piles of correlations floating around, some are likely to be significant by chance. The one thing they find is The displacement of people, particularly across international boundaries as refugees, in this region is also shown to be in part driven and exacerbated by intense droughts which can be in part linked to the long-term drying trend that has been ascribed to climate change, which is what I elided from the blockquote, because it's rather minor.

So, there we go. What I thought I already knew is reinforced. If you'd like to be told otherwise, then maybe try Jesse Anttila-Hughes, in particular Different perspectives on climate and conflict.

And to avoid the obvious misunderstanding, neither I nor O+M are suggesting no role for climate change. Just that other things are significantly more important. And also, I'd argue, more fixable. At least in principle. In practice, less so.

I fail to understand how the reference is a reference, it being too subtle a correlation for the retired mind.

It isn't. I tend to use my "references" as a place to put links I find around the same time that are things I'm interested in; it gives me some hope of ever finding them again.

@-William Connolley
"I find this unsurprising, because I said much the same in Infertile Crescent: these people's major problem is that their government is crap."

Is this an argument for better and/or more goverment ?
More effective regulation and intervention in the legal, material, and social infrastructure of the Nation's Agriculture and trade, by government could then have avoided these problems.(?)
Or at least adapted more competently to the combination of population growth and drought induce food shortages.

Is there a counter-example where similar climate change challenges were managed competently by an un-crap government?

In the instances here, the government is so bad that the usual more/less or political spectrum arguments don't apply. A govt that isn't actively hostile to some or all of it's own population, or that isn't simply incompetent, is the need.

A sobering reminder that rising population pressure and stagnating per capita income,outstrips thermometer creep in driving people out of Africa and the no longer golden crescent .

"Is there a counter-example where similar climate change challenges were managed competently by an un-crap government?"

Maybe the Thames barrier? I'm not sure how large the the changes they're supposed to be suffering from are. I rather suspect that such changes are managed with barely anyone noticing by non-crap govts.