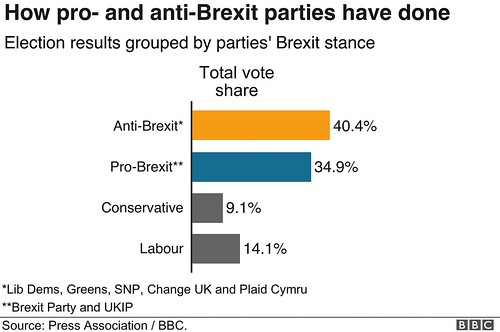 The EU elections provides some test of Brexit. Arguably, they were also about other things, but if they were, I didn't notice those other things and I saw nothing about them in the EU press. VV offers A historical climate election in Germany as an interpretation from Over There if you're interested in the other things.

The graphic here shows one way to think about it, and nicely - sez oi - relegates the two "traditional" "major" parties to has-beens. It also nicely shows that anti-Brexit1 did better than pro-Brexit. If you measure it by vote share. Alas, as is traditional, the good guys split up (mostly into LibDem and Green) and so got fewer seats overall2. Miriam found another analysis that split up the Labour vote as 80% remain, and the Tory as 60% leave (or some such, I forget the details3) and again got Remain ahead in vote share. Another way to measure this is to note that votes for the Brexit Party were 5,244,893; whereas the Petition to revoke Article 50 got 6,085,017 signatures.

But that brings me to my main point, which is that after all the fuss and all the talk and dominating the headlines for months, still only 37% of those eligible bothered to turn out to vote. So the true winner was still the Don't Give A Toss party. And if you believe JA - that Brexit will eventually fall apart under the weight of it's own contradictions - then perhaps they were right.

I voted LibDem, if you care. It was that or Greens. If it had been clear what maximised my chance of a Remain MEP, I'd have done that, but it wasn't clear, so I went for maximising the vote share of a clearly Remain party. So in a way I was in the DGAT party too: I (rationally) didn't bother put a great deal of effort into working out what my "best" vote was.


1. But never call yourself anti-X; because it concedes a part of the argument to X. Arguably, in this case, correctly. I am more strongly anti-Brexit than I am pro-Remain, if that makes any sense. On the grounds that our MPs are too much of a bunch of clueless incompetents to manage Brexit.

2. The Change UK people, who look increasingly like roadkill, got stoated as I think they deserved. Their problem is that the only sensible thing for them to do is to merge into the LibDems, but they can't quite bring themselves to do it.

3. Ashcroft's poll provides enough info to do the split yourself, if you want to: So while Leavers and Remainers have gravitated to parties who are unambiguous about Brexit, those who have stuck with the main parties are also polarised: two thirds (67%) of Tory Euro-voters want to leave the EU, while nearly two thirds (63%) of Labour Euro-voters want to remain.

But the 150,000 elderly folk who make up the bulk of the Tory Party membership want Boris for PM. All Boris has to do when PM is nothing for No Deal Brexit to happen: he can spend the time making up excuses why what happens after is not his fault.

> All Boris has to do when PM is nothing

I'm doubtful that's true. Because as we've seen and so now have recent precedent for, Parliament is actually capable of getting off it's fat arse if pushed hard enough. That would get messy, but I doubt BoJo has the stomach to try to face them down. Or anyone else, for that matter. Which leads us back to the only thing being acceptable is another extension.

"Which leads us back to the only thing being acceptable is another extension."

although this is not entirely in the UK's gift

Just revoke - how much longer must we tolerate a bunch of unicorn herders, their associated idiots and realty deniers!!


*the WA is simply Brexit reality typed on A4 paper

I would be happy with revoke, indeed it is (a) my preferred option and (b) what I hope we'll come to in the end. But I'm doubtful we'll get to it without a great deal more farting around. Which farting around will even more de-legitimise the political class as it will become ever more obvious that they are useless. They will then gormlessly wonder why support for mainstream parties is falling.

"They will then gormlessly wonder why support for mainstream parties is falling."

indeed the longer you entertain the fantasy of a "jobs first Brexit" "Global Britain" "Empire 2.0" yada yada - the harder it becomes

You will always have a hardcore of the fundamentalist flatearthers/Brexiteers - both models (the flatearth planetary model and Brexiteers planetary model) conflict with observable measurable reality - the media and politicians should stop indulging them - the longer it goes on the harder it will become to simply say to "moderate" leavers "sorry you have been mugged off - "although the earth looks flat it is indeed an oblate spheroid - just as the experts say".

we now have a situation were a "no deal" EU exit AKA ripping apart virtually every trade agreement that underpins our economy at 1 sec past a random point in time, is openly discussed on the BBC and seems official Tory policy!!!

Even during the referendum campaign the prospect of a no deal Brexit was denied by the Leave campaign. They went so far as to construct a fantasy where German car manufacturers would insist on favourable trading terms with the UK to protect their market here. No deal only became fashionable with leavers once that fantasy had evaporated.

"I am more strongly anti-Brexit than I am pro-Remain, if that makes any sense. "

Oh go on then I'll explain. For my own future reference if nothing else.

As I've said in posts ref'd here, it is very hard to feel any enthusiasm for the cumbersome institutions of the EU, even if I can be happy with things like freedom of movement. Too many EU pols have entirely the wrong idea about how govt should work and what the reach of govt should be, and this same attitude infests the EU institutions. And don't get me started on the idiocy of their cookie consent law which ha made the world worse for everyone.

But at the same time I can't see our idiots pols as capable of negotiating an exit, so I'm opposed to Brexit. It has been clear for quite some time now that if we were going to leave, the only sane way to do so is with no deal, because the EU deal on offer is worse than not leaving. But our pols are clearly not brave enough to do that (the ones that are in favour of no deal are, I think, not brave, just blind).

Note that there is absolutely no reason why the EU could not offer (unilateral) FoM post Brexit. They pretend to think it a good thing, and they are correct, but they won't follow the logic through. It is much like free trade: every country should offer it unilaterally, and not use it as a stupid bargaining counter as all countries stupidly do.

Thank you for your perspective, William.
I wish the UK would stay in the EU.
But even when you leave, I will always love you guys.

The EU is not perfect - by any stretch, who/what is? (my wife excepted) but it does a pretty good job at facilitating frictionless trade amongst 500 million people - as easy to sell goods (services) in two adjoining towns in the UK as it is to sell them in Salzburg or Warsaw.

and comes with cute features like frictionless travel (I have driven, with my family across Europe in a day - crossing 6 odd countries - no paper work and same currency - that's pretty cool)

it has a few downsides - the cookie thing to name one, the daft ruling that car insurance cannot discriminate based on gender/risk, another


If you were gullible enough to believe the line that we could retain all the (unspecified) benefits of EU membership, but none of the obligations - and this was self evident because of [reasons]

Then voting leave was the rational choice

I discussed that in December. It is a long carefully constructed well reasoned post delving into teh fine details of a tortuous and subtle matter, and received zero comments :-(

My conclusion though is that the EU charter of rights is broken.

Is good. But, they've achieved that in part by pushing the friction to the boundaries of the EU. Logically, there is no reason why the UK could not leave the EU and retain frictionless trade. But, in practice, it cannot.

"Logically, there is no reason"

Well no. Free trade *within* Europe; not into or out of.

This is semi-analogous to Daisyworld, if you recall that. The daisies stabalise the temperature, with a range; but at the cost of far greater jumps outside the range (of course whether the EU free internals causes more friction at the borders is a different question, and I have no knowledge of it).