The electricity mix during two weeks without coal in Great Britain 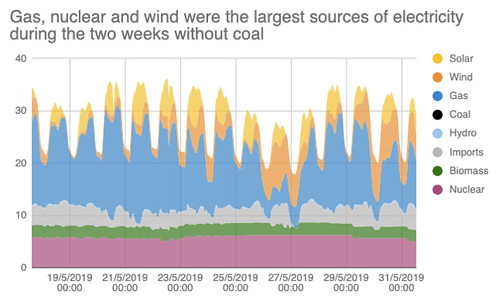 A nice pic of  the electricity mix during two weeks without coal in Great Britain, from CarbonBrief. Nukes are near-constant, as expected, as is biomass; gas is reactive; solar and wind are variable. I wonder what we ascribe the imports to? French nukes probably.

This shows I think that there is scope for more solar and wind before getting problems with running out of the gas+imports buffer, but that we'll start hitting limits eventually. An alternative view is provided in this twit, showing percent not absolutes, but it is somewhat misleading; notice how nooks look like they're variable, but of course they aren't.

Some people are very anti-gas, including the predictably-wrong David Roberts, but I think that's misguided. I was going to rant about that post but decided I couldn't be bothered. I was also going to rant about A call to climate action by that nice Jonathan Overpeck in that rag Science but realised that was misguided: he has nothing new to say, and I have nothing new to say in response.


* Down with pumped hydro storage, Up with dispatchable hydropower! - Brian
* RS elaborates on the idea: THE UPHILL FIGHT FOR DISPOSABLE DISPATCH
* Speaking of which: Stemming the Plastic Tide: 10 Rivers Contribute Most of the Plastic in the Oceans / The Yangtze alone pours up to an estimated 1.5 million metric tons into the Yellow Sea. None of them are in the West, who could possibly have guessed?
* Why is Immigration a "Contentious Issue in Classical Liberalism"? by Bryan Caplan
* 100 years of electricity generation in Great Britain... Just look how rapidly things have changed over the last decade! @Draxnews Electric Insights. https://electricinsights.co.uk
* British coal plants fired up to meet temporary electricity shortfall: Remaining UK coal plants, including Drax, supply 6% of grid’s electricity to cover power supply drop and colder weather - now (2020/11), turning on coal is a notable thing in itself.
Posted by William M. Connolley at 8:03 pm

Nuclear is reasonably constant but...
Sizewell offline since yesterday so down 1 GW
4 offline for over a year

main cause seems to be a carbon problem - graphite cracks . A micro crack in edf terms seems to be 2mm!!

Solar / wind can get up to 30% of total energy provision before it starts impeding grid performance, according to a decade-old study by NREL.

Batteries will be cheap enough long before we get to 30% [s]energy provision[/s] electricity generation.

Will allow much more than 30% and by the time we reach that much higher limit, we will be much more experienced and be in a much better place to be able to work out better how to do the last 10%.

"... a guided tour of the nuclear reactor complex at Torness on the Scottish coast."

It actually seems this can be done right, at least by the British.
Safety and design culture at work.

Why settle for dispatchable hydropower, when projects aimed at harvesting floating Plastic debris from the oceans could herald the dawn of disposable hydropower ?

The mountains of disposable coffee cup styrofoam awash in the oceans could be recycled into light-weight portable dams to create a new generation of portable hydropower whose output could by converted into hydrogen.

The lighter than air gas could be dispatched uphill at zero energy cost to mountain areas suffering from drough, ,and burned to create water to fill empty high-altitude hydropower reservoirs, establishing a new, construction job-rich circular disposable dam economy in accordance with the highest principles of the GND.

Of course this leaves out the power imported from coal burners in The Netherlands.

The imported power included very little French nuclear. Most of it was Dutch coal