Coronavirus days: would most covid-19 victims have died soon, without the virus? 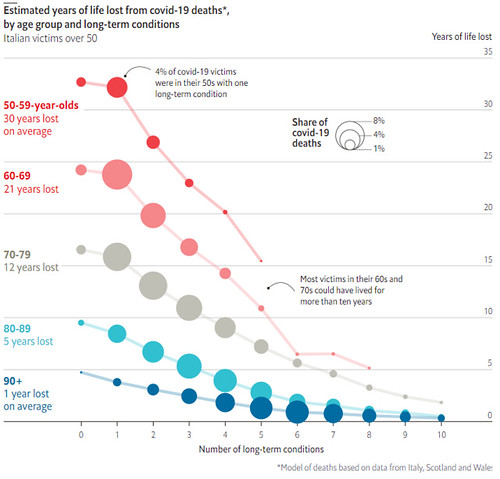 Asks The Economist. And the answer (as always) is no. Somewhat to my surprise and against my prejudices. But matching other studies I think I recall seeing elsewhere. But this one comes with a rather nice pic, which I share with you.

So each decade-group from 60 on up has about the same contribution to total deaths; proportionately more of the 90+ group die of course, but there are fewer of them to start with. And the x-axis is number of long-term conditions, so I think all you really see there is that 60 year olds have 1-2, and every decade adds a couple of conditions, on average. The y-axis being years lost we see that 90 year olds only lose a year or so, but the 60 year olds much more, and the average is about a decade.


Another Economist headline that could perhaps have been answered with no, if it were a question. But it isn't, it's a policy prescription. The suggestion seems to be based on three ideas: that they appear to be less prone to catching and passing on covid-19; that loss of schooling is damaging; and that kids seriously get in the way if you want to work.

Minor disclaimer: I have a daughter in her last year of school. She would have gone on study leave on the 7th of May had this fuss not happened, so school is over for her. The only intervention that could matter is re-instating exams, but I'm fairly sure the govt nailed its colours to the No mast early, so that won't happen; because it would now be unfair to change the system.

I think the kids-don't-get-it-or-spread-it argument is weak, largely from lack of evidence (and slightly less so due to what I feel is implausibility) at this point, so relying on it seems poor. That loss of a term or two's schooling is a disaster is also I think weak; although that may be coming from a nice-middle-class perspective, where if Darling Daughter asks about divisions of particles in the Standard Model, I can at least offer a useful discussion.

I'm rather more sympathetic to the problem of getting people back to work while the kids are under foot. I think I'd solve this regionally: if you look at maps of the disease, some areas - most obviously big cities - are plague pits and much of the rest of the country is mostly free. So, re-open schools in such areas on a trial basis, see how it goes, would be my plan. Possibly do something complicated, if you want to keep the numbers down, like have half the pupils come in on odd/even days.

But I'd definitely re-open garden centers first. And book stores, and cafes; all with some density restriction, if required. And large offices and factories that can meaningfully impose distancing.
Posted by William M. Connolley at 8:24 pm

You might find this interesting on the subject of phased and selective easing of lockdown measures. Apologies if you have already read and discarded

"Keep social distancing, but relax economic prohibitions" sounds right, as do his doubts that the state is able to think like that.

...although The main (economic) problem is social distancing, not lockdowns suggests that won't work. Though I'm not sure that's convincing: it's based on Sweden suffering too, but that could just be because it is part of the global economy. Well, we'll see.