When straining my honey, I observed that the long thin stream of honey falling into the pan doesn't just fall straight down, or flop randomly, no, it arranges itself into tidy spirals. See pix: 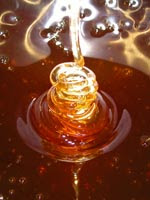 Isn't that pretty? It looks like glass. Its not a steady state: the tower builds up, then the weight gets too much for it, and it semi-collapses down, then builds again. The tower is about 1 inch high (metric? pah!), the fall of the whole stream from the strainer about 1-2 feet, and the build-shrink cycle about 1-3 seconds, though it changes as the honey stream slowly thins out. Its not caused by motion at the top of the stream, which is steady, as is the whole stream until just above where it curves off.
Posted by William M. Connolley at 8:47 pm

I've watched this kind of thing a lot over the years (as you'll know, honey flows silently and it's valuable, you just daren't leave it fill, so you watch it). I've often wondered if I'm alone in finding it rather fascinating.

Honey flowing out of a big tank into a bucket behaves differently. (Bit esoteric all this) The column of honey is wider and you don't get spirals. Rather (difficult to desribe this) on contact it 'flips' back and forward and from side to side (as the bucket fills the speed of flip slows). What's perhaps more interesing is the way bubbles get incorporated and then rise up throught the bucket being filled making precise patterns the bubbles bursting gently in another precise sequence.

Have you noticed the irridecence (or perhaps interference, or play of light) you see in freshly bucketed honey - bit like you see with 'cat eye' or 'labradorite' minerals?

I've seen the flip-flops you describe when the column is wide flowing over a lip. I hadn't spotted the bubble behaviour or the irridescence effect - I'll have to watch more carefully next time. Perhaps it depends on the type of honey.

Had you been Richard Feynmann you'd have developed a theory for how these shapes are created and used it to explain high temperature superconductivity or something :-)

Hmmm, yes, I also have an extensive archive of photos of water ripples over sand on the beach, but that hasn't lead anywhere either, although that could just be relevant to atmospheric dynamics.

Feynmann should have kept bees, it would have fitted his eccentric image (beekepping eccentric? What am I saying...). Now where is that photo of Snelgrove wearing a beard of bees?