It is the end of an era. Miriam's career with ATML/Virata/GlobespanVirata/Conexant is now over. But (and I) you need shed no tears for her: she gets to doss around all summer playing the piano before working with a new startup in the Autumn and beginning the process all over again.

There is no science in this post, of course.

The cartoon sums it all up: those heady dot-com days when we were all going to become rich with stock options (we didn't go in for any of the day trading stuff). Miriam kept it pinned above her desk as a reminder.

The company started as a Herman Hauser startup in about 1993. M joined in 1995 I think; in those days it was ATML. It was going to get rich in the 'ATM to the desktop ' revolution with ATM switches and network cards to replace Ethernet ones... Miriam started off in "diskbricks" which was some kind of raid-y thing for video serving. The ATM revolution never got off the ground, but fortunately DSL came along, and the company, renamed 'Virata' by then (after some long-forgotten piece of company product... it was the only suitable anme they owned the namespace for), was perfectly poised for it. DSL is based on ATM technology, and Virata made sale after sale after sale (Miriam helped with that bit...).

Then came the glorious days of the internet boom and the IPO when vast paper fortunes were made, and they moved to glorious custom-built offices in the science park (rather inconvenient that, it increased Miriams cycle ride from 20 mins to 35) with a glorious boardroom table in the shape of a curvy V and a round table for the dot on the logo. I shall draw a discrete veil over the crash times. All this was under the management of Charles Cotton, who seemed to be good. But! Then came the disastrous (and in retrospect, rather hard to explain) decision to "merge" with Globespan to form Globespan Virata, when CC left, and times got leaner, in a sense (in a sense, because there was still a huge cushion of IPO money; but the stock options became... uninteresting). And then a bit later the seal was set with the takeover by Conexant.

During all this process the company grew, and left the original Cambridge site far behind. Around IPO time (before?) it got a US presence that came to dominate the company, probably a loss, the culture starting shifting. All the mergers and aquisitions left the company with overlapping bits that no-one was brave or strong enough to kill. Various foreign things got bought (an Israeli company with a name designed to make it seem non-Israeli...) and then other bits got disposed of in the last 2-ish years of the "downsizing" phase when the management-speakers got the upper hand. The upper levels started saying things like "Our revenue is X. So our accountants say we should be employing Y people. So Z people are to become redundant" apparently without realising that if you lose (useful) people the productivity and income go down, so you then go through another round of "Our revenue is now X*0.8. So..." and round again. So in the end it turned into waiting your turn to get downsized... Miriam made it to the end, but it was depressing and she is happy to be out.

An amusing feature of the successive names was the game of spot-the-old logo in various places: the sign outside the building changed; but the V boardtable was never replaced and various layers of old names existed.

But even in death (at the farewell barbeque) the aura of money hadn't quite faded: comparing it to an equivalent type event at BAS (well, OK, we're not closing: but it was just the annual barbeque really) the amount of free stuff floating around was just... well.

If any of this sounds like mourning for the death of a dream, it isn't. Their products are basic stuff buried in modems (our most exciting moment came when a friend phoned up to say "we've just got a new modem and when it boots up it says Virata on it!" with chip names like Helium, Hydrogen, Claudius... but those may be the internal names anyway. It was probably useful stuff, but anything of any value still exists elsewhere. What was distressing though was how an enthusiastic creative bunch of people got managed into a pile of junk. So it goes.

And the obituary... here is the logo from the farewell tee-shirt :-)

Miriam says (I find this a bit surprising from the outside, but maybe I got to hear more of the bad stuff) that Virata is considered a Cambridge success story, with positive effects on their re-employment.

At one point this post was going to compare the inefficiency of Communism (no-one does anything) with Capitalism (everyone works to cross purposes and there is gross wasteful duplication, like 100 ants carrying a leaf pulling in all directions). But I can't be bothered to do that properly... 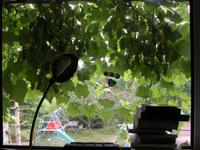 Meanwhile... back in the real world: do you think I should cut back our grape vine? This is the "view" from our bedroom window.
Posted by William M. Connolley at 3:52 pm

Maybe just train up the trailing ends? It does seem to be blocking a lot of light. (Honesty compels me to admit that I have a brown thumb rivaled by few.)

On the capitalism v. communism issue, I'm reminded of this old Soviet workers' joke: "Under capitalism there is the exploitation of man by man. Under communism we have exactly the opposite."

I'm with Steve - perhaps a gentle trim, keeping some sort of modest curtain of green. It's a nice look.
- John Fleck

It will probably need a trim, before the weight of vines pulls down the guttering its attached to... but yes, its nice to look out through the curtain at the moon.

At least *my* vegetation picture doesn't have my head in it :-)))

Ah yes, those were the days of jokes: "we pretend to work and they pretend to pay us" was another I liked. Still there is a serious point in there which someone probably studies: the great inefficiencies in the various systems.