What Do Donors Want? Heterogeneity by Party and Policy Domain 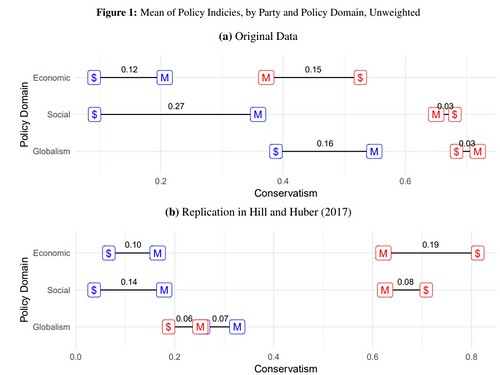 Via TF; see-also Twatter. It is fashionable, especially amongst the Left, to decry the influence of money in politics. This note, by David E. Broockman and Neil A. Malhotra, looks at how donors and public differ, by party. It considers them as blocs, so takes no account of how one may have influenced the other and come to alignment over time. The abstract:


Influential theories indicate concern that campaign donors exert outsized political influence. However, little data documents what donors actually want from government; and existing research largely neglects donors' views on individual issues. We argue there should be significant heterogeneity by party and policy domain in how donors' views diverge from citizens. We support this argument with the largest survey of U.S. partisan donors to date, including an oversample of the largest donors. We find that Republican donors are much more conservative than Republican citizens on economic issues, whereas their views are similar on social issues. By contrast, Democratic donors are much more liberal than Democratic citizens on social issues, whereas their views are more similar on economic issues. Both parties' donors are more pro-globalism than their citizen counterparts. We replicate these patterns in an independent dataset. These patterns can help inform significant debates about representation, inequality, and populism in American politics.

For the figure, you need to know The economic and social issues are coded to lie between 0 (most liberal) and 1 (most conservative). The globalism items are coded to lie between 0 (most pro-globalism) to 1 (most anti-globalism). Oh course, this is all written in USAnian, so when they say "liberal" on economic policy they don't mean liberal at all; they mean state-interentionist.

I wanted to trust their questions on the three issues, so I wouldn't have to bother read them, but grew suspicious and did. On social issues, their questions make sense (though they class The government should make sure that every American has health care coverage, even if it means raising taxes to pay for it as economic rather than social). Globalism is in some respects iffy (We should protect American jobs even if it means reducing the standard of living of people living overseas - this is protectionism, which is bad, including for Americans, so this question is hard to answer if you're economically sane). The Hill and Huber ones are worse: for globalism, only one question is about tariffs, and the other four are about sending troops abroad. This explains the massive differences between the two sets of results. Having said that... let's ignore all the caveats and just look at the graphs.

The Repubs are closely aligned with their electorate, except on globalisation; the Dems aren't very aligned - consistently further out - but are closest on economic.


* What Tech Leaders Really Want - same authors, on Youtube. Irritating, as talking heads on Youtube usually are.
* A Swedish Perspective on COVID19.
* I CAN TOLERATE ANYTHING EXCEPT THE OUTGROUP - SSC.
Posted by William M. Connolley at 8:39 am