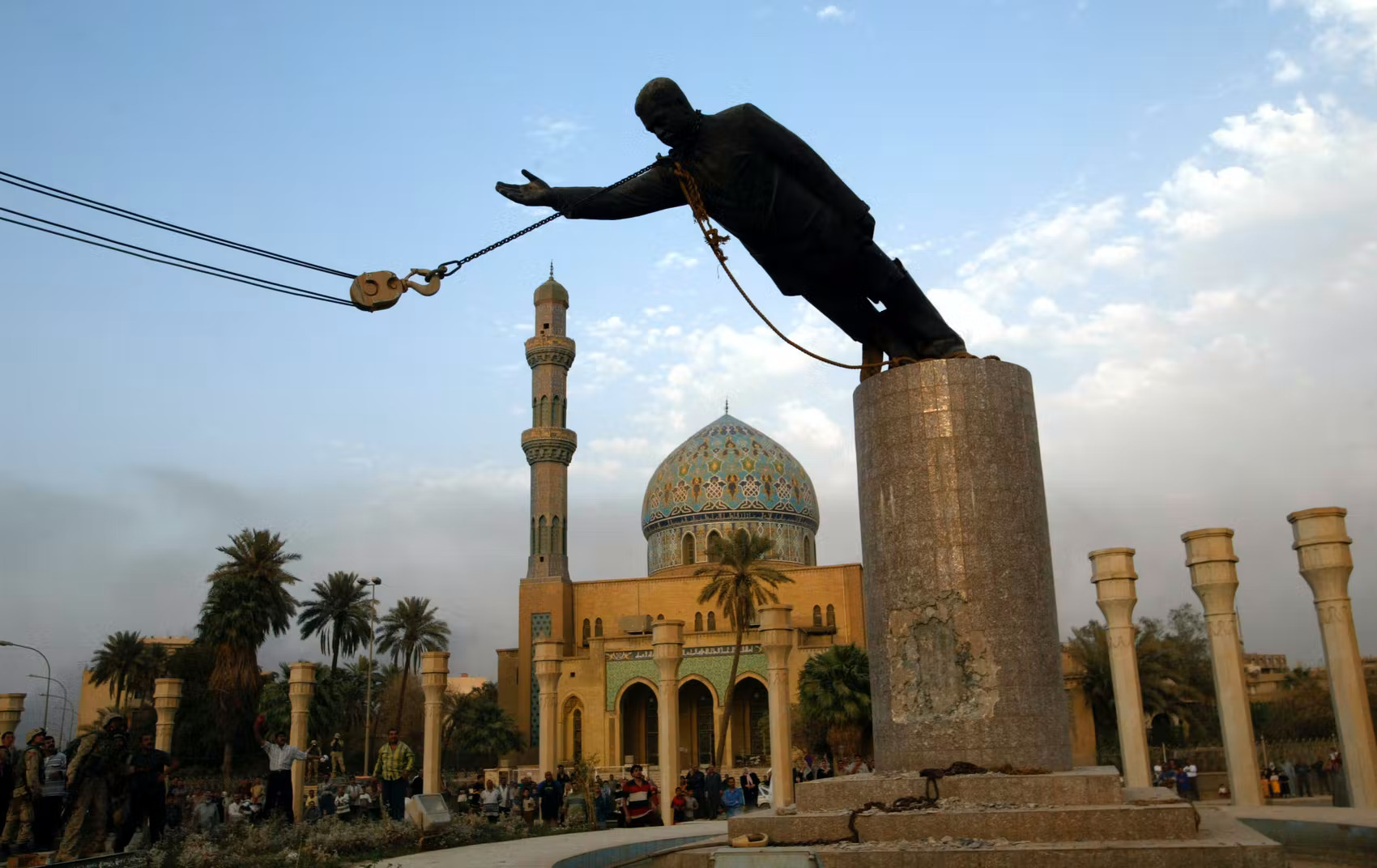 In Ukraine: Work as if you live in the early days of a better nation I said Lenin statues toppled in protest [in Ukraine] Aunty continues, which has ominous echoes of the disaster area that we made of Iraq; not that the statue-toppling was the problem itself; indeed the people’s joy is clear. And of course the famous destruction of Saddam's statue is famous, and I approved of it. Alas all did not end as happily as one might have hoped. And yet I don't approve of the toppling of Edward Colston in Bristol.

How can I possibly justify a different response in these different situations? After all, they are in all cases statues that people don't like - what other possible differences could there be?


This isn't really my determining factor - I think, I might change my mind later, recall that I'm writing this post to try to understand my underlying principles - but I think weight of opinion matters. In the cases of Iraq and Ukraine (and all over the former Soviet Union, anyone who had had to live under Communism) pretty well everyone hated the regime and wanted the statues down3. So there was none of this "we tried doing it democratically and it didn't work"; in fact they hadn't tried at all, because of course trying would have been death, earlier; but the formal-democratic route wasn't needed, because the actual-democratic - participatory, not representative - gave a clear mandate.

And yet, recall Socrates and the Athenian Admirals.


Also known as "standing": do you have an actual concrete injury that needs addressing? In the case of Iraq or Ukraine, yes: these people had lived under an oppressive regime. By contrast, the problems of the poor folk of Bristol are all rather feeble first-world-problem snowflakery: "I felt a bit sad"5. This is closely related to, but not quite the same thing as, my first version, which was length-of-time: the grievances in Iraq and Ukraine were present-day, or at least only-yesterday, and fresh. Those in Bristol were stale, and needed to be dragged to people's attention for anyone to care.


I've seen and heard - within my own household, forsooth2 - the argument "Why was that statue removed in the way that it was removed? Because for 20 years, protesters and campaigners had used every democratic lever at their disposal, petitions, meetings, protests, trying to get elected politicians to act, and they couldn’t reach a consensus and they couldn’t get anything done" (that example is Lisa Nandy) and although she, being a pol, is too measly-mouthed to complete the thought, the implication is "and so they were justified in taking the law into their own hands".

But no, that's not how it works. There's no rule that says "if you really really want something but you can't get it, then after a while you just take it". And yet that, effectively, if what is being said. Obviously, this only applies to things that Nice People approve of. If you really really want the Sudentenland, that doesn't mean you can have it. Everyone knows that1.

Indeed, if you've tried really hard for ages and failed, perhaps you should stop and think why you've failed. Perhaps it wasn't such a brilliant idea after all. Perhaps the people that disagree with you are right.

Another argument is that the mob rarely stops at a sensible place; indeed, you don't really expect sense from a mob, if you think about it. Consider4 After Colston, figures such as Drake and Peel could be next from the Graun, containing A founder of Guy’s hospital in south London, he made his fortune through owning a large number of shares in the South Sea Company, whose main purpose was to sell slaves to the Spanish colonies. But Wiki tells us By the late 1670s, Guy had begun purchasing seamen's pay-tickets at a large discount, as well as making large loans to landowners. In 1711, these tickets, part of the short-term 'floating' national debt, were converted into shares of the South Sea Company in a debt-for-equity swap. The South Sea Company was a government-debt holding company, and while there was a brief attempt to sell slaves in Spanish America, this was completely unprofitable in Guy's lifetime.[3] Therefore, while he is sometimes erroneously portrayed as having profited from slavery,[4] this is incorrect. In 1720, the year when the South Sea Bubble burst, he sold 54,040 stock for £234,428, making a profit of about £175,000.[5] He then re-invested this money in £179,566 4% government annuities, £8,000 of 5% government annuities, and £1,500 East India Company shares.[6]. Looking at the talk page is also enlightening.

Those who know me will find me a somewhat curious defender of the Rule of Law. But this isn't the post to explore that.


Those who feel an actual personal grievance I have some sympathy for, though I think they're largely misguided. As the wise but slightly damp Mr Smith once opined, people are generally prepared to grin and bear up under oppression, achieving a level of happiness; whereas a grievance that might be redressed can lead to great unhappiness. There are many mottoes in those thoughts (which alas I can't find the exact page reference for). The poor man's son, whom heaven in its anger has visited with ambition also bears reading, as do Hobbes's thoughts on Felicity. Consider then professional agitators, aka pols; their task is to stir up the populace, nominally to the said public's gain but often with more direct motives; such people do not want a happy populace.


* Locals prevent removal of Baden-Powell statue from Poole Quay - sort of reverse mob justice. Which, I'm obliged to admit, I kinda approve of.
* African-American lives matter by Scott Sumner
* In defence of liberalism: resisting a new era of intolerance; Our public figures must rediscover the true spirit of liberty - Spectator
* The American Press Is Destroying Itself; A flurry of newsroom revolts has transformed the American press by Matt Taibbi.
* Buddhas of Bamyan.

3. And of course they keep some of them in parks where they can be regarded, but in a safe way; e.g. Hungary's Memento Park, or Russia's Fallen Monument Park.

5. That is, their grievance from the statuary. Britain - sez oi from my position of privilege - isn't particularly racist, but there are genuine grievances, like the over-representation of blacks in the stop-n-search figures. But this post isn't intended to be an examination of racism in the UK today. There's also some question as to whether pratting around with statues isn't a distraction from actually fixing real problems.
Posted by William M. Connolley at 3:23 pm

Columbus has already been beheaded and toppled in the US, and some are setting their sights on the Washington and Jefferson monuments.

Now Columbus was indeed a nasty fellow, but at some point we all need to contemplate the fact that we are all descended from thieves, murderers, rapists and the like, and destroying history is only another way to ensure that we repeat it.

But I won't weep for Colston. I imagine his statue can be fished from the river in better shape than the 19,000 plus Africans who died in Colston's slave ships on the way to the Caribbean.

All heroes have feet of clay.

Given a little research I could find a reason to remove every statue in the world.

Perhaps the entire concept of statues has become obsolete, and they should be replaced with sculptures.

On the specific matter of the Cecil Rhodes statue, I hear that the most vociferous campaigner against the Rhodes statue is a Rhodes scholar. Perhaps we should remove the statue and the scolarships.

We look to monuments to tell us what past civilizations and cultures thought were worthy of honor and respect. Few statues struck in the past 300 years are worth preserving on artistic grounds--they are there to show us what was important back then.

Perhaps they don't need to be destroyed. A museum of infamy might be appropriate.

We don't put up many statues nowadays.

What will the future see as our monuments? Most of what we create is digital and transient.

My personal rule of thumb - is the person honored by the statue honored _for_ their sin, or despite it? As a USAnian, I'm mostly familiar with our statues, so I'll do a quick run-down of "most justified to topple" to "least justified":

*memorials to Confederate Generals: it is ridiculous that our country is littered with statues to the _losers_ of a civil war. There are way more statues of Robert E. Lee than Ulysses Grant. Moreover, these statues were constructed by racists specifically to protest civil rights. Justification for toppling: 10/10.

*statues to Christopher Columbus: these statues were raised because of his expedition to across the Atlantic. His enslavement and killing of Caribbean natives was despicable and tied to his expeditions... However, had Columbus been a pacifist, his statues would likely have been erected anyway. Justification: 5/10

*statues to Jefferson, Washington, etc.: these statues were raised because these were the leaders of the Revolution and drafters of the Constitution. Yes, they were slave owners, and were part of the negotiations that led to slavery being written into the Constitution. But that's not what the statues were raised for, and they are fundamental to the history of the US. Justification: 1/10. (but totally in favor of adding plaques and other historical context about their flaws)

Ah, Matt Taibbi, the writer who opined that the Comey's investigation was equivalent to the Bush administration's lying about WMDs. Who took Barr's summary at face value. Maybe, just maybe, not the best judgement in that man. The journalist who makes a career claiming that journalists have killed journalism.