Coronavirus days: the only way is up 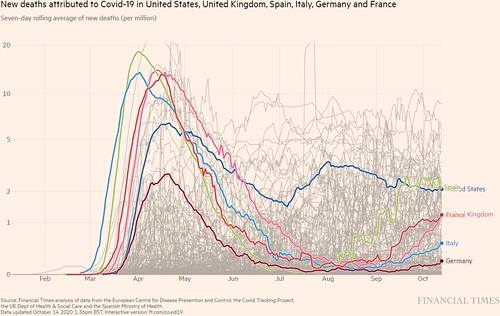 Not so long ago, when I last wrote - the first of October - the Beeb was reporting "Covid-19: Growth in cases may be slowing in England". That was stupid, even at the time4, and has not aged well. Now a more typical headline is Coronavirus: Northern Ireland set to announce partial lockdown: Stormont thrashes out plan including closure of businesses and schools, as well as new limits on gatherings. Our own idiot populace bears much responsibility for this, with stuff like Liverpool mayor Joe Anderson says partying crowds have 'shamed' the city being all too common1. And lest we somehow think our glorious British govt uniquely incompetent2, I include this nice pic from the FT, showing the Spanish doing about twice as badly as us right now, and the French roughly as rubbish as us. And even the nice Krauts are suffering something of an uptick, though doubtless they will crush it. 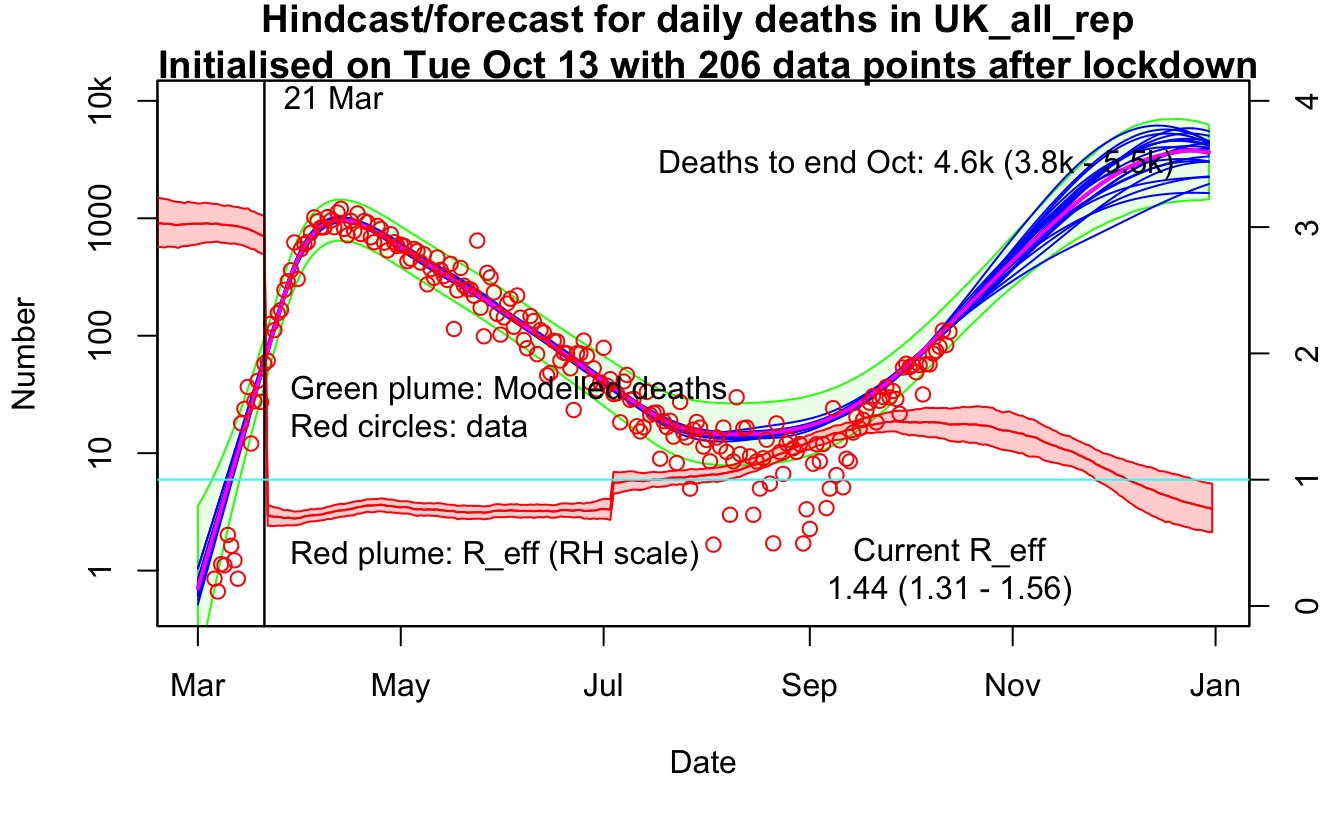 But now let us turn our thoughts towards the future, helpfully projected - note, projected, not predicted - by JA. We see a peak of perhaps 5k stiffs/day5, about 5x the initial peak, and surely that would not be tolerable; our medical services would be overwhelmed, not to mention the sadness of so many premature deaths.

But we have left it rather late to turn the ship around. As JA thoughtfully notes today, we have "baked in" a significant increase already, and unless the govt does something soon other than rename things, we'll soon be baking even more.

In retrospect, the relaxation in July instead of continuing to drive the numbers down, looks to be an error. But I'm pretty sure the natives were getting restless at that point - see comment above about our poor-quality population - and the relaxation was definitely popular. So overall I'd say we're getting the epidemic we deserve, and I feel somewhat pessimistic about the future3.

Leaving aside the prospects of a higher quality citizenry, the other obvious failing is anything vaguely competent in the nature of test, or trace. The latter I think I have something of a hard time believing in, but the test element could be done so much better, and should be. It also looks like I am to some extent getting what I wished for in "Regionalism", but in the confused atmosphere of a state occupied by morons, I see how hard this concept is to explain. Can we perhaps be more Swedish? I wanted to say something sympathetic about The Great Barrington Declaration, too. So I have.

People - including Labour - have called for a "circuit-breaker" of a couple of weeks. I think this is an example of people giving a name to an idea, and then taking the name for the thing, an imagining that because the thing has a given name, it will work as the name implies. But reality isn't like that.

Cruel though it is to say it from my comfortable position, I don't think the impact on GDP is as large or as important as it looks. To an extent, we're losing "fluff". Of course I regret losing my weekly coffee-in-Waterstone's, and this loss reduces GDP, and someone is no longer being paid to serve it to me; but this loss in the service economy isn't as serious as losing food production or imports; and so on. It also implies, to my mind, in a rather half-formed thought, that the country can "afford" to continue paying wages for those so laid off; though in this experiment, to maintain balance, the money would have to come from the likes of me, which is to say higher taxes.

1. Good liberal commentators like the Graun struggle personfully to blame it all on the Govt, or Boris; but this is a pathetic abdication of responsibility: people are responsible for themselves, if they are adults.
2. That nice SR seems rather prone to this particular error.
3. I say that from the comfort of my home, and my desk job that has if anything got more comfortable in lock-down. I miss my Saturday coffee-n-book in Waterstone's, and of course the bumps were cancelled, but that's about as bad as it gets for me personally.
4. It now appears that while this drivel was appearing in public, behind the scenes by Sept 21st SAGE was arguing Cases are increasing across the country in all age groups... the doubling time might be as low as 7-8 days... not acting now to reduce cases will result in a very large epidemic with catastrophic consequences... If schools are to remain open, then a wide range of other measures will be required... [including] A circuit-breaker (short period of lockdown) to return incidence to low levels and so on. It is now 3+ weeks later with only the token changes.
5. Somewhere on Twatter I think he qualified that somewhat; with different parameters you could plausibly halve the peak perhaps; but even 2.5 k would be a lot.

People are responsible for the government that was elected.

Elect a clown, expect a circus.

From this side of the pond, the arguments in favor of a 'circuit breaker' are to lower totals to the point that test, track and trace become feasible. Not to alter the course or rate of infections. Just keeping the bulls in the chute until the clowns and riders are ready for them.

> People are responsible for...

I agree; though there is some circularity (how to get a better populace? Better education! How to get better Ed? Elect people who will...) and it is hard to see how to break out of it.

A two week "circuit breaker" will not lower totals - see the past record. At best it will slow the rise.

I feel dubious about this, at least in the UK. Our track-n-trace appears rather useless, perhaps because the populace revolts against the idea; and the numbers are probably to high for realistic trace.

Yes, I agree that TT&T has perhaps not been thought through with any rigor. I would not want to be on the phone with one of my fellow Yanks who happened to be a militia member, asking who he had been in the room with for the past X number of days...