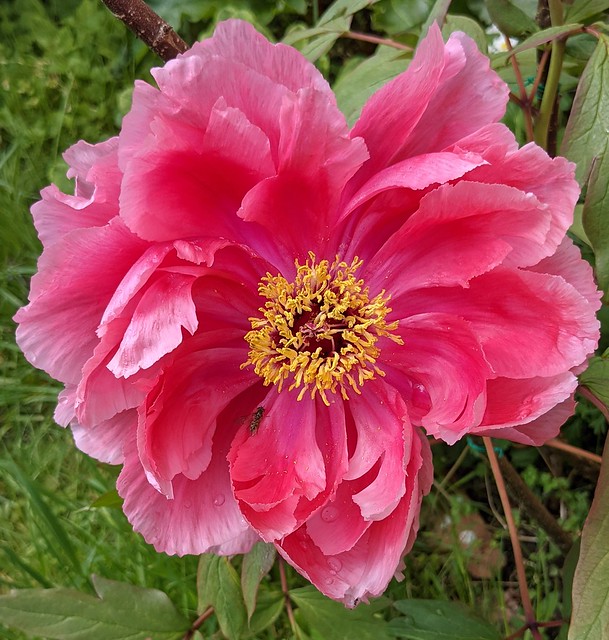 It am de Graun, channelling The Plastic Waste Makers index. This is eerily familiar and reeks of Retread: Just 90 companies caused two-thirds of man-made global warming emissions? The Graun, as you'd expect, is a bit confused, quothing Twenty companies are responsible for producing more than half of all the single-use plastic waste in the world, fuelling the climate crisis and... But of course turning oil into plastics doesn't much affect the climate; carbon is emitted during this as during any industrial operation, but unless you burn the plastics, most of the carbon is locked away. Indeed, by being a use for oil, and thus raising its price, and thereby increasing the price of petrol, it arguably reduces carbon emissions. Until you burn the waste; but those twenty companies are, of course, not burning it.

As you'd hope, they've managed to get Exxon to the top of their list of Evil Plastics Companies, which sort of surprised me, cos I don't associate Exxon with making plastics. And they don't; because what the report is actually about is subtly different: the companies that produce from fossil fuels the five primary polymers (my bold). So, it is the feedstocks. I think that leaves me with the same opinion as for Evil Fossil Fuels: the people that burn them are responsible for burning them. Or, if you're worried about plastics pollution of the world, the people that throw it away are responsible for doing so.

Speaking of which, the Graun quotes “Plastic pollution is one of the greatest and most critical threats facing our planet,” said Dr Andrew Forrest AO, chairman of the Minderoo Foundation. Which is pretty funky; it is hard to see plastic as that, unless you're job is to be obsessed with plastic. I seem to have said this before... which link will also point you at nice pix telling you who the naughty people throwing plastic into the ocean are. Hint: it isn't the Cold West.

* ExxonMobil found the real reason for the climate crisis: You - Salon mindlessly parrots Supran and Oreskes latest drivel, which is really just the same old drivel.

* One of the great scientific truths of the “invisible hand” is that the participants do not have to grasp (in fact cannot grasp) the overall operation of the system but are guided only by their own private interests in particular contexts. But it may very well be the case that while we don’t have to understand the spontaneous order of the free-market economy in order to benefit from it, a significant portion of the general public might need to grasp the basic scientific principles and the aesthetic beauty of the “invisible hand” in order for it to be sustained in the face of ordinary political pressures for expediency - from Fearing Freedom: The Intellectual and Spiritual Challenge to Liberalism by Pete Boettke; h/t CH.

* The long walk to learning; Asfaw Yemiru died on May 8th; The founder of Ethiopia’s best school for poor children was 78 or 79

* A lesson for a food writer and for all of us. The Secret Recipe for Civilization by Tim Worstall.

Your link to "I seem to have said this before" goes to a page that apparantly doesn't exist. I assume you weren't being cryptic?

Damn. I hate it when I copy the title instead of the URL... thanks, fixed.

It's bizarre you would think Andrew Forrest is obsessed with plastic...

He's an iron-ore miner, principally and then agriculturist.

"Or, if you're worried about plastics pollution of the world, the people that throw it away are responsible for doing so."

Or, if you're worried about sewerage pollution of the world, the people that throw it away are responsible for doing so. Ego, we don't need sewers and sewerage treatment and, um, to recycle it?

But people *are* responsible for their own sewage. It is why I and you pay taxes for sewage plants. It is the people that buy, eat and excrete the food that pay for dealing with the sewage - anyone suggesting that supermarkets or farmers should pay because they supplied the food would be regarded as idiots. We should look the same way at those who supply, vs those who burn, fossil fuels.

Yes, the truth is we, in places where this is done, do pay. But, doesn't industry have to dispose of it's sewerage too? It does. If it 'disguises' it's waste as packaging I think they're getting away from *some* responsibility.

Besides, if we use your argument, then reducing pollution from cars is car owners responsibility. Is it? Not entirely, surely?

Add in reference to industry using 'SEP fields' (aka buck passing) and you have your reply.

That's not a reasonable comparison. We have no choice but to eat food... We certainly have a choice to use degradable substances rather than plastics that don't degrade. Wouldn't be a problem if they broke down.

Comparison: I don't think anyone is saying that food and plastics are comparable. The connection is at a more abstract level: things you own.

I should probably reference the latest drivel doing the rounds, of which an example is Salon's ExxonMobil found the real reason for the climate crisis: You, the latest in a long line of people selling the snake oil that it really isn't your fault, you're a nice person no matter what, the problem is those other people and the Evil Oil Companies. The idiots behind this are Supran and Oreskes, no surprise there.

Unfairly Excluded middle. Not one or the other, but both.

Are you to blame? Yes, to some degree.

Is ExxonMobil to blame? Yes, to some degree.

What you can buy isn't your choice completely, of course. And sometimes, not at all. Companies have power, and use it.

Hummm, therefore it's not the number of guns in the USA that's the problem there, its that people use them? And, it's just tough on anyone who gets caught in the crossfire (just as it's just tough if those who don't pollute the air suffer because others do)?

Christ, tell me you're not going all NRA!

"The point you're missing is the obvious one: if you (own) something, you're responsible for it."

> its that people use them

It is certainly the case that the people that kill others with guns are responsible for those murders. Are you trying to argue otherwise?

> I am not choosing to buy the plastic packages

Nonetheless, you are buying the plastic packaging, and therefore you are responsible for disposing of it. Are you trying to argue that if you were to throw it into the street, or into the ocean, you would not be responsible for the resulting pollution?

"Nonetheless, you are buying the plastic packaging, and therefore you are responsible for disposing of it. Are you trying to argue that if you were to throw it into the street, or into the ocean, you would not be responsible for the resulting pollution?"


So, I don't want something, it gets foisted on me, to profit the manufacturer of that product and I am now responsible for it... What a crap system. And it's this system that people are complaining about - the point you are missing because of you idealistic views.

It's simply an external cost that needs to be internalized. Both the manufacturer of the plastic, and the company selling the product wrapped in plastic need to have that cost imposed on them. The plastic is not for me...

Or are you now against carbon taxes?


What you can buy isn't your choice completely, of course. And sometimes, not at all. Companies have power, and use it.

Once they do so, they have no responsibility.

Responsibility is for little people.

It is certainly the case that the people that kill others with guns are responsible for those murders. Are you trying to argue otherwise?

Of course I'm not.

Shorter version, do you absolve gun manufactures (or govt?) of any responsibility for the number of gun related death in the US?

Gun violence in the USA is a problem of poverty, lack of opportunity, systemic racism, not simply violence. Not simply guns. Almost 2/3 of the gun deaths are suicides. I had a friend shoot himself in the head because he found out he had cancer and was barely keeping afloat as it was. Cancer would have completely impoverished him.

There's no real analogy with gunz vs plastic; your "therefore it's not the number of guns" doesn't really make sense, in implying a connection. The people in the US killed by gunz are killed by gunz, and therefore the "problem" is the gunz; and each individual gun is the responsibility of the person that bought it.

Suicides: I wrote a bit about single-death vs multiple at Gunz: constitutionalism and majoritarianism.

Has the United States had one day this year without a mass shooting?

Yes, see https://www.gunviolencearchive.org/reports/mass-shooting. May 19th, May 17th... and that's even using their somewhat broad defn of including events where no-one died.

"What did the judge conclude?
The judge has proved us right on many points! In short: the court orders Shell to reduce its CO 2 emissions by 45% net by 2030 (compared to 2019). Shell must also endeavor to reduce the CO 2 emissions of suppliers and customers by 45% net (2030). And Shell must do that through corporate policy. For this, Shell must write new policy.

The judge also established that companies are responsible for protecting human rights throughout the chain by limiting CO 2 emissions, including those of business relations and customers."
Everyone seems to conclude that an appeal is pretty much certain.

I guess that's spam, but vaguely interesting spam. From the Graun: Court orders Royal Dutch Shell to cut carbon emissions by 45% by 2030. I think it is dumb, as I've said before, and (effectively) filled with lies. Micro-management by judges is no way to run an economy.