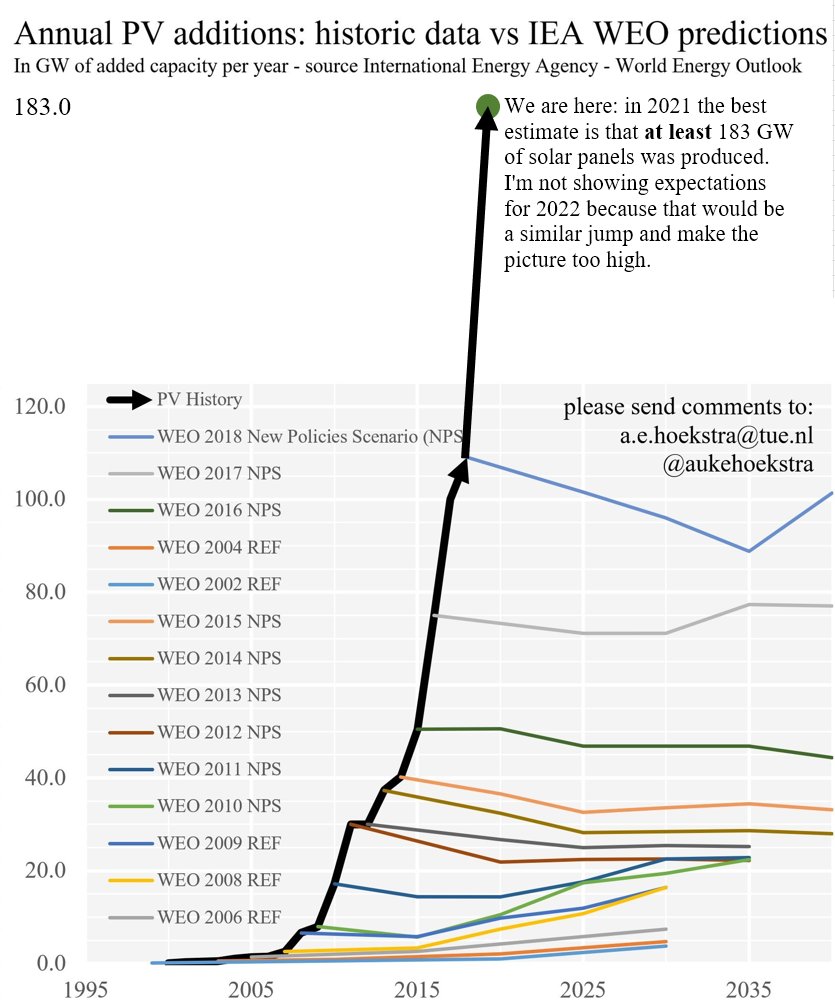 The top figure shows it’s a 10% increment on current spending in these sectors over 30 years, which doesn’t seem unreasonable. If it was 100% more that would be out of reach; if it was only 1% nobody would be arguing about it. So reasonable and perhaps unsurprising at the order of magnitude involved.

Whatever happened to the goal being 'under 2C, hopefully 1.5C?' I mean, if you're going to have a political goal rather than a scientific one, why not allow a margin?

But I'm not sure how that is compatiable with "a 60% increase on current investment levels" which is rather closer to your "out of reach" 100%.

I've somewhat lost track of that. I'm not sure how important it is.

So the bottom line is that we can't afford enough mitigation to keep us below 2C and we're stuffed.

"Other sectors could see overall cost decreases. Our analysis suggests that the total cost of ownership for electric cars could be cheaper than for ICE vehicles in most regions by 2025, and even sooner in some regions."

To which I'd add, replace your gas cooking stove with an induction one. Cleaner, better for your health, nicer to cook on.

Well, it is more a matter or preferences, than a hard "afford" limit.

It would be odd if there weren't some.

" Here we expand this to include additional spending categories such as assets that use energy (for example, the full cost of passenger cars and heat pumps), capital expenditures in agriculture and forestry, and some continued spend in high-emissions physical assets like fossil fuel–based vehicles and power assets. As a result, our estimates exceed to a meaningful degree the $3 trillion to $4.5 trillion of annual spending for the net-zero transition that others have estimated."

So doesn't this make the whole exercise a bit meaningless? I mean if I spend $40,000 on a car, but now it's electric, that doesn't really change what I'm spending or mean that society is somehow wasting money. And that money that needs to be spent will be creating new jobs; infrastructure or more efficient goods etc. So this seems like it is more changing the direction of the economy, not taxing and burning money. Why is this not just filed under "much ado about nothing"?

I do not pretend to have understood all their methodology but... I think they're trying to measure the total spend, not just the additional spend on top of what we would do anyway. If their numbers were purely additional, that would be depressing, since they would then be so large. I think they / you compute the additional spend by subtracting from their number the would-have-spent-anyway number. In which case, they have to include costs of e.g. new cars, even if they are electric replacing petrol.

I feel uneasy with all these numbers, though, because they just treat resources as money. I'm not sure they consider, e.g., capacity to produce solar PV. Although to some extent, and given time, spending money will conjure resources, because people will flock to it.

Dude, time for a new post, don't you think?

I was thinking that, indeed. I wouldn't want to go an entire month with no post, my public might forget me. I did start a post entitled "Johan Rockström is a tosser" based on Of all tasks, the phasing out of #FossilFuels is the easy one but then I thought nah, he's not worth it. And I did finish Switzerland 2021 if you like mountains.

I'm not a fan of Rockstrom, but my wife, strangely enough, is. She has been watching a set of videos on climate change (trying to better understand both it and my interest in it) and she really likes what he has to say.

The Ted Talks are Countdown, or Climate Countdown, something like that. I watched a couple with her--some of them aren't bad, actually. But planetary boundaries, or climate wedgies, or whatever the Potsdam Institute is peddling this year, leave me quite cold.