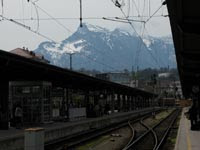 Yesterday I arrived (train from Salzburg, nice mountains there), registered (vast Q, 1:30 hours because I forgot to pre-register; why the Q was quite *so* slow is a bit of a mystery though), found my Hotel (nice, just off Stephansplatz). 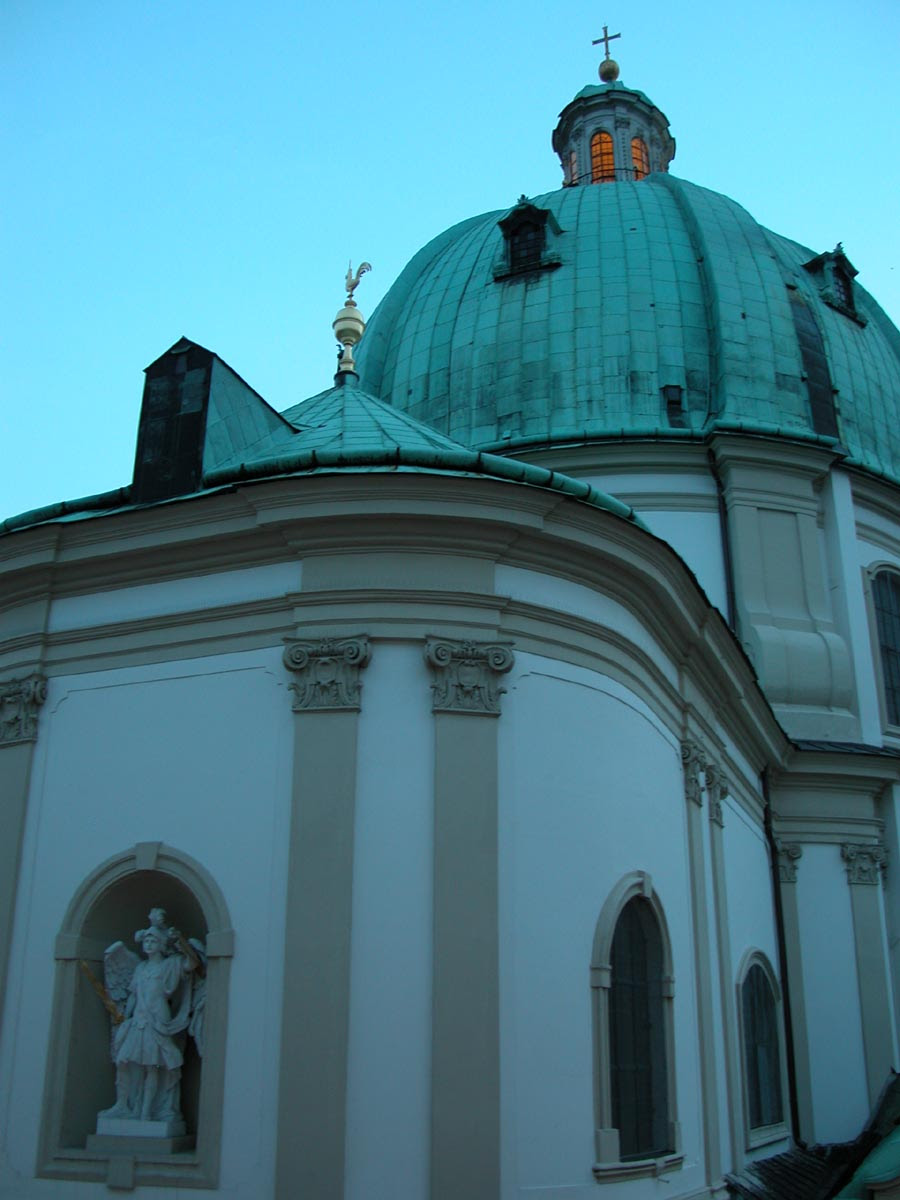 Today: talking to B on the way in about Why Vienna, since although its a nice city its rather less convenient than Nice. The answer is that Nice (acropolis) was, err, abusing its commanding position to lean on EGU; so we had to show independence. And EGU has grown from 2k to 8k over the past 10 years so other venues, eg Grenoble, no longer work.

First, to the Cryosphere for Hans Oerlemans work on temperature reconstructions from glacier lengths back to 1700. This was RC'd a little while ago. The talk pulled out some stuff that wasn't in the RC post, and perhaps not in the Science paper: that the changes are quite synchronous globally (the available glaciers are widely but sparsely distributed: but if you remove the alps, where most are, the picture doesn't change much). And that this isn't the sort of thing that the glacios are used to doing. And that most of Oerlemans records stop in mid-1980's and he would like to get them up to date.

Then solar stuff: a bit outside my field. Usoskin (...and Solanki) on T-solar corrs back to 200 AD, using CR (cosmic rays) and SN (sunspot #) reconstructed from isotopes. Some split into, I think, short-term var (ie 50-y odd) and long term trends. CR fits better than SN. No good corrs for short-term; better for trends. Which brings up the question, why doesn't it corr to the short term? Do they expect a very delayed response? Which brings up the next talk...

Gleisner/Thejll: looking at solar/t corrs in the reanalyses. Oddly, ERA and NCEP are quite different: good corrs in NCEP, poor/none in ERA. I would have said ERA was better, but then I'm european. He does some multi-var regression to extract solar/enso/volcanic signals, leaving residuals. In ERA, the residuals look like noise: in NCEP, there is clearly a pattern left. He didn't mention that... But he did look at the match to the RS dataset: which was interesting: looking at the fit over the RS and non-RS areas shows patterns that on first insepction look bad for ERA, though imperfect for NCEP too. So I ask, "you expect an instantaneous response?" and clearly they do, since they are correlating unlagged T and Solar. But this is the opposite of what the prev speaker did, though on rather different timescales. And its fairly clear that they haven't really thought about this. The answer I get is "but these are very different timescales" but I don't find this fully convincing: the 50-y average of a good correlation should still be good. They are at the correlating things stage, which is a long way beyond the modelling/mechanisms used for GW type stuff.

After that, brief attempt to make wireless work: fail: the DHCP is broken, apparently.

Coffee time: there is no coffee, unless you get there early or Q long. This is tradiational. To my/our poster (hadgem sea ice vs hadcm3 vs obs), with AJ, and find a Met O chap reading it (JKn, I think), and we have a good talk about the poster, and hadgem. Bill Hibler has the poster next door but its technical. Other misc posters, finally meet Joy S.

After this misc; get wireless working (the man in the magic brown jacket knows the answer, which is 10.59.1.x. Aha! Meet up with NvL, now in Munich; and James Annan, who has a mail from RL saying that the quote at the bottom of http://www.reason.com/rb/rb111004.shtml - viz, Richard Lindzen says he's willing to take bets that global average temperatures in 20 years will in fact be lower than they are now is actualy a misquote, and he won't make any such bet. So JA is trying to pin him down. Doubtless RL will be writing to Reason to correct this misquotation which might potentially be considered a bit misleading.

Lunch: again, Q's of stupendous vastness, fortunately I have half a roll I didn't finish at breakfast :-). Again somewhat worse than Nice, where the cafes began just outside the venue; here the conf is out in "UNO city" about 10 mins U1/metro from the center.

Try to see a solicited talk about N Pacific T from argos floats; but cancelled. Only realise this when I start hearing something different (and less interesting). Still, the wireless now seems to work in the lecture halls. Skip out in the hope of coffee (missing Lherminier and Mertens, sadly (thats a mustelid joke folks).

After to the polar session, and about time too. It is mostly Arctic, which is dull, since we all know the Antarctic is far more interesting. Goosse gives a talk about NAO, modelling, etc; trying to select the best run (from more than 100 of the last 150 years), the idea then being to use the best run to help diagnose what has happened. This might be an interesting idea but isn't worked out in detail yet.

After yet another coffee break without coffee (it seems that the only way to get a short Q is to take your coffee breaks during the sessions), back to Polar. Peter Wadhams is still doing the ice-thickness-from-wave-propagation stuff, but no actual results yet. Dethloff on "global impacts from the arctic" but this turns out to be mostly changing the albedo parametrisation and discovering the effects on h500, which don't seem to be huge, though predicatably enough there are blobs scattered around, somewhat on an NAO/AO-ish style.

Elizabeth Hunke (so thats her! I've written a paper with her, and now see her talk,
and then go up and say hello afterwards): some interesting differences in the
kinetic energy of ocean models runs with Gent-McWilliams vs Biharmonic diffusion. GM is cleverer (hadcm3 and hadgem use it, it does lots of good things), but appears to be lacking in the Arctic, and this turns out to be because of some scale-selectivity of the diffusion which over-smooths in the smaller grid boxes (only when you get rather close to the poles, past 70 ish). The obs being sparse its not too easy to say which is correct, but runs "correcting" the over-smoothing looked good.

Then arctic sea ice (var and declines; interesting freshening of deeper waters) and water masses and stuff: quote "ACIA may be over-optimistic" in that the changes could be faster than that... still, with natural variability, its hard to be sure.

And thats it for the day. The wireless magic IP numbers have changed, but DHCP is still not working. I get some new magic numbers, and somehow accidentally type in an incompatible gateway/ip combination: nonetheless it works. How odd. Cafe time...
Posted by William M. Connolley at 10:37 am