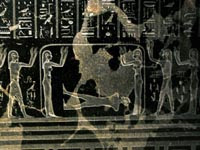 This is a piccy from the Kunstmuseum egyptian section, one the side of one of two huge basalt sarcophogi they have. Amazing workmanship for something 2kyr old. Caution: it might somewhat offend people who don't like hardcore...

But on to the science. Starting with Stephan Rahmsdorf (of RC fame...) presenting The Case for Anthropogenic Climate Change. By which he doesn't mean why it would be a good idea. Mostly, he is reminding us all of the std case, the overall picture which can sometimes get lost in the details. He draws an interesting distinction between the two cases: (a) that there is an anthro signal in 20C climate, and (b) that there will be anthro ch in the future. And points out that only (b) is policy-relevant, and that a and b are logically distinct. Which are both quasi-true, but of course they are linked: the same models that reproduce 20C are used to run forwards; and if you are the sort of person who can't cope with the 20C results you are liable to reject the future ones too. Finishing with what is the climate sensitivity? The 1.5-4.5 oC value has been around for a while now, and he suggests more convergence at around 3 oC. And certainly (see below) the UK and French AR4 trends end up similar to the TAR trends.

Dansgaard-Oerscher events session: dip into this for a few talks just long enough to discover once again that I don't get much from them. D-O events exist (during the last ice age), they have global implications (they can be seen in, say, Indian ocean proxies). But apart from that, what? They are either quasi-1500 year periodic, as a result of internal osc of a non-linear system; or they are exactly 1490y periodic (with a few missing; Rahmsdorf, recently) which implies an unknown external forcing. And then Bond now says that his haemetite-stained-grains as a proxy for arctic ice advance-retreat says a 500 y cycle fitting into the D-O cycle. Errrm.

A trilogy of talks about IPCC AR4 simulations from 3 european models. Firstly (of course...) HadGEM1. Probably the key end result is that the transient global temperature trends are about the same as for hadcm3. In more detail: hadgem is now n96 (ie, twice cm3 atmos res, etc etc: see the tech note for details). Gem has mostly lower land-sea trend contrasts, ie the land warms less and ocean more than cm3, except, Antarctica warms more, though the diffs aren't large. The ocean heat uptake is sim to cm3, perhaps a bit more. Storm track changes (to CO2 doubling) small. Rather more interesting to me are the P-E changes over Antarctica and Greenland, which are rather different to CM3. Ant P-E increases by a factor of 3 more: due to inc T there and higher P there to start with, apparently. Which bears investigating: since the Ant ppn was a small lowering of sea level in cm3, it might now be a rather larger one. Over Gr, the reverse: there is less melting in GEM. As for the THC changes, GAM starts with a lower THC than CM3, but the drops are about the same, so the GAM % drop is larger... The number of IPCC scenarios run seems to be growing: a1, b2, a1b, etc.

Salas-Melia, on the CNRM-CM3 model (nb their CM3 isn't anything to do with hadcm3). And again, the AR4 trends are pretty similar to the TAR, with various details.

Hagemann: the MPI model, completing the trilogy of european coupled models. He mostly talks about the hydrology, which appears rather messy to me - river catchments and stuff. The coupled simulations show improvements over the AMIP (ie forced SST) runs. This is in some senses wrong, in that it means there is probably some cancelling of competing errors in the improvement, but he also asserts some improvements via the coupling process. Hmm.

A Danish sim of 1500-2000. Not sure exactly which model (probably echam/opyc, but run with Danish forcing). End result is lower var that von S - fits between Moberg and MBM.

NARCCAP (www.narccap.eucar.edu) talk: but I'm not interested in regional models... Phase I involves 50km res regional models run from NCEP/ERA boundary conditions. But why bother, since ERA res is just about 50km anyway (isn't it?; it can't be far off).

Last of the morning: is cl ch res dep? Looking at ECHAM4 (t106) then REMO
regional model (for eastern Europe) at 0.5 degree and 0.16 degree. Forced, I think, by SST changes from a transient run (with the REMOs run from ECHAM4 atmos boundary conditions, I assume). And the end result is... no, it doesn't make a great difference. But of course the regional model only has limited freedom, as it should be.

Boring first after-lunch talk (I won't embarass myself or the speaker by saying who; while away the time by finding that there were more than 25 talks I could be attending at 13:30, not to mention the poster sessions) redeemed by an excellent poster session with a number of interesting ideas, notably from James Annan. He has several posters... one on a futures market for climate change, trying to explain to the climate folk how these markets work, the value of y/n coupons and stuff. Which I confess I find rather hard, probably just the unfamiliarity. It is said that weather futures markets demonstrate useful weather-type predictability up to a month ahead: www.cme.com/files/EPSept03.pdf. More mainstream is his (why do I keep saying his? They are joint with Julia Hargreaves) on ensemble Kalman filters for doing things more efficiently than climateprediction.net (or Qump). He convinces me though I'm still a little unclear what an eKf actually is, in some sense it constructs the probability distribution function for a perturbed-physics ensemble. Then you weight the sensitivities for 2*CO2 by how well they match the LGM (of about 5-7 oC). And you get 4 oC +/- 0.6 oC, plus or minus some problems with the ancil files.

Someone on the probs of exceeding 2 oC T change... which has recently been re-affirmed by the EU heads of state as a target level. So, with 550 ppm you get a pretty good chance of exceeding it, and you have to drop down to 400 ish to be reasonably sure of not doing so. So we will exceed it.

Mori on ICA which is better than PCA/EOF apparently.

Climate sensitivity. James A again! A rather good (as far as I can tell) talk but the details are complex: he really needed an hour not 15 mins, at least if he wanted to make me understand it all. So... using the forced Lorenz model as an example (Palmer), and a deliberately imperfect model (ie, by making one of the parameters wrong) he then fits, using the std techniques, an ensemble of models to the "obs". And the point is not to get the right results (its "climate sensitivity": you get the wrong answer, and you know you will) but to get a result where your estimate of the PDF of the climate sens includes the true value within what you consider to be the 95% range. And he demonstrates that the std estimate doesn't do this: the true value is 25 stdevs away. But... aha, using magic (including the model error in the metric) you still get the same wrong asnwer *but* you end up with the true value within range. Then, comments on the Murphy et al Qump results, pointing out what appears to be an arithmetic error of theirs, which effectively scales their results, and I think the point is that this scaling makes their results fit, whereas if they hadn't they wouldn't. An anonymous questionner asks if simply scaling the J matrix (cost function) makes no difference but this seems to be not true, or at least JA maintains it so.

Frame: CP.net stuff. Not what I wanted to hear (which was, what happens when you exclude the implausible results based on tighter criteria) but misc: fixing the entrainment doesn change the spread of climate sensitivity. Fixing the cloud scheme does: with just the std scheme, the max goes down to about 6 (from 12 oC).

Enough. I'll just about survive tomorrow I think.
Posted by William M. Connolley at 10:19 am