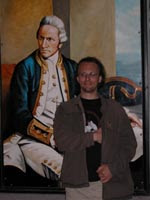 Day dawns sunny and bright. I linger a bit over breakfast and photographing Stephansdom and therefore miss the first talk of the session (Holocence climate swings) which was on the obs. BTW, I should mention that EGU is massively parallel (don't know how much, at least 10 simultaneous sessions) so there are usually several talks I would have liked to go to but don't. The photo is from last night, and shows me outside a typical English pub, the Lord Nelson. They didn't have any bitter though.

Talk 2 is Beer on the forcings, with lots about solar. He says that most of the irradiance reconstructions are scaled to a Maunder Minimum value. He doesn't believe (and gives the impression that this is generally so) Lean's value of ?0.24%? based on sun like stars, which leaves the question of what the value actually is "open".

Cubasch then does the modelling aspect, mostly over the last 1000 years, which is mostly the von S Science paper. The forcing (it emerges in questions after) is probably the Lean '94 (not '01) that people now think is too big. They combine (for quickness) solar+volcanic into a modified solar input, which then looks like small variations and big downward spikes for the volcanoes. This presumably misses interesting interhemispheric diffs you would get if the volcanic went in more realistically via aerosols. He compares his results to Mann and to Moberg (ignoring all the others) and finds, of course, a better fit to Moberg; but is careful to leave open the question of which is correct. He also claims a natural Hadley run supports his model - must take a look at that (apparently its in the supplementary material for the von S Science paper).

Tarasov does some archaeology for a site in China. A bit detailed, in itself, but this is to illustrate (1) the value of interdisciplinary talking and (2) to point out the way that people from different disciplines view one anothers data... modellers tend to believe the obs, whereas to obs people know enough of their faults; historians use "MWP" myths to support his studies which the climate people take up to classify their results which the hist people use to... and it can be somewhat circular.

Vinther: an innovative attempt to deduce temperature profiles from the GISP site. The idea being that the diffusion of the O18 signal in the firn is T dependent, in the upper cores, so for suitable cores, with enough but not too much accumulation you can potentially invert the reduction-in-seasonal-o18 signal to deduce T. This applies for 4kyr at GISP. And the result is... about 3K drop over that period. Which is more that the raw d-O-18 gives you, and more than inversion-of-borehole-thermo gives you, at GISP. So it was clear that there was opposition to this new idea, presumably people will check it out. Qs were, how do you know there wasn't a ch in the input seasonality cycle (eg from Milank; sez Beer) over that period? Ans was that at Dye-3 (where acc is higher, so diffusion doesn't smear the seasonal cycle) there is no corresponding ch in amplitude.

And lastly some sea ice. Results from IPCC AR4 runs from Salas-Melia; and some sea glider obs of, err, a piece of sea which all the oceanographers knew by name but I didn't; poss the Labrador sea; between Greenland and Canada. Sea gliders are fun: they are about 2m long, and they glide. So they are better than buoys (you can direct then, pre-programmed, on various trajectories) and better than powered AUVs (because they use little power they can stay out for 6 months).

And now I'm bunking off for a nuice sunny afternoon of Vienna-viewing.
Posted by William M. Connolley at 9:52 am