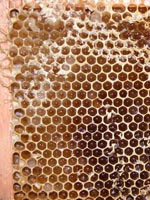 I'm a beekeeper. You might have noticed. In the long-ago, about this time of year, people would be leaving their bees to get on with it. But in the UK nowadays rape plants are commonly grown for the rape seed oil, and in the spring time these produce vast acreages of bright yellow flowers (I think it looks quite pretty: many people hate it). They are also very good for nectar flow, and produce large amounts of honey. But. The honey very rapidly granulates. So much so that you can't leave the bees to cap it over, it has to be taken out (about now; and perhaps again a few weeks later), spun out and bottled. If you don't, it just granulates in the comb and its uselss to the bees, and then you have to melt the comb down, which is messy and painful.

The photo shows a corner of a frame left in a bit too long (I should have done it on sunday, but we were in Oxford for M to take part in a piano competition (round 2). She came second (a close second we thought...)). Over on the right, the darker cells are liquid. Rightwards, paler brown are partly granulated; some white ones are solid. I spin it, most of the liquid comes out, put it back on a hive and hope the bees will turf some of the granulated stuff out. If you look closely, you can play spot the wax moth larva.
Posted by William M. Connolley at 9:42 pm

Funnily enough...I'm also a bee keeper. I suspect it the weather/climate link. They do link closely with the weather - they're proxies if you like :).

We don't get fields of OSR down here much, but this year is an exception. My valley based 'swarmers' exploded thanks to it (despite the cold) swarming last week and (becuase it's still been too cold and wet to look) massively 'casting' on Monday - all were caught though :). My other colonies, higher up here on the moors edge, are really just hanging in there - its' been really pretty darn cold this month.

Thus, and considering its honey sets link rock, I'm not entirely convinced of the merits of OSR :). Still, at leadt the honey is saleable, another spring honey, dandelion, tastes indescribably disgusting. Holly honey, otoh, is delicious - if rare. There is still some hope we might get some of that this spring. Fingers crossed.

It has been cold. My one hive (I had 2 others but gave them away to deserving causes) picked the one warm afternoon (Sunday May 1st, I think it was) to swarm.

I too doubt the virtues of OCR (I just think it looks pretty; JA says you can eat it...) because I like to do my extracting when I want, not in a rush (kitchen now full of misc extractor, honey jars, etc). But at least I didn't need to bother uncapping it, since I now know enough not to wait until its capped.