Before the post, a quick joke, brought on by the word "Gazillion": Bush in the White House; an Aide says "Mr Prez, I'm afraid that 3 Brazillian soldiers were killed in Baghdad today". Bush is shocked, to an unlikely degree, and the surrounding Toadies are surprised. Bush asks: "Just how big is a Brazzillion, anyway?" (here is one source). And if you didn't like that, you can try The Onion. 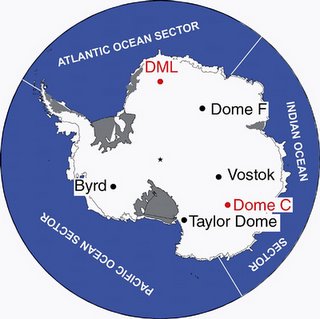 But onto more serious matters. Nature has a report about some new ice cores from Antarctica (thanks het, who has more links), and something of a race for the first "million year old ice". Kohnen Station in Antarctica's Dronning Maud Land has a new core, and Preliminary tests show that the bottom of the core might be as much as 900,000 years old. They sensibly hedge their bets with The age will have to be confirmed in their laboratory back in Germany, "but we're pretty confident,". But no sooner is this in, than Japanese scientists working at the Fuji Dome Antarctic research station said they have retrieved an ice core sample that could be up to one million years old (again, hedged). If you're wondering where all these various cores are, then look at the pic; original here.

But the important thing about ice is not how old it is (if you want super-old ice, go mine a comet; mind you that might be quite expensive too...) its how well preserved it is and its stratigraphic sequencing. There are, if you look closely at the Nature report, hints of this: The Kohnen core should also provide more detailed climate evidence than the one from Dome C, at least for more recent times. In the upper parts of the core, ice accumulated more than twice as fast as at Dome C, so it will be easier to distinguish between ice layers laid down in consecutive years. The ice at the bottom of the core, however, seems to be at least as old as that at the bottom of Dome C, so it must be very compressed. Err yes. So we'll get a more detailed *recent* record (which may have some value, e.g. looking again at D-O events in the Antarctic) but that could have been got from a much shallower core. And we'll get a record from a different sector (nice to see how things co-vary). But... a more detailed recent record implies a less detailed deep record; which is probably the greatest interest. The EPICA core goes down reliably to 780 kyr; does the Kohnen core provide useful info for [780,900] kyr? It will be good if it does. OTOH, since Kohnen isn't at a dome, the bottom is probably smeared, and very hard to work out where it came from.

And a postscript, on how rapidly things get sensationalised: Researchers dig up million-year-old ice (bad headline, text not so bad). Ditto from physorg.
Posted by William M. Connolley at 7:53 pm

My understanding is that what is most wanted now is the record for the Mid-Pleistocene Transition at 950K bp. It sounds like these cores may be a bit marginal for that purpose.

There was the one also where he told the head of Brazil, "you have black people too?" Condi had to intervene.

It's an urban legend too, but pretty funny.