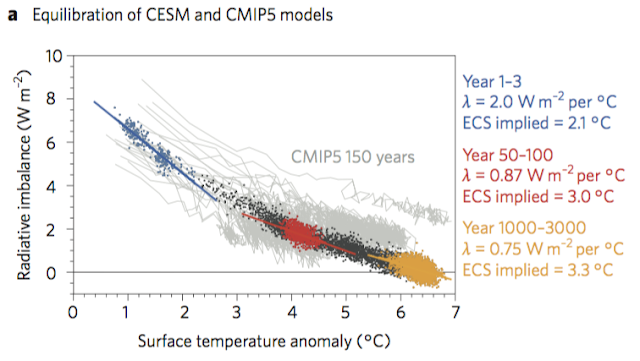 Or, ZOMG! We're all doomed, part N. Via fb (but not so far Twitter), phys.org tells me "Global warming is likely to speed up as the Earth becomes increasingly more sensitive to atmospheric CO₂ concentrations, scientists from the University of Reading have warned. In a new study, published this week in the prestigious journal PNAS, the scientists explain that the influence of increasing levels of atmospheric CO2 on global warming will become more severe over time because the patterns of warming of the Earth's surface will lead to reduced cloud cover in some sensitive regions and less heat being able to escape into space." And so on. However, if you read the article you'll notice one thing missing: any form of quantification. Also, if you miss the "why" in the headline, the article will give you the impression that the paper is reporting the idea of warming speeding up. But it isn't; the paper in PNAS (Relationship of tropospheric stability to climate sensitivity and Earth’s observed radiation budget by Paulo Ceppia and Jonathan M. Gregory) whilst undoubtedly perfectly sensible (or so I assume; I haven't sullied myself by reading it, of course) is actually about explaining the pre-existing observation from modelling studies.

Which rings a bell; and indeed the answer is Beyond equilibrium climate sensitivity by JA, whose picture I have shamelessly stolen; after all, he did too. C+G's abstract reads in part:

The change in climate feedback is mainly associated with a decrease in marine tropical low cloud... and with a less negative lapse-rate feedback, as expected from a decrease in stability... Relationships qualitatively similar to those in the models among sea-surface temperature pattern, stability, and radiative budget are also found in observations...


That gets written up by phys.org as "The findings are supported by observations, suggesting that forecasts made by climate models evaluated by the Intergovernmental Panel on Climate Change are realistic." I think that is literally true, but very easy to misinterpret as "observations say that warming will speed up", which is not what I think they are saying.

Notice also that while the "speed up" is rather noticeable if you start from year 1, if you compare years 50-100 to 1000-3000, you get a rather small ~10% difference, which is well within the margin of error ECS is "known" to (although that's sort-of not relevant; what this is saying is that whatever the "real" value is, it is a bit bigger than you think. On yet another hand, I'm dubious about worrying about more than a century into the future anyway).

I think my conclusion is that the original "speed-up" idea is interesting but relatively minor; the new paper is scientifically interesting but not of any great interest to the general public (because it simply provides a plausible explanation for an existing observation) and so the PR for it is hype.

I mentioned this came from fb so I'll quote what I saw there, while sparing the blushes of the quotee: "A paper published in the prestigious "Proceedings of the National Academy of Sciences" this week reports that, climate sensitivity, the amount of near-surface planetary mean temperature rise per increase of greenhouse gas concentrations, is increasing. Our planet sees more warming for less CO2. This is a precursor to a "Runaway Greenhouse" condition." This is wrong, obviously; but not too hard to read into the phys.org article.

* There once was a polar bear – science vs the blogosphere - Bart Verheggen
Posted by William M. Connolley at 8:21 pm

They seriously lose me with this phrase

The climate change simulations that best capture current planetary conditions are also the ones that predict the most dire levels of human-driven warming, according to a statistical study released in the journal Nature Wednesday.

The study, by Patrick Brown and Ken Caldeira of the Carnegie Institution for Science in Stanford, Calif., examined the high-powered climate change simulations, or “models,” that researchers use to project the future of the planet based on the physical equations that govern the behavior of the atmosphere and oceans.