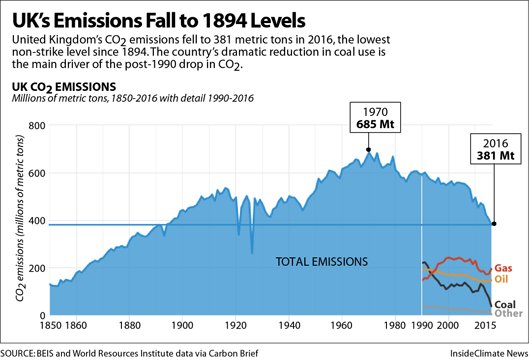 Via Twatter comes this interesting graph. We're back to pre-1900. At first I was deeply suspicious, but I think it holds up. The claimed source is "BEIS and World Resources Institute" via Carbon Brief. And that leads me to UK Carbon Emissions Fall to 19th Century Levels as Government Phases Out Coal (from March, so I'm hardly up to the moment). Which is I think wrong; the UK govt doesn't burn coal, it leaves that up to the electricity generating companies, as you'd expect. If we're attributing most of the drop to the loss of coal, then we can expect progress to plateau soon, because as the detail shows, we're almost out of coal to stop burning.

They say (apropos of this discussion) "Carbon Brief also attributes the precipitous drop in emissions from coal to the country's carbon tax, which doubled in 2015 to £18 ($22) per metric ton of CO2" (so perhaps we can credit the government to some extent :-). Of course, $22 per ton (per C? Per CO2? I can never remember) isn't large by ~$50 type standards which are what I tend to think of as "about the right value". But if that's big enough to have the "desired" effect, then fair enough.

How much is due to outsourcing manufacturing to China and other low wage economies?

That's hard to answer, but the premise of your question may be wrong. We don't make so many cars any more, but our cars aren't built in China, they are built in other high-wage countries by robots. South Korean builds more ships than anyone else. We import steel, but mostly from the EU (http://www.issb.co.uk/news/news/uk.html).

If mentioning China/low wage economies offends you or is a mistake and should be any other country, let me withdraw/correct that.

Steel is high energy but is hardly the only product that uses energy.

indicates it isn't all that big a factor in the decline of emissions from 1970? So maybe decline of coal is the major factor?

Or maybe we were big exporter of steel/steel products in 1970 and importer now so balance of trade as % of GDP is a poor guide to emissions effects of that manufacturing?

Whether we blame or praise government for 'phasing out' coal or for globalisation does seem a bit wrongful attribution, but that is unimportant or irrelevant. Whether it is beneficial and whether it will continue does seem much more important.

Moving manufacturing to less clean and efficient places and increasing transport seems like a bad idea for overall ecological effects.

Well yes it would be. But haven't you forgotten your retraction? The EU isn't less clean.

This is actually very good news. Has it been widely reported?

I thought so too. I don't think it has been "widely" reported, at least not in this form. Or at least, I missed it back in March.

Though now I look I find it in the Graun and the FT so perhaps I just wasn't paying attention.

Maybe "Whether it is beneficial and whether it will continue", is irrelevant also.

"A new report from Bloomberg New Energy Finance (BNEF) predicts that 305,000 MWh of energy storage will be installed between 2017 and 2030, or 2,364 projects the size of Tesla's South Australia storage system."

This is obviously to cope with large scale renewables deployment.

We're not a million miles from record highs of vehicle manufacture:

Hmm yes I'm falling victim to the usual "<insert country here> industrial production is collapsing", which is generally not true. Wiki has a nice table which supports what you say.