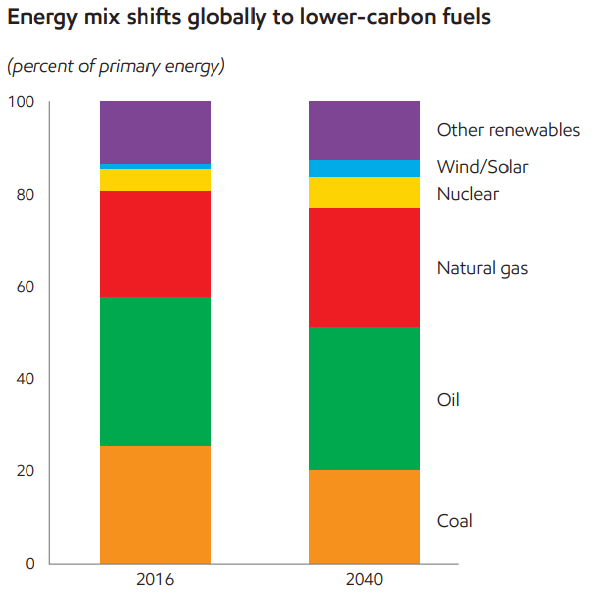 It's a report, the 2018 Energy & Carbon Summary. And (to confess a guilty secret) I came to it via WUWT. Well, I wouldn't have had to if the rest of my blogging sources were doing their job properly. And if it helps, the Watties have it from the NYT. You'll recall, I'm sure, that the Nasty Shareholders had demanded last year that the company give a more detailed accounting of the consequences of global policies aimed at curbing emissions of earth-warming gases. I cannot, now, recall if I wrote about that. The NYT's summary of the company's response is Exxon’s conclusion: Even aggressive climate policies pose “little risk” to its investments. It stressed that it expected healthy demand for its products for decades to come, regardless of how strongly countries move to cut emissions.

Predicatably, the NYT has no problem finding someone to disagree, and that person is Adam Scott (who?) who points out (a) Exxon assume CCS; (b) maybe we'll decide to hold warming to 1.5 oC; (c) lawsuits! To which I would answer (a) I'm dubious about CCS too but I doubt much of Exxon's answer hangs on it; (b) ho ho; but anyway, I think Exxon assuming Paris is probably reasonable; and (c) well, I think that's all drivel as I've said many times before, but since it is lawyer-drivel, you never can tell.

But enough of that. What does Exxon actually say?

Letter from the Chairman


The chairman has a page of stuff to say, read it yourself, of which I'll select:

Providing affordable energy to support prosperity while reducing environmental impacts – including the risks of climate change – is our industry’s dual challenge... The global energy system is massive. The world needs solutions that can scale... Our algae biofuel program holds great promise... We are also a leader in carbon capture and storage (CCS) research. The world will need much more CCS... Policy has a place here, too. We’ve been vocal in our support of a carbon tax, and recently joined the pro-carbon-tax Climate Leadership Council. We also support the Paris Agreement.


All of that is spiffy. Read as PR, it's all in the right direction, and Lee Raymond wouldn't have been seen dead saying any of it. In 2015 I was rather dubious about their actual, as opposed to nominal, support for a carbon tax. But enough of the obligatory glad-handing, what of the substance?


For all you busy mustelids with the attention span of a lagomorph, they provide a handy summary. Dubious point #1 is "Worldwide electricity from solar and wind will increase about 400 percent" to 2040. This looks like a classic case of the Photovoltaic growth: reality versus projections of the International Energy Agency – the 2017 update fallacy (but, if they're relying on WEO predictions, that would be entirely defensible in public). And now I come to look, the pic I've just inlined and stuck at the top probably says it all. They're really predicting very little shift to 2040.


Says "The annual Outlook for Energy represents ExxonMobil’s updated view of the most likely future for the global energy system and forms the foundation of the company’s strategic decisions, business plans, and investments". So quite likely I'm reading the wrong base document (there's a graph on page 7 which shows their Outlook CO2 scenario to 2040). It also helpfully notes that "While the current NDCs do not appear to achieve a 2°C scenario, the Paris Agreement is a positive step in addressing the risks of climate change".


The "Exxon collapse" scenario - assuming you don't believe the lawsuits - is based around the stranded assets idea. So they have to address that problem, and it doesn't appear too hard for them to do so:

At the end of 2016, ExxonMobil’s proved reserves totaled about 20 billion oil-equivalent barrels, of which approximately 53 percent were oil and 47 percent were natural gas... value of an integrated oil company’s upstream operations is its proved reserves... we estimate that by 2040, over 90 percent of our year-end 2016 proved reserves will have been produced. Considering that the 2°C Scenarios Average implies significant use of oil and natural gas through the middle of the century, we believe these reserves face little risk.


I'm channelling Hobbes. I hope you noticed. So: anyone who hoped that the shareholder vote would make Exxon write down a report and then go "Holy shit! You're right: now you force us to look, we realise it's all going horribly wrong" will be dreadfully disappointed. Instead, they've written down a report that justifies them continuing to do exactly what they planned to do already. Weird or what? The advantage - other than providing employment to some report-writers - is that it is all written down now. If you don't like their conclusions you can read through their arguments and attempt to spot the gaping flaws. If you think you're hard enough.

"It is difficult to get a man to understand something, when his salary depends upon his not understanding it!" -- Upton Sinclair

Much like the IEA and solar, the value of this report will come only after repeatedly bad forecasts. I suspect that there will be both over optimism and over pessimism sections.

If future battery cost projections are close to accurate, local delivery trucks might be mostly electric by 2040. That might be half of the commercial fuel usage. This might mean that total oil usage could be lower in 2040 than in 2000.

We can’t connect to the server at www.positioning%20for%20a%20lower-carbon%20energy%20future.com.

I didn't try other links.

I've fixed the link; thanks for pointing it out. Forecasting is, of course, well known to be difficult, especially of the future.

I guess repeating your " 'Electricity from solar and wind increases about 400 percent' tel me another" doesn't count as being hard enough.

They separate commercial transportation from 'light duty' with commercial continuing to increase the demand for oil but light duty seeing some electrification. Is that in denial of Tesla Semi 500 mile range on a single charge or is Tesla semi specs still considered vapourware that is impossible to achieve?

Having admitted some electrification of light duty, they still show that sector barely falling so increased GDP almost replaces the fall from electrification. Once electric is demonstrated to be cheaper, I imagine there would be almost complete conversion by a decade later. GDP growth still almost keeping up by 2040 ?????

With (essentially? exactly?) no non-light-commercial electric right now I think it is difficult to forecast it's future.

However, I think this is why this report - and the demand for it - is so pointless. Different people have different ideas. Some people may think commercial electric will come much earlier than Exxon, and be prepared to bet serious development money on it; and if they are right, they will do well. Or maybe Exxon are right that it won't come so early. But you can't *force* people to be right.

As an aside, and a spur-of-the-moment thought, what about the combination of electric and self-driving? Maybe that makes range less important; the self-driver doesn't mind that it is sitting around waiting for recharge. Maybe it affects scale: you don't need a big truck to make best use of your expensive humans. And so on.

Self driving probably changes the economics more than Electric vs ff. How many self driving non electric vehicles are being developed? I believe the answer may be none but maybe that doesn't matter.

Long recharge time but less than the driver rest time might mean self driving commercial truck co worries more about recharge time than with human driver. Short range and frequent recharge stops doesn't sound ideal at present as in travelling more distance out of way to find recharge stations but eventually recharge stations are everywhere needed and that might be preferable but I would expect batteries prices to fall so you don't need to compromise in that way.

> difficult to forecast
As in bi modal probability distribution - high chance of high percentage of electric vehicles but also a hump with much less change in the electric %?

Seems like they are assuming that the little change outcome is the only possible outcome to me. If their job depends on it, what should we expect? Does this mean the protesters shouldn't have demanded it or that the value comes as several successive versions are repeatedly shown to be wrong? Or, is it counterproductive, in that it develops skills in continued ignorance forecasting and how to obfuscate in such reports?

BGR is currently my favorite as they SWAG resources in addition to the usual proven/unproven reserves (they appear to be somewhat tardy on a 2017 report, if 2017 is even in the works).

Then you have carbon budget estimates such as EDGAR v4.3.2, Global Carbon Budget and PBL. Of which the latest Global Carbon Budget 2017 suggests an ~2% increase for last year (2017) ...
http://www.globalcarbonproject.org/carbonbudget/17/files/GCP_CarbonBudget_2017.pdf
https://www.earth-syst-sci-data-discuss.net/essd-2017-123/

Then you have this from Pielke the Junior ...
https://wattsupwiththat.files.wordpress.com/2018/01/global-fossil-fuel-consumption.jpg
And this from BGR ...
https://www.bgr.bund.de/EN/Themen/Energie/Bilder/EnergyStudy2016/ene_primary_energy_2015_g_en.jpg?__blob=normal&v=4
And this from the Paris Agreement ...
http://climateactiontracker.org/assets/publications/briefing_papers/TempUpdate2017/CAT-2100WarmingProjections-2017.11.png

I really don't understand why this is so difficult to understand.

The Department of Energy's Energy Information Administration publishes forecasts. So does the International Energy Agency. So does BP. So does Exxon.

They all agree. All. The world is going to use more fossil fuels going forward as the developing world develops.

That is in spite of a very real desire globally to reduce consumption. Which eventually will happen--starting in about 2075.

You won't change Exxon Mobil until you change its customers.


Eli is old. Has he mentioned that recently?

In any case Eli is so old that he remembers when Exxon was seriously looking to isotope separation by various non centrifuge methods as a way out of the Carter years. The Bunny even knows or knew a number of folks who went over to the better paid side some of whom stuck. Sadly they found Ronald Reagan.