Notes the Graun, and I won't quibble. The most obvious thing you notice when going up is that the glaciers have retreated away from the huts and paths. Here's a sign above the Mer de Glace: 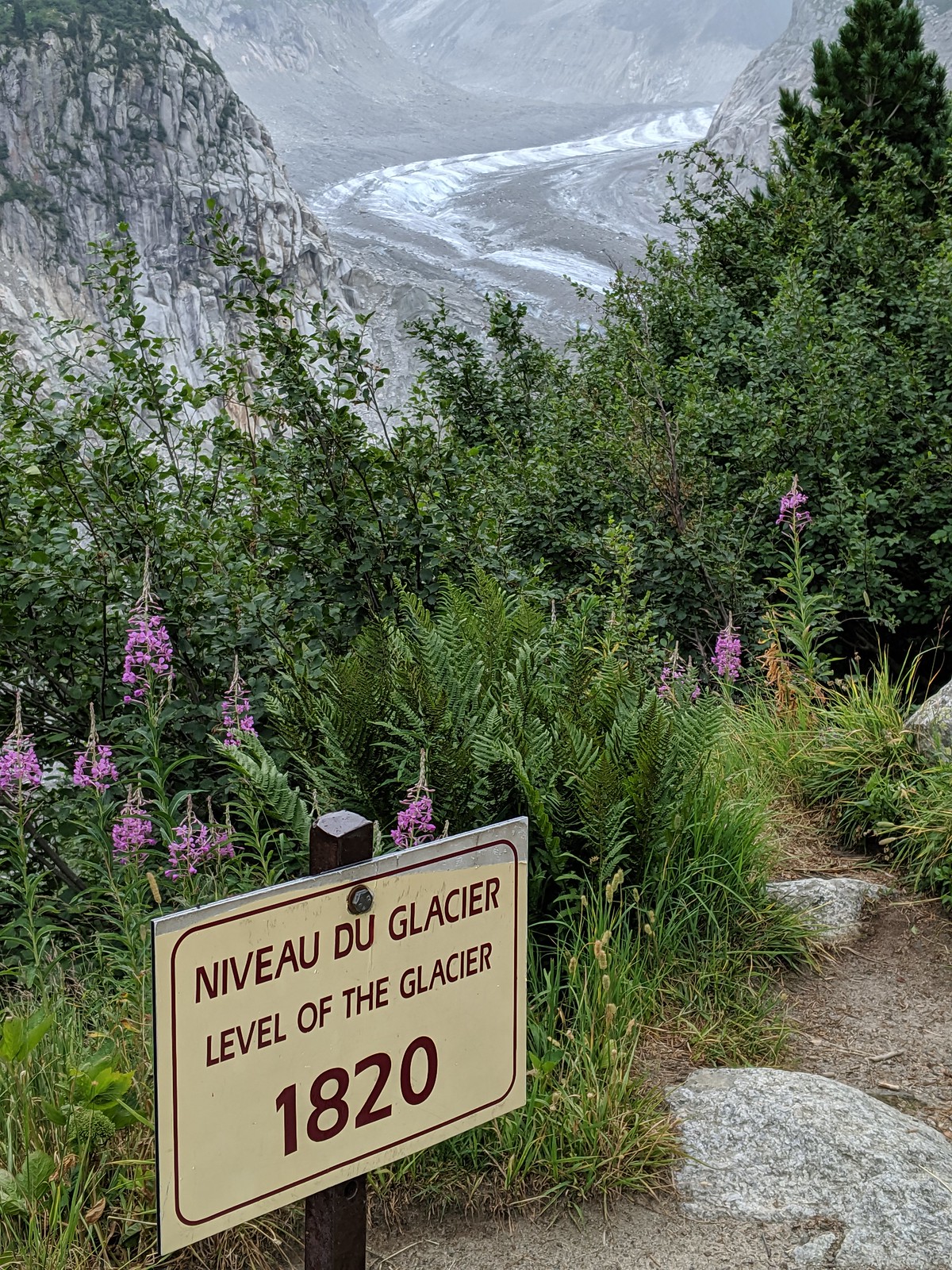 (regrettably it isn't in any other way interesting as a photo). That's above about 100 m of path leading down to about 100 m of ladders leading down to the moraine (the ladders on the other side up to Couvercle are even more exciting) from which you scramble onto the glacier. Looking across from the L (Couvercle) side (as you go up), here's a view across to the Aiguilles, and (if you click for the enlarged version and know what to look for) you can just see the refuge Envers des Aiguilles on the rock rib in the center of the pic. 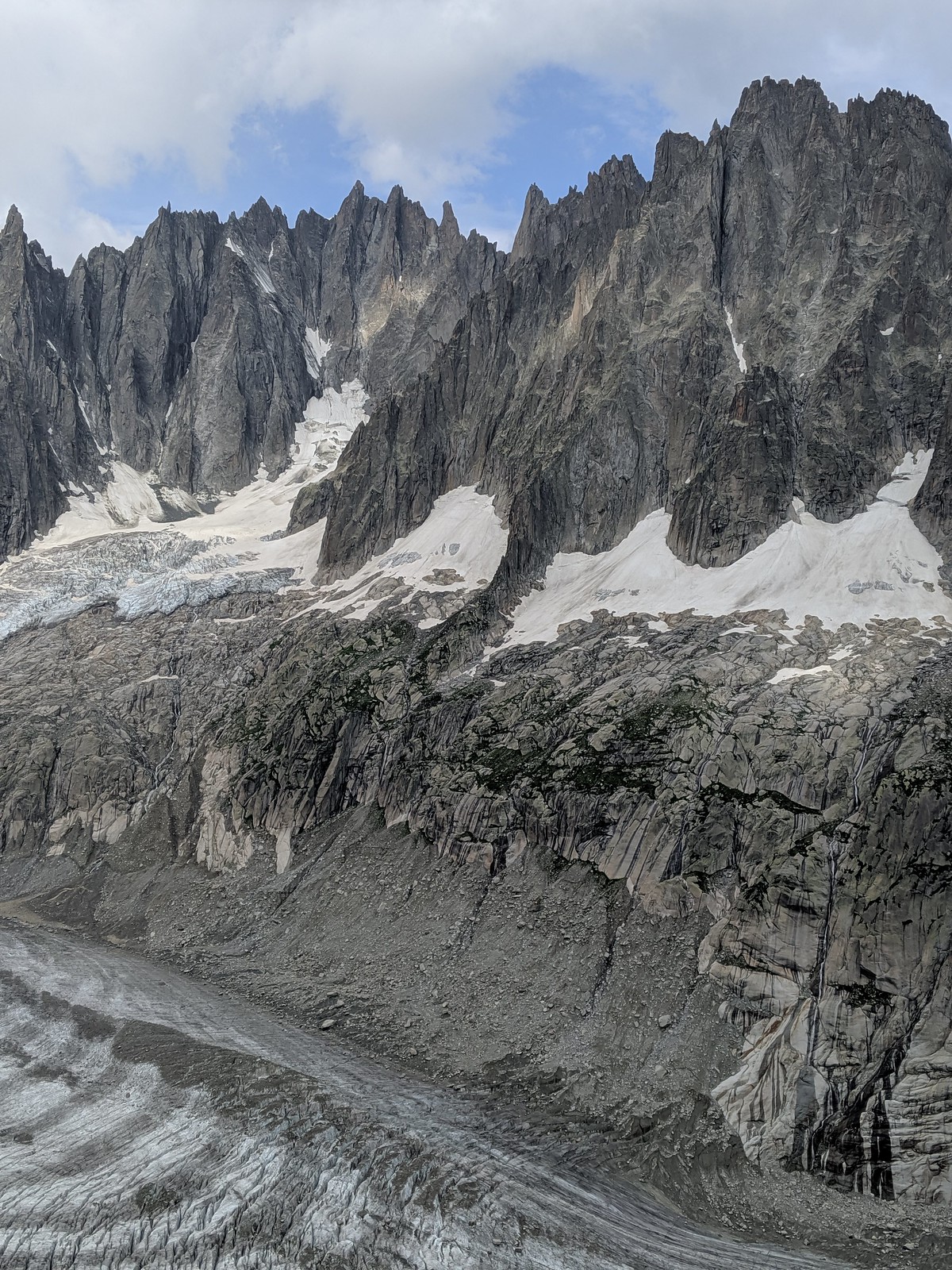 You can also see how massively the glacier has retreated (though to be fair not all of that is recent; it was a long way up the Envers ladders in 1992). As for the old things melting out of the ice, here's part of what I assume is a helicopter crash, unknown vintage, Talefre glacier. 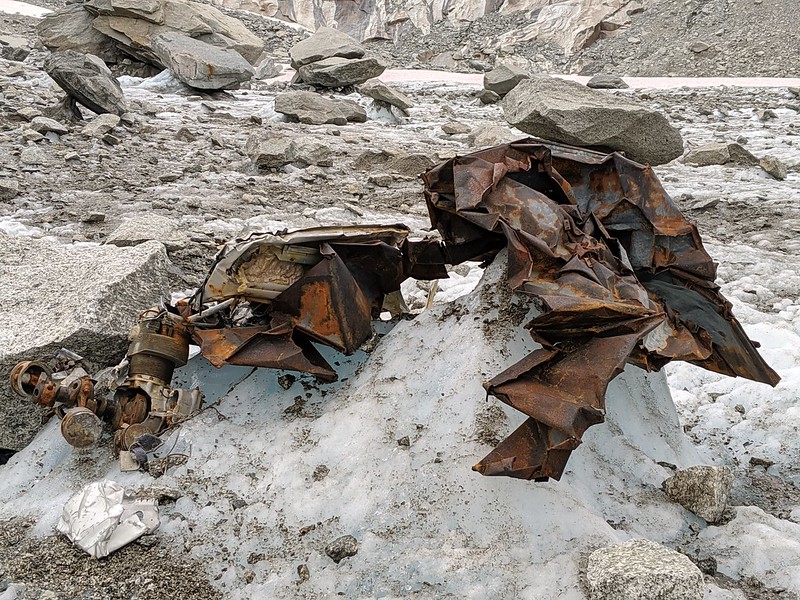 Also speaking of melting out, the ridge down from the Aiguille du Midi telepherique onto the glacier now has old bales of straw and bits of wood appearing, instead of the pure snow it used to be. Perhaps the residue of some old hut.

The Mer de Glace is bare and excitingly striped. You can just make out the Requin hut on the ridgeline in the center, in front of the icefall. 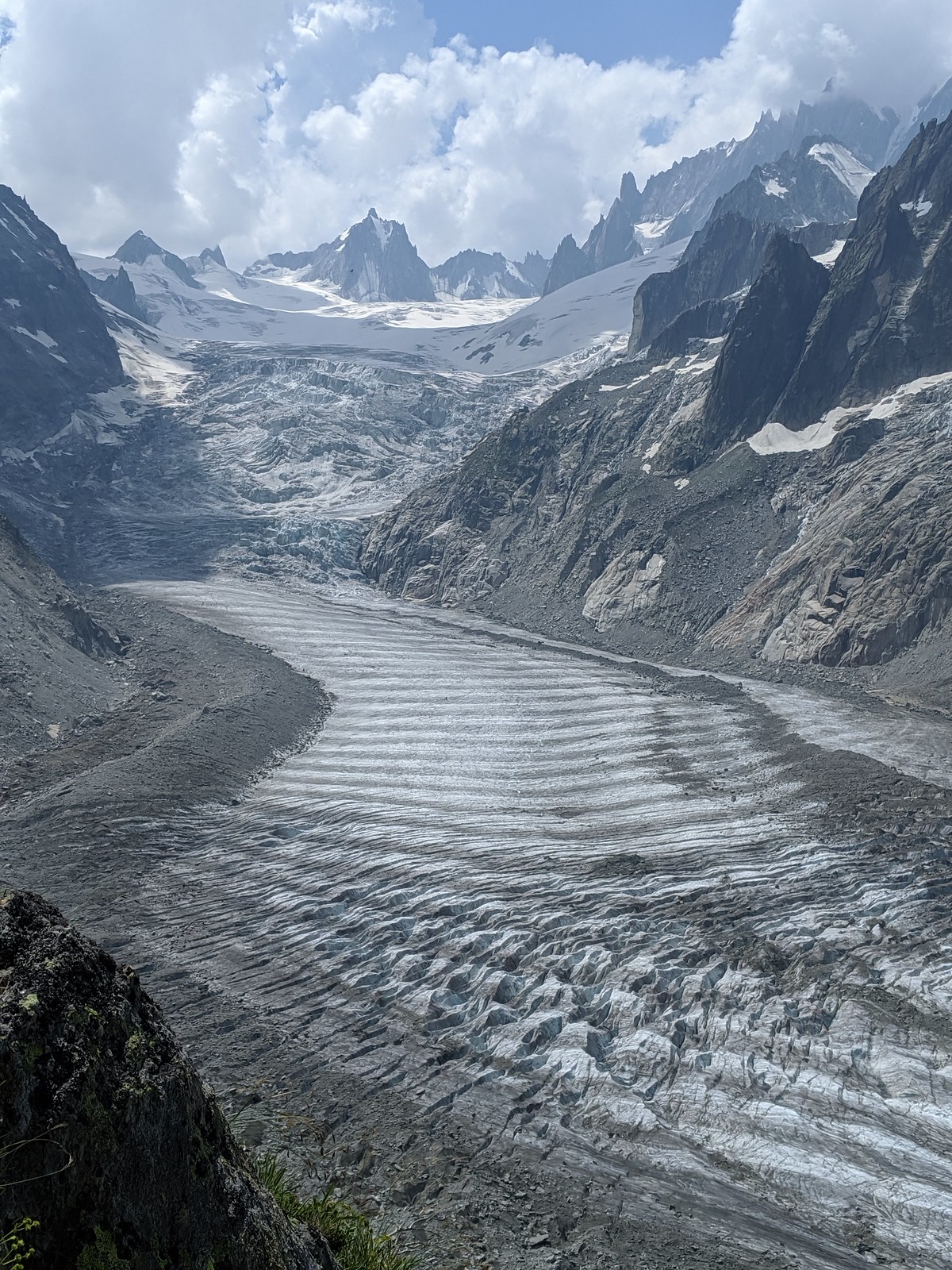 It is sad that the ice is melting, and the character of so many routes is changing. One of the reasons we went to Chamonix this summer is that by comparison, elsewhere, it can be hard to find reliable snow and ice. Mostly the changes are making things harder: the Dome de Neige des Ecrins is no longer Facile due to opening up of crevasses high up; a route we did this year on Pointe Isabella is now icy glacier; glacier; brief ice; rock ridge; snow ridge; rock; snow; and rock; whereas my old guide book shows it as continuous snow before brief summit rock. Though to be fair, that makes the route more interesting. 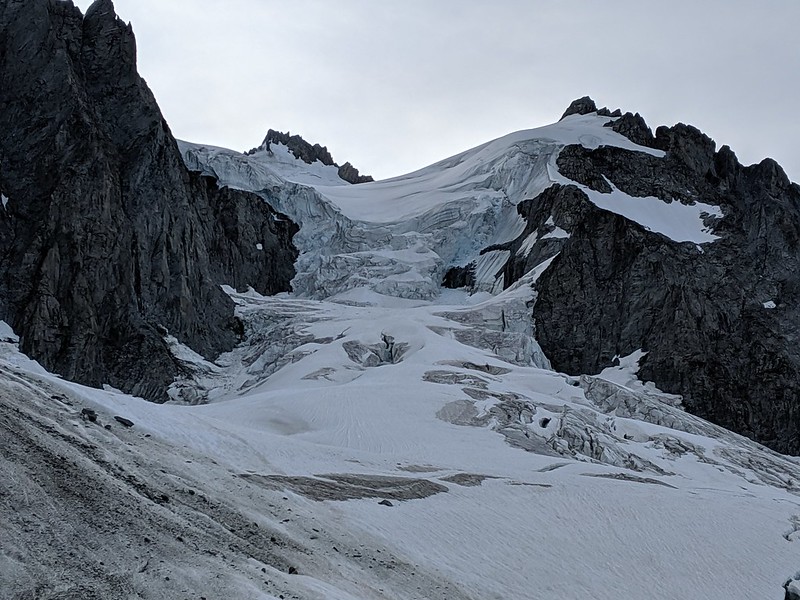 Pointe Isabella (the peak on the skyline half-right; the one half-left, apparently lower but actually a bit higher, is the Aiguille du Triolet). Go up the glacier, take the snow-ramp to the R before the ice-fall, get over the icy bit and take the snow ridge (not seen) to the visible snow ridge, leave that to the R for the rock ridge (excellent views of the ice-fall) and then you're on the near-summit ice slopes. Though if you're us you've got to 3650 m at noon, and prudently decide to turn around cos bad weather is forecast.

But the Graun's assertion that everything is falling apart is dubious, I think. The ice is retreating, yes, of course. But there are still acres of good granite to climb on. Here's some of it - there was so much I didn't bother to take proper pix. This is on the way from Cosmiques (Aig Midi on the skyline) to Torino. 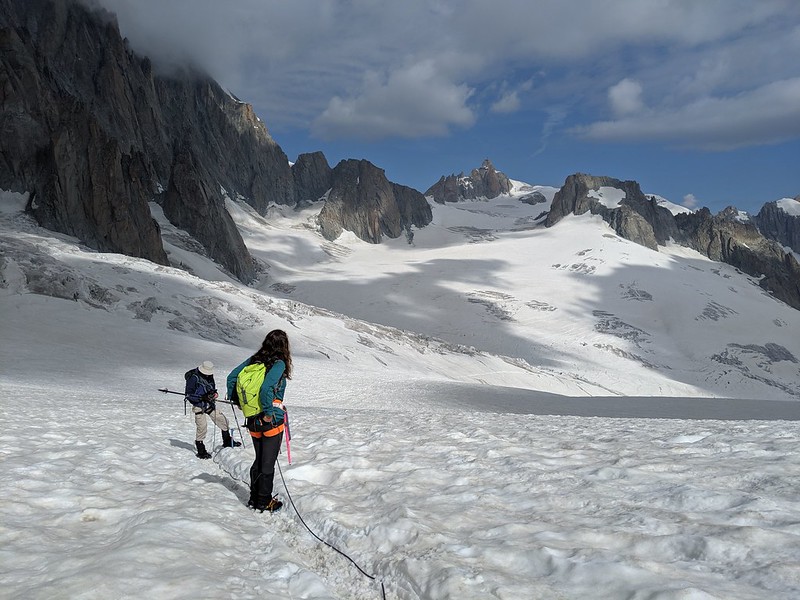 Yes, this post was just a thinly-disguised excuse for some holiday snaps.

Granite? Are you sure? Might be but most of the western alps are metamorphic rocks. The shapes of the erosion, hence the peaks, suggests the latter.

Granite is what everyone calls it - example - and to my non-geologist self it looks pretty granite-y: big slabs and blocks and spikes of well-weathered but sharp rock. Like I say, I didn't (alas, in retrospect) take any of the obvious exemplars (the E face of Midi; and many of the peaks on the way from Cosmiques to Torino were ones I saw). Here is an example of some rocks that look like granite to me (these are Aig du Tour).

And everyone is wrong.

This is a common failing. North of here issue Steptoe Butte, the geological exemplar of an older rock formation protruding through newer formations. There is a sign at the top proclaiming this to be granite. It is plainly, obviously quartzite. A local geologist explained to me that the road department only knows basalt. If it's not basalt it must be granite.

So, granite is light gray, to pink, when viewed from a distance. The matrix is feldspar, the major inclusions are quartz, clear, and then various other minerals may be present, magnetite, mica ...

Your pix is of dark rock without quartz inclusions. I opine that it is not granite.

So the helicopter resurfacing... How does that fit into the accepted story, given that there weren't many helicopters until the 1950s?

I was perhaps too casual in my comment. The bits of (something) that could be a light plane or helicopter are there; they could be from the 50s or 60s; but whether they were ever buried of course I don't actually know.