We, in Some Strange Power's Employ, Move on a Rigorous Line 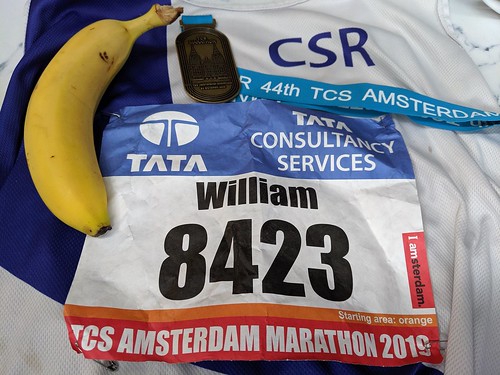 Here as an update for my records is all my marathons, in order:

For unclear reasons those records show that Rotterdam is unlucky for me. For this race I'd done minimal training - only one half since the spring - and my chief aim was to get round the course, ideally in under four hours, without breaking myself. This happened so I'm happy.

In the large the course was similar to previous years - start and finish at the old Olympic stadium, wiggle through town a bit, go out and back on the river for a long bit; then back through newish bits in the SE, and then back through the Vondelpark. But different in detail; I don't think I went out through the Vondelpark last time. The river bit is nice running and burns off a pile of distance, 21 k comes not long after the turn. The only annoying thing was that towards the end of the first k from the start we all lost about half a minute - it felt like more - when a constriction in the route forced a blockage and we had to walk for a bit until past. That's the sort of thing the organisers should be able to foresee and prevent.

My cunning plan was to run 5:40 mins/km average, which is just-sub-4-hours, as 5:25 for the first half to gain a small cushion, and then fade towards 6-ish for the second half. This was because my usual plan of running too quickly was out, since I'd (a) done hardly any training since Rotterdam in the spring; and (b) my inclined-to-tear left calf was still a bit dodgy; and (c) my right knee was complaining a bit, possibly because I'd gone over a barrier in the dark on my cycle home a few weeks before. Anyway, for a miracle this all worked, although slightly upset by the loss of 30 seconds at the start: by 21.1 I was on 1:55; the 5:25 held to 26 k and beyond (if you ignore the +20 s at 26 k when I stopped for a wee). By 30 k the fade to 5:45 has become rather obvious but by that point my cushion has grown a bit and I can afford 6:00 for the rest, which may be possible. There was a certain amount of internal dialogue around the 32 k point where I tried to decide if I cared enough to keep to the pace, but fortunately my body came to the rescue of my weakling mind and proceeded to stay under 6 mostly, so all was well.

For the last 8 k I had a carefully calculated 1 minute margin, including the extra 0.2 above 42 k, and the extra 0.15 for the disparity between my watch distance and the official markers. Towards the last 2 k I was able to push on a little (my wife, daughter and brother in law were waiting to cheer at 1.5 to go, at the exit of the Vondelpark, and saw the slightly sprightlier version of me) and so pulled in another minute of margin, woot. Afterwards I was about as fine as you can be after a marathon, walked slowly out via medal and banana and water and energy drink, hopped over the barrier skipping baggage reclaim, and walked slowly back to Hoofdweg.

* the water stations are about every 5 km, and supply in order energy drink, water, sponges early on; with gels and pre-cut bananas later. I took 7 gels of my own and the water and sponges en route. The water in cups is more eco-friendly than bottles which are wasteful; I jogged through the first few then walked ~10 m past the half way to drink the water. Sponges are very nice.
* I went out on Eurostar - the ferry was full, heavens - which is fine; but I prefer the ferry. There's now a direct train a couple of times a day to Amsterdam. Rumour says no direct train back, but I don't care, as I got the ferry back as usual.
* As voodoo to appease my calves, I've taken to running in compression socks, which are a right pain to get on and off. In a fit of stupidity, I forgot to pack them, and so - choosing not to risk the anger of the gods - I bought another pair at the marathon expo. But practically the first thing that happened in the race was that the right sock fell down. Fortunately it's the left calf that tears, so the voodoo stayed strong.


* My so-called rival James barely managed to beat me by 5 minutes over an hour.
Posted by William M. Connolley at 9:53 pm