Wikipedia: the dim and distant history of NPOV 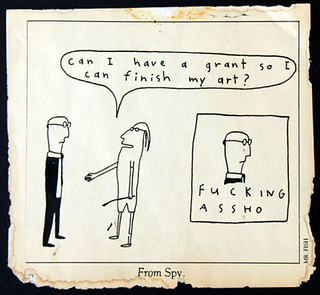 Someone asked me by email about the shifting history of NPOV on wiki; as is my wont, I'll answer by blog. For those not part of the in-crowd, that's Wikipedia:Neutral point of view:


All encyclopedic content on Wikipedia must be written from a neutral point of view (NPOV), which means representing fairly, proportionately, and, as far as possible, without editorial bias, all the significant views that have been published by reliable sources on a topic. NPOV is a fundamental principle of Wikipedia and of other Wikimedia projects. It is also one of Wikipedia's three core content policies; the other two are "Verifiability" and "No original research". These policies jointly determine the type and quality of material that is acceptable in Wikipedia articles, and, because they work in harmony, they should not be interpreted in isolation from one another. Editors are strongly encouraged to familiarize themselves with all three. This policy is non-negotiable, and the principles upon which it is based cannot be superseded by other policies or guidelines, nor by editor consensus.

So that's all very nice. How does it actually work?


One way of "dealing" with a difference of views is to simply write down the two opposing sides, perhaps in some sense doing so at length proportional to the weight (in vociferousness or reliability) of either side. There's a strong tendency for articles to veer in this direction, sometimes as a result of editorial compromise: you want this bit of text, I want that bit, let's put both in. But this he-said-she-said type of text doesn't work for the reader, and this has been policy for ages: Segregation of text or other content into different regions or subsections, based solely on the apparent POV of the content itself, may result in an unencyclopedic structure, such as a back-and-forth dialogue between proponents and opponents. It may also create an apparent hierarchy of fact where details in the main passage appear "true" and "undisputed", whereas other, segregated material is deemed "controversial", and therefore more likely to be false. Try to achieve a more neutral text by folding debates into the narrative, rather than isolating them into sections that ignore or fight against each other. So the answer is that ever since I've been aware of this, the idea is to have one unified text. The ultimate unversion of this is the POV-fork, where people attempt to have two independent articles presenting different viewpoints. This is forbidden, correctly.


The good book tells us that Neutrality requires that each article or other page in the mainspace fairly represent all significant viewpoints that have been published by reliable sources, in proportion to the prominence of each viewpoint in the published, reliable sources. In the case of global warming, this presents a problem for the nutters, because their views are almost invariably published in unreliable sources like blog posts (pttiiiing!!!) or drivel on the Heartland site or similar. So - and I'm going by memory here rather than tedious trawling back through diffs and long-archived talk pages - the "compromise" by the Forces of Good was to actually allow more "septic" content than was really warranted; since even a decade or more ago the scientific balance was at least 95% "pro" GW, the "anti" sections would have been very short indeed had we followed the "prominence" guideline, from a scientific point of view. There's a get-out, of course, in that we can also include political prominence, but then the septics tended to get sad when we write things like "of course it was politically controversial but they had no science to back up their politics".


All of this used to be dead exciting and it was a constant - chooses word carefully, who knows, people might quote me - struggle to keep content scientifically sane against the forces of unreason. I am not, of course, speaking only of my own efforts. But nowadays the Forces of Evil seem to have pretty well given up the fight; the height of their ambition appears to be to remove the dreaded D-word from  articles of no importance, and when their feeble efforts come to naught they simply slink away. This has had mostly good effects: people can get on with improving articles without worrying that some idiots will hack them up. Sometimes though the lack of stimulus leads to articles stagnating somewhat; I think that Attribution of recent climate change isn't as up to date as it could be, for example.


And how has this all evolved over time? This alas is a difficult question as I kept no notes and my memory is fallible. Per The dim and distant history of Global Warming on Wiki: Introduction, when I first arrived in 2003, things were very much Wild West and almost anything went, there wasn't even any 3RR, can you believe that? And when 3RR did turn up, it was very strictly 3R in 24h, which you could keep up for days; nowadays you'd get blocked for that.

I don't think the policies themselves evolved much (other than WP:BLP) but people's awareness of them did, and how much people used them in argument. Example: I was an active climatologist back then and Knew Stuff so quite often I'd simply write things into articles with no sources. Naughty me. But recall back in those days there were far fewer online sources. Over time, we attached sources to the words. My point of view was that truth was more important than exact sourcing, and in this I differed from policy. But I was always happy with the NPOV policy.

During the initial Wild West there was a tendency for articles to end up somewhat he-said-she-said, but this was always against policy; it's just we didn't know it, or know how to reach an acceptable compromise. Over time, this got flattened out; partly as newer editors came on board. And the gradual shift in tone of, say, the GW article reflects the change in science over the last ~2 decades: naturally, the "voice" has firmed up as things once tentative became clear. This you would expect. The appearance of successive IPCC reports were I think milestones in this process; they were exactly the kind of synthesis that wiki asks for (it prefers secondary sources to primary ones).


See here on my talk page for full - ahem - details; or see my blog post of the time, They make a wasteland and call it peace. As you'll notice, I wasn't happy with that: unthinking and stupid is a fair brief summary. But by then I already knew that Arbcomm collectively were idiots, like most committees, however intelligent they might be individually. But note that in terms of content it had little effect.


Not vapor, Yankee scum. The role of water vapour in GW is an interesting case in point. Septics like to say it is far more important than CO2. Sane people have been pointing out for ages that Water vapour is not the dominant greenhouse gas. But the problem was that (since this was f*ck*ng obvious to people of the meanest intelligence) no-one had bothered write it down in a scientific paper or other RS. Eventually (if I recall this right) Gavin actually did some work to quantify things; and now there are perfectly decent sources.


* NPOV Blues - 2004; promising title, but alas not informative.
* Firing and the Left by Bryan Caplan
Posted by William M. Connolley at 9:28 am

Was it inevitable that the he-said, she-said approach on the topic of climate change would over time be displaced by an approach whereby "pro-GW" content dominated climate change-related articles?

If I had asked you in 2005 or 2010, how confident would you have been that Wikipedia articles would ultimately clearly depict the mainstream scientific consensus on climate change and devote very little space to climate change denial rhetoric? Was there a serious risk that Wikipedia could have firmly adopted a "proponents of GW say X, skeptics of GW say Y" approach (which was common in the media at the time)?

The he-said-she-said stuff was always against policy, and so would inevitably be displaced as wiki got more "professional". By that I don't mean that more professional climatologists edited it, I mean that people with a more exact leaning to the rules came along; and as existing people became more aware of the rules; and learnt to write that way.

BTW, don't let me give the impression that it was all HSSS in the early days; it was but a tendency.

The change to "pro GW" was inevitable, given the gradual firming up of the science in that direction, as best exemplified by the increasing confidence of successive IPCC reports. The early "skeptic" stuff was largely FUD; as the light shone in, it mostly just evaporated.

As to what I'd have said in 2005, I don't think that is an answerable question.