The dim and distant history of Global Warming on Usenet 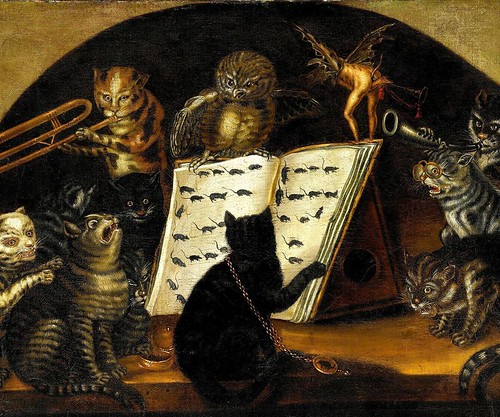 Once upon a time, before blogs and wiki and even before the web, there was Usenet; and on Usenet there was sci.environment. This was a loooong time ago. Punting back through Google Groups I can find stuff going back to the unimaginably distant past of 1994. Here's a link to it. My recollection is that Usenet groups were not archived; disk space was scarce in those days, and anyway Usenet was for discussion; why would you bother archive it? Things that needed archiving were kept elsewhere; for example, every now and again Robert Parson would post a link to the Ozone FAQ. Dejanews began archiving in 1995; and later got bought out by Google, which accounts for the beginnings I now see.

I turned up somewhat earlier, but I cannot now recall how early; certainly, after I joined BAs in 1990. Almost the first thing I saw was the classic "what do you mean 'we', white man?" joke, immeadiately followed in true welcome-to-Usenet style by some fool misunderstanding it and getting all huffy.

The great virtue of Usenet was that no-one owned it and anyone could post. The great vice of Usenet was that no-one owned it and so anyone could post1. My recollection is that things got worse, particularly as internet access became more common and more fools came online, but that may just me believing in the Age of Gold, which you shouldn't, except for exceptional cases. Nonetheless, it did do away with tedious arguments about comment censorship on blogs, and I did sometimes advise people to post there during the period they ran in parallel; I gave up Usenet in 2006.

The cast of characters in those days was rather different. When I turned up folks like Robert Grumbine, Michael Tobis were already there, and now I look at early 2005 so were Raymond Pierrehumbert, Len Evens, Carlo Izzo, Robert Parson, Rich Puchalsky, John McCarthy, Jan Schloerer, Dean Myerson, David B. Benson, Paul Farrar, Carl J Lydick, James Annan, Ian St. John, David Ball, Coby Beck, Lloyd Parker, FerdiEgb, Roger Coppock, Eric Swanson, Steve Schulin, Scott Nudds, Bruce Hamilton, Thomas Palm, H. E. Taylor, Steinn Sigurdsson, Alastair McDonald, Peter Hearnden, James B. Shearer, Josh Halpern and probably many others who I have rudely forgotten, but those are all names I recall, somewhat vaguely, and could probably divide roughly into "good", "bad" and "squonk", which latter class I've just had to invent; if it helps, JMC is put into it. For these were early days, the science of GW was unclear (do not believe the fools that tell you we knew it all in 1960, or 1970, or 1980...), most of that science was not on the web (because the web didn't exist; recall that Netscape was formed in 1994) but was "hidden" in hard to access libraries; even the 1990 IPCC report wasn't widely available. "Yeah, GW might be a thing, but I am unconvinced" wasn't an unreasonable position, for anyone unfamiliar with the science. The unambiguously "bad" were a small minority.

So quite a lot of the conversation was noobs asking noob questions and getting polite and useful replies. The rest of it, apart from pure noise, was the usual kind of global warming wars. Over time, it became obvious that something more consolidated and buildable was more useful for the general-questions aspect; Wikipedia came to fill that role.

There was also sci.geo.meteorology, which was more science-like, as you'd hope, and thus lower traffic, as you'd expect. For example, someone in 1995 asked for the BAS website, and I pointed them to our FTP, which had GTS data. There was also talk.environment, but that was even noisier than sci., and I think I ignored it.

What did we talk about? The earliest thread I can find is about what would a zero CO2 world be like? JMC wanted to tell us why we should postpone coming to a steady state in population, energy use, and flow of materials for 50 or 100 years. Hugh Easton got in early on that perennial favourite, Will polar ice melt more quickly than previously thought? There was a kinda thread on can-forcing-produce-negative-output but it didn't go terribly well. We even did solar cycle length and solar forcing; but that was before Damon and Laut.

Well, that will do. On the whole, I didn't find wading through the past particularly enlightening.

1. Late on - 2006, I see - "we" created a moderated group, see James' Announcing: Moderated global change discussion forum, and at one point JA discouraged comments at his own blog, in favour of responses there, if I recall correctly (I can find one instance of me doing similar). As a noble attempt to deal with the S/N ratio problem on sci.env, without being subject to the whim of one person's moderation, it was a bold endeavor, but I believe it failed.

You missed the best years of Usenet. I started reading about 1983, and first posted in about 1985. I'm not aware of any archives that cover the very early years...

There was also a loosely defined "climate bloggers" google group (Planet 3.0) that Michael Tobis organized, that seemed to run from 2009 to 2012.

Didn't look at the conversations.

Definitely not the *most* diverse group, but probably reflected the narrow footprint on the ground at the time...

P3 would belong in the "climate blogging" history, https://wmconnolley.wordpress.com/2014/11/30/the-dim-and-distant-history-of-climate-blogging/. Except it isn't quite dim and distant enough, in 2009.

"For these were early days, the science of GW was unclear"

These days the science of natural variability, a la El Nino/La Nina, is still under intense study, and nothing is truly resolved.

There's a big difference between "under intense study" and "nothing is truly resolved" and "unclear".

In the early days, there were lots of huge holes - e.g. the MSU satellite series; and the temperature record itself is now 30 years longer than it was in 1990. Those huge holes are filled in. Yes GW (and El Nino) are still under intense study, but many things are resolved. It isn't clear to me that there are any major things that need resolution at this point (e.g. we don't know the exact value of climate sensitivity, but meh); the interesting problems are economic or biological, not in terms of the physical climate response.

A lot of disciplines took well until the 20th century to get organized, and modern "Climate Science" " is now roughly twice as old as it was three or four decades ago.

While "Nobody Knows" questions tend to get answered in the long run some ,answering interdisciplinary ones, like the value of climate sensitivity, may require resolving not one, but many known unknowns, which can, and often does take decades.

Are you dissing Sou?

I don't like sous vide , but l'd never diss a Watts rotisserie

Wasn't there an archive at UTZoo? Henry Spencer, as I recall, had a lot of reels of mag tape.

I remember those days. I stopped following Usenet and sci.environment probably in the late 90s. Took about 10 years off before starting to follow blogs.

Jan Schloerer regularly posted a climate FAQ, and it can still be found at faqs.org. It mentions a name or two you've forgotten.

Robert Grumbine also posted a sea ice FAQ back in those days. He moved over to the blog side, but he hasn't posted anything on his blog in a couple of years. Out of that group, he was the only one I met face-to-face, when I was in the D.C area on business.

There were a few cranks, but nothing like today's blogosphere.

Ah yes thanks for that reminder. Yes that's right there was a climate FAQ, but it only covered the generally-uncontroversial (though they would be controversial, to today's nutters) basics and avoided AGW. And the sea ice FAQ too...

Sadly you would have lost that bet...

That's right, if the bet was to last until December. Sadly, no-one was brave enough to take me up on it, so we didn't set any exact terms.