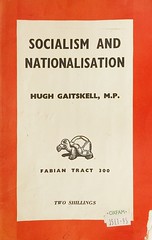 The price of carbon in Europe has soared to a fresh record high near €38 a tonne, with prices adding more than 13 per cent over the past two sessions as traders rushed to secure supplies of EU emissions allowances says the FT. That the price is rising towards something plausible is good; that this is happening for trading reasons is not so great. This illustrates the problem with permit trading as against a nice simple carbon tax: the system is a boondoggle for traders and speculators. Which is one of the reasons that the EU prefers it.
As a good free marketeer I am of course happy with speculative trading in general; but I think I disapprove of govts deliberately creating such markets, where the price - as the FT makes clear - depends less on real world fundamentals than the political whims of the EU.

I can see why setting the tax to equal the damage caused by the emissions might result in the optimal amount of emissions in some cases. I doubt if it is true in the general case. I claim that CO2 and climate change isn’t one of those cases.

What is the correct tax rate if emissions and thus the cost of emission are cumulative? Suppose that the current cost of releasing X pollution is function of the total release of X in the past. For a small past release, the pollution cost is small or even negative, and the net cost-benefit for all uses might be positive. For a large past release, the pollution cost is large, and the cost-benefit for all uses might be negative. In the latter case, the tax rate should be so high as to prohibit use. In the former case, the tax rate might be set to match the cost of emissions over some future period of time discounted at some rate, or maybe something else. This calculation is very sensitive to both unknown future emissions and to the chosen discount rate. How do you set one constant tax rate when the cost is cumulative, and thus increases with time? I don’t see how you could, so it seems to me that the tax rate would at minimum need to increase with time. I also don’t see how to get an optimal increase of the tax with time, a much more complex problem. If we pick too long of time period to estimate costs over, the early lower or even negative cost emissions might be taxed at rates that are clearly too high. If we pick too short of time period, or too low of discount rate, we might well overshoot the ‘optimal’ point of stopping releases.

The problem is somewhat worse as the harm from climate change is in some cases delayed. Similar in impact to cumulative, but different. For example, we have probably warmed the climate enough to melt Greenland’s ice cap, but it will take likely thousand of years or more before it melts, if we stop warming the climate.

Non-linear matters a lot if there are significant discontinuities in the climate or in the harm caused by climate change.

> If traders and speculators are buying now, they expect to sell at a higher price later.

Not forgetting those who actually intend to use the permits, who will not be selling.

> And by signaling the future price rise, the market gets more efficient.

Indeed; that's an argument for trading; although as an argument for the market, it is circular: we should have a market so we can have traders so the market will be more efficient. The problem is also "efficient at what?". The fundamentals of CO2, would be good. Kremlinology, not good. And don't forget that the permits react to the market.

Both CO2 taxes and markets have a "Kremlinology" problem.

We don't know the future. The carbon price, set by market or by taxation will likely need to be adjusted as we learn more, so how and when is this decision made?

The tax rate would change after a political process as we learn more, if so how and when would that decision be made?

Or the permitted amount of CO2 may well need to be adjusted as we learn more, so how and when is this decision made?

The markets might be better at this, as the types of anticipation are different. In the case of the market, the price would rise or fall when it was looking likely that an adjustment would be needed. The actual adjustment might not be much of a real event. The price has already gone up, the use of carbon fuels has already started to decline. Markets look ahead, sometimes fairly well.

In the case of a tax, the incentive is to avoid the tax by producing high release products before the tax increase, exactly what isn't needed.

The market might be more efficient than the tax.