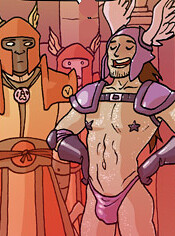 People routinely spout nonsense, but are somewhat more reluctant to dribble actual money away. So offering to bet against people spouting nonsense - aka put-up-or-shut-up - has some plausibility. It isn't perfect - I might have a lot of money and very poor judgement; but then again, people with very poor judgement do tend to lose their money fairly quickly. Or, some words from 2006.

And so when the Arctic sea ice was low in 2007 and the usual doom-mongers said the usual things, I offered to bet that there wouldn't be a new record in 2008. Inevitably, the actual doom-mongers wouldn't pony up but some brave souls did. I won. And offered to bet that there will be more ice in 2009 than in 2007 (this may all have been inspired by James Annan's earlier bet in 2005; don't miss Lindzen wimping out. But then there was my post from early 2005).

[And by complete co-incidence, Big Gav writes Don’t climate bet against the house at RC.]

I got some takers for the 2008-9 season, and won that too (with, technically, a marginal loss to RMG on a slightly different bet, but that wasn't for cold hard cash so didn't count).

For 2009-10, it looks like people had got tired of being prepared to bet on a new minimum, so I decided that my "default" prediction was a linear trend, with a "buffer" around it. And the result was... no-one won, since the result was inside the buffer, i.e. on-trend.

By this point it was kinda painfully obvious that neither the gloom-mongers nor the denialists were prepared to bet on ridiculously high or low ice levels, and the negotiations on terms were becoming ever more intricate. Which revealed something, if you knew how to think, so could be considered a success.

At this point it starts to get blurred and I cannot be bothered to tie all the pieces together. In 2011 there were multiple bets going, covering multiple years; after all, just one year is a casino.  2012 was a new record low, so I lost a couple of bets. But in 2014 a couple if the multi-year bets with Crandles came in my favour; and another in 2015.

But more excitingly, also in 2011, I bet Rob Dekker $10k on seaice-to-2016; that being a five-year trend which might be more meaningful; five years was a compromise: climatologically quite short, but within the span of human interest. In order for us both to preserve our... sanity?... we agreed on a wide-ish dead zone: If both NSIDC and IARC-JAXA September 2016 monthly average sea ice extent report are above 4.80 million km^2, RD pays WMC US$ 10,000. If both are below 3.10 million km^2, WMC pays RD US$ 10,000. In all other cases the bet is null and void. Alas, in the end the result was a draw.

I think things mostly petered out then. In later 2007, Joe Romm was prepared to bet on "an essentially ice free Arctic by 2020". He ended up losing that one, obvs, but 13 years is a long time and his email address no longer works. If you know him, let him know he owes me $333.

Caveat: all this was a long time ago. Links have rotted, as has my memory, so very likely I have missed stuff.

1. In the middle of the first sea-ice bet, in May 2008, there was some nonsense about predicting cooling, but I don't think anything came of it.

* Arch of the IInternetArchive of the Romm post.
* More Wadhams.
* Who is the farting three-legged dog in this scenario, you ask?
* Probably not betting on climate with Lubos Motl

* If the aspiration is, as leaders of all stripes have said, to “lower the temperature,” we do not need simply calmer politics or different politics. We need less politics.

As 8 decades of the 21st century remain, who wants to bet that nobody at the UN steps forward to bet on temperatures rising 3/8 C between now and Jan . 2031, as needed to keep the Sec Gen's playbook in play ?

Not entirely a co-incidence :-)