Recent considerations in Roe vs Wade 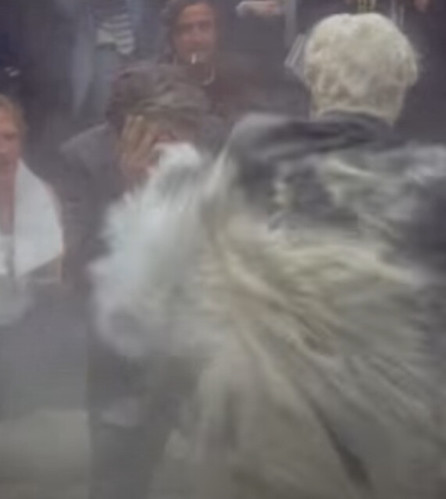 The recent events require no introduction. I maintain what I said before, though I think it likely they will uphold the precedent now looks likely to prove unprescient.
That the dispute is bad-tempered and irreconcilable is itself uncontroversial, but in case you think otherwise, here are some words from the Graun and elsewhere: Samuel Alito has provoked an astonishing outpouring of jarring adjectives this week. “Appalling and heinous” – Vanity Fair; “acidic and extreme” – Slate; “dreadful and repugnant” – the Washington Post; “scathing and dismissive” – Los Angeles Times... will eviscerate federal abortion rights in America... Alito’s attack was so brutal and direct it still left many dumbstruck... Alito will forever be known as the supreme court justice who destroyed a woman’s right to control her own body and who set the US on a regressive course pointing back to the 17th century. I've only provided one side there; but I presume you don't doubt that the other side is just as certain of its fundamental rightness.

Side note: people often say, as the Graun does above, that repealling RvW would destroy "a woman’s right to control her own body". But the RvW judgement explicitly states that "For the stage subsequent to approximately the end of the first trimester, the State, in promoting its interest in the health of the mother, may, if it chooses, regulate the abortion procedure in ways that are reasonably related to maternal health". So RvW does the very thing that people rage about. FWIW, I find this part spurious: it is, or should be, clear that the mother's interest in her own health is higher than that of the state, and therefore the state cannot have any right to legislate, on health grounds, over her interests. But I rather suspect that few would be prepared to accept this obvious point as a general principle. Rather, the only plausible balance to be considered is between rights of the individual and the unborn-right-to-life. No, I am not going to say what I think that balance should be, because why would you care?

Reading Roe v. Wade Is a Bad Decision That Ought to Stand I find "Legal authorities broadly agree on Roe’s constitutional defects... Roe can’t be repaired, much less thrown out, without doing more constitutional harm. For the sake of good governance, the court’s conservatives should rediscover deference to long-established precedent, and leave this rash and wrongly decided law alone". I am sympathetic to this and almost agree, but I also find the argument that it was wrongly decided persuasive. More importantly, I think that it should be decided by politics... perferrably by a generic constitutional item along the lines of "the state shouldn't do things it has no need to do". Again, this unobjectionable point is a principle that few would sign up to when made general.

Alito's leaked draft1 refers to the history of abortion law; and people have disgreed with his interpretation. If you're sufficiently originalist this might matter, but I'm not, so I think I can simply not care about that aspect unduly.

I return to the point of the democratic system: to provide a means for resolving these conflicts, where we've agreed they are irreconcilable. One amelioration, per Sumpers, is people will accept decisions they disagree with as long as they accept the legitimacy of the decision-making process. Which is of course why so much political speech is devoted to making you think the process is unfair. So we learn that leaving these decisions with the Supremes will lead to what we observe: people doing their best to delegitimise the court, which is bad. It would I think be more acceptable if done by state governments: then at least you can say: if you don't like it, vote against it, or move.

Another advantage of deciding at state level is that we have a natural experiment: what happens if <thing X> is banned in some places and permitted in others? We know we are not all-wise; it is good to allow experiment, in moderation.

Another, partisan, advantage, if you're a Dem, is that this would surely lead to more votes for Dems in upcoming elections. That's a fairly important point, and one that in the heat and dust I don't see emphasised as much as it should be.

Finally, I see this - and similar - as symptoms of our water-fatness. We really are so rich, considered as a society as a whole, that we can afford to waste vast quantities of highly paid people's time on this stuff. This makes idiots like Putin think the Cold West is decadent so he can invade Ukraine; but what he missed was the bit about us being so rich.

As so often, a chance by-way provides a far more insightful comment than all the fluff: from Volokh, a review, making the point that there is a deficiency of the conservative legal movement: namely, its exclusive focus on the law "as it is" at the expense of the underlying abstract normative principles that justify the positive law of our written Constitution. This reminds us that even if you "believe" in the constitution, you should not treat it as holy writ, but grounded in "underlying abstract normative principles". But note that doesn't give you leave to simply write what you like into it, or ignore any bits you don't like. Interestingly, the underlying article refs Bostock.

1. 2022/06/24: the final decision is now released. Obama doesn't like it, but underneath the flowery words look for the contradictions. the freedom enshrined in the Fourteenth Amendment of the Constitution requires all of us to enjoy a sphere of our lives that isn’t subject to meddling from the state — a sphere that includes personal decisions involving who we sleep with, who we marry, whether or not to use contraception, and whether or not to bear children sounds great, but then our freedoms are not unlimited — society has a compelling interest in other circumstances, for example, in protecting children from abuse or people from self-harm. Asserting that we aren't free to self-harm sounds arbitrary to me; Obama is happy for the state to intervene whenever he wants to, but not when he doesn't. There's no principle; it's just case-by-case whatever he feels like.

* Via JM on Twatter, a paper The New Abortion Battleground that goes on endlessly about possible legal complications of inter-state juristictional fights. Not very useful, because it comes to no conclusions, other than to show that many things are possible.

* Are we living in a land Where sex and horror are the new Gods?

* America’s Supreme Court faces a crisis of legitimacy says the Economist, worrying that "Nine berobed judges striking down laws approved by elected politicians poses a “countermajoritarian difficulty”" - ah, so they are in favour of striking down RvW, one assume?

* The Case for Ending the Supreme Court as We Know It by Keeanga-Yamahtta Taylor in the New Yorker. A long whinge, I include it for the brevity and fatuousness of it's attempts to think of what else you might do.

* Someone else (Paul Kahn as it happens) tries to discuss whether the constitution or reading thereof should get priority over precedent. But the discussion is unilluminating, since it has clearly been written to support the predetermined answer. Precedent can be overruled, it decides (anyone who dislikes Dredd Scott has no alternative answer) but the reasoning doesn't really help: The case law is working out the meaning of the principles by which we live. As those principles develop, some past decisions will look like missteps. But it does at least note the conflict between common law and constitution.

* More on the Dangers of Price Controls - CH.

* Bryan Caplan: The Putin and the Pea.

* More of me on RvW and RBG: http://wmconnolley.blogspot.com/2020/09/ruth-bader-ginsburg-died-on-september.html

* Misinformation About Misinformation - Bryan Caplan. Makes some of the same points I have. "Blaming listeners for their epistemic vices sounds bad. It makes the accuser sound elitist, if not arrogant. Blaming a few high-status liars for the world’s problems is a lot more compatible with Social Desirability Bias than blaming billions of low-status fools who fail to choose to exercise their common sense". Volokh comments and points to demand-side problems.

* Justice Samuel Alito’s draft opinion overruling Roe v Wade insists that it endangers no rights other than abortion, but this disclaimer follows pages of reasoning that suggest the opposite - the Economist.

* There Is a Reason Why Roe v. Wade's Defenders Focus on Its Results Rather Than Its Logic

What says the supremes are the only group deciding what s “constitutional”?
They just Made That Up.

The reason why this was leaked now was to limit the election impact.