Why does the Evil Empire want to be paid in roubles? 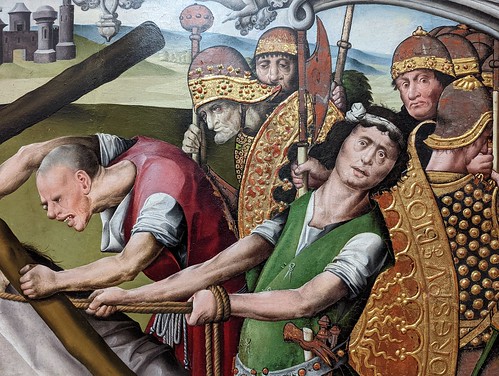 Time for another post, before people start worrying about my health. If you want to read something very stupid indeed, you can read Why is Vladimir Putin demanding Russian gas is paid for in roubles? in, you guessed it, the Graun. Timmy says the obvious. My only answer is that you have to pay in roubles, but at a stupid made-up exchange rate. Tenuously related, my Gas excitement from 2006.
Other than that, my best hope from The Evil Empire strikes seem to be realised. And as a bonus, that thing that almost never happens, is happening: the evil doing badly in just retribution for their evil. A hopeful omen.
My picture is The Road to Calvary (full pic), which has no relevance other than me seeing it at the Fitzwilliam. Although in some ways striking it is a clear rip-off of Bosch, and the painters have somehow lost inspiration for variety in the faces.
Speaking of my health, it looks like 7:35.3 is my 2k for the season, though I may hope to improve it later. 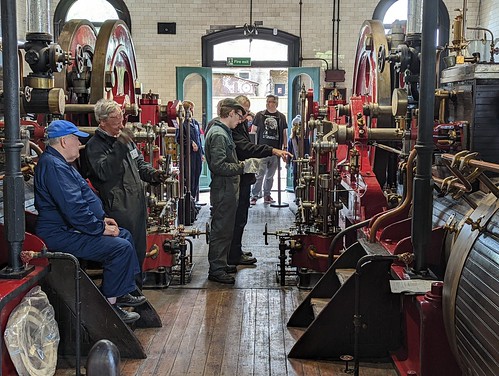 In other local news, the Museum of Technology was running its engines this bank holiday weekend. This pic shows the chimney (right, by the river, with smoke blowing right); in the middle the old gasometers, now long gone; our new house is in the empty patch of land on the right by the river bank as it runs downstream out of the picture.

* On Protectionism and the Dignity of Protected Workers (see-also Bryan Caplan on government employment).
* Feeling Around for Something Human  Why do Russians support the war against Ukraine? Shura Burtin investigates.
Posted by William M. Connolley at 7:56 pm

Oops: fixed (that was for the gasometer one).

Rubles are a distraction.

Well, he wants to get something out of threatening, whilst being uneasily aware that if he actually does it, it merely speeds up our weaning ourselves off the stuff (and who knows it might even provoke the idiot Krauts into not shutting down their nukes).

And yet, the EU are wittering that paying in roubles would break the sanctions. Which makes no sense to me. So I'd still like to see an explanation for this. Fortune kinda implies that it would be a way around sanctions; which seems weird; surely it is the payment itself that matters, not the currency.

If you are forbidden to buy roubles how could you pay for gas in roubles. To buy roubles implies a sanctions'-evading ploy unless you could prove that those roubles were paid to you before the sanctions were imposed. The levels of sanctions and exports to Russia make that questionable, at least

Hmm, I think your letter may have been overtaken by the times; Ukraine is doing better than that now and we seem to be ever more on their side.

Your picture shows bling that Trump would be proud of. I bet he'd love those flunkies too.

Would that it stays so, but occupying half a country is still about four times easier than a whole one.

The blinding blingature proudly displayed in Trumps tower apartment came from a Bagration palace in Georgia.

Ha. Bagration. I've reading War+Peace and he's just had a great banquet in his honour, because they are trying to pretend that Austerlitz didn't happen. That turns out to not work so well.

Wasn't that changed to: