Whilst browsing the wilder shores of skepticism (well, I'd just been to Ikea and needed some light relief...) I came across the inaccurately titled "Reality in Arctic temperature trends. Scroll down about 1/4 of the way to the 1880-2004 temperature plot. So... temperatures higher in 1935-1945 than now? Interesting! And using CRU data too. How come... Well, one funny thing is that he calls this "A sobering dose of reality" - presumably forgetting that elsewhere he has attacked the Jones data as the spawn of the Devil. A second funny thing is that he is using [70,90]... [60,90] is more usual. Would you get the same results for [60,90]? And are there really many stations between [70,90] in the early period? 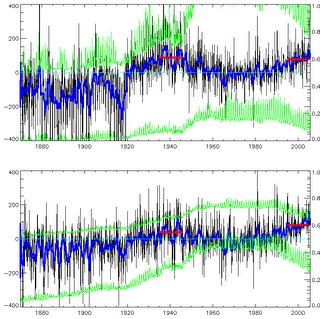 But... look at the green lines. The lower green line on each plot is the fraction of the area covered by obs, on the right-hand scale. So for [60,90] about 40% of the area is observed, since 1960. In the 1940's, about 30%. For [70,90] about 20% is observed, recently (though with a huge annual cycle: far more people about in summer!) and less than 10% in the 1940's. Our septic complains that the "Arctic Climate Impact Assessment (ACIA) start their temperature records in 1960". Errm yes, well that might well be a good idea. Perhaps the ACIA people actually bothered to look at the data rather than just area-averaging it.

In fact, to my not-great-surprise, the ACIA people do indeed look at temperatures before 1960 (hint: if a septic sez something is true, its probably false...) and even draw nice maps of the trends at various time intervals: see the ACIA sci report, p36 and after. But they note the data sparsity problems early on. 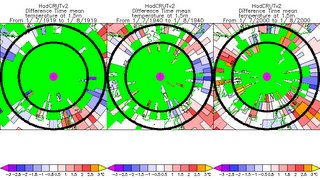 So... what do we learn from all this (apart from never trust the septics, but we knew that already)? We learn that plucking a dataset off the shelf and playing with it and only showing the end result may well mislead... we learn that you should be cautious with sparse data.
Posted by William M. Connolley at 9:20 pm

I am surprised that there are essentially no measurements inward of 70. I would have thought that the US and Russian (nee Soviet) navies would have spotted the place with automatic stations.

Eli - Keeping an AWS working above 70S was probably pretty tricky in the old days. Easier now; but probably the answer is that the actual temperature wasn't so important to the military: they were far more interested in submarines under the ice.

I would not bet against there being several sets of records south of the Potomac near Washington and somewhere near Moscow. Getting this stuff out from under various security blankets would be tough, but worthwhile.

Of course William, if you're desperate for warming then why not include those nice Siberian weather stations whose anomalous warming has abosutely nothing to do with the fact that they are near growing towns and cities?

"60-90 is more usual" - I must add that to my list of weasel expressions for cherry picking.

John A - as a comment on my analysis, that was pathetic. Come on, have you nothing to say? In which case, why not say nothing?

You present diagrams of the data showing sparsity of observations but no discussion of the known problems of including problematical data points such as the set of Siberian stations between 60 and 70N which show anomalous warming?

Like your friend Mann, you're playing a shell game. In Mann's case it's "watch the bristlecone pines", and in yours its "watch the Siberian stations with their known large UHI errors and the systematic errors in most Arctic Russian towns caused by the reporting of lower temperatures during the Soviet era so that they'd receive more fuel and food from the Kremlin"

Presenting diagrams without provenance and ruminating about "the wilder shores of skepticism" does not an analysis make.

Perhaps you'll revert to your favoured tactic of verbally yawning and stretching, having some of your acolytes believe in your intellectual prowess that is so taxing that you can barely keep your eyes open while responding to the pinpricks of those Lilliputian skeptics.

"Well I suppose I'd better do something, shall I go for overweening arrogance or just feigned boredom and trivialisation?"

"It's landed on its edge! Again! What are the chances?"

John A: O woe is me! Connelley's reaching coffee jar and this time its not the decaf! My doom is nigh!

For an actual peer-reviewed article on Arctic temperatures see:

John A: " Of course William, if you're desperate for warming then why not include those nice Siberian weather stations whose anomalous warming has abosutely nothing to do with the fact that they are near growing towns and cities?"

Can you give some examples of Siberian weather stations [b]north of 60 degrees[/b] that are warming anomalously due to the fact that they are near growing towns and cities? Your link didn't provide any.