Yes, back to the familiar old topic: bashing science coverage in the papers. This time that old lefty favourite, the Grauniad, which has an article on Sea level rise doubles in 150 years. Who have discovered that Global warming is doubling the rate of sea level rise around the world... The oceans will rise nearly half a metre by the end of the century... Scientists believe the acceleration is caused mainly by... fossil fuel burning... during the past 5,000 years, sea levels rose at a rate of around 1mm each year, caused largely by the residual melting of icesheets from the previous ice age. But in the past 150 years, data from tide gauges and satellites show sea levels are rising at 2mm a year.

To which the obvious reply is "is this supposed to be news"? Slightly garbled of course (satellites say 3mm/y; the longer time tide gauge record is ~2 m/y; see the wiki [[Sea Level Rise]] page and the refs to the IPCC therein). The other interesting bit of garbling is the 1mm/y over the last 5kyr... the TAR says Based on geological data, global average sea level may have risen at an average rate of about 0.5 mm/yr over the last 6,000 years and at an average rate of 0.1 to 0.2 mm/yr over the last 3,000 years. So, *if* they haven't garbled it, they story is that the folk from Rutgers University have upped the estimates of SRL over the last 5kyr. But I'd bet on garbling myself. The abstract from Science is here but I can't read the full contents (I had an offer of a subs for $99/y and am considering taking it up...) but it seems to be more interested in the Myr timescale.

The Grauniad also covers the latest EPICA stuff, but thats much better covered over at RC so you should go there for that. 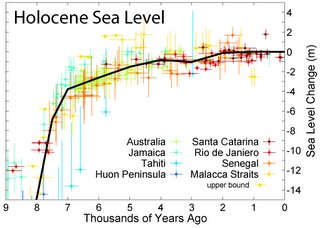 [Update: thanks to the kindness of not one but two readers, I now have a copy of the article from Science. In true blog style, I've quickly skimmed it far enough to discover that the 1 mm/y over the last 5kyr is a bit of a sideshow, and fortunately for you, its in the supplementary online material freely available. They say "Sealevel rise slowed at about 7 to 6 ka (fig. S1). Some regions experienced a mid-Holocene sealevel high at 5 ka, but we show that global sea level has risen at È1 mm/year over the past 5 to 6 ky." So I must apologise to the Grauniad: no garbling.

So how do we reconcile that to the pic I show (which is from wiki, not the Miller paper)? Both show a rise of about 15m over the last 8 kyr. The wiki pic has that very steep (15 to 4-) from 8 to 7 kyr; then much shallower. The Miller article fig S1 starts a bit deeper and has a much more uniform slope. Since the Miller data is almost entirely from one area and appears to contradict what I think I already know, I'll stick with wiki and the TAR for now. But informed comment is welcome. I do find it a teensy bit surprising that the Miller paper doesn't comment on the discrepancy between their Holocene results and "accepted wisdom": its possible I have the AW wrong.

Update 2 (minor): switch href on the figure to the wiki page]
Posted by William M. Connolley at 6:27 pm