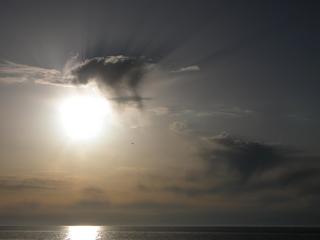 Our glorious leader has been saying things about the politics of climate change again, which have been generally interpreted as weakening of Kyoto-type stuff. See the Grauniad. In fact he has been talking mostly about post-Kyoto (ie post 2012) so in some ways the question must be: why should he bother? He will be well out of it by then. BTW, I've ventured to spice this post up with a nice picture of a cloud from the Pictures blog by way of advertising.

He said when the Kyoto protocol expires in 2012, the world would need a more sensitive framework for tackling global warming. "People fear some external force is going to impose some internal target on you ... to restrict your economic growth," he said. "I think in the world after 2012 we need to find a better, more sensitive set of mechanisms to deal with this problem." His words come in the build-up to UN talks in Montreal this month on how to combat global warming after Kyoto. "The blunt truth about the politics of climate change is that no country will want to sacrifice its economy in order to meet this challenge," he said.

Well, so far so politics so who cares? FOE do (different article):

Tony Juniper, director of Friends of the Earth, said: "We need to understand immediately what he means by that. His role at the moment is pivotal. He's the only world leader who's pushing climate change as an issue that has to be dealt with. So what he says is going to carry particular weight and he's basically just rewritten the history of climate change politics."

First of all, the request for clarification is unlikely to be met: ambiguity is what is being aimed for. Second, if TB really is "the only world leader who's pushing climate change" then nothing will be done: one against so many obviously won't work. Third I don't understand the re-writing bit: this is future not past.

Mr Blair has been seen as a strong supporter of the Kyoto protocol and was thought to be keen on working towards finding a successor to the treaty... As part of his support, the prime minister made tackling climate change his priority for the presidency of G8 and the EU this year, describing it as a greater threat to the world than terrorism.

Terrorism: did he? I thought that was Bob May. Although since terrorism kills so few people ranking X above terrorism as a threat hardly says much about the importance of X. Anyway, this now lines up a possible explanation, that Blair is angling to lead the post-Kyoto organisation in retirement from being PM. Farfeteched perhaps. Anyway, although Blur has been seen as a Kyoto supporter, thats mostly rhetoric and practical action is thin (Stoat passim). Nothing came out of G8 (Stoat passim). We (the UK) have Kyoto targets that look unattainable and voluntary additional targets (reaffirmed in the last election) that look even less attainable.
Posted by William M. Connolley at 10:23 pm