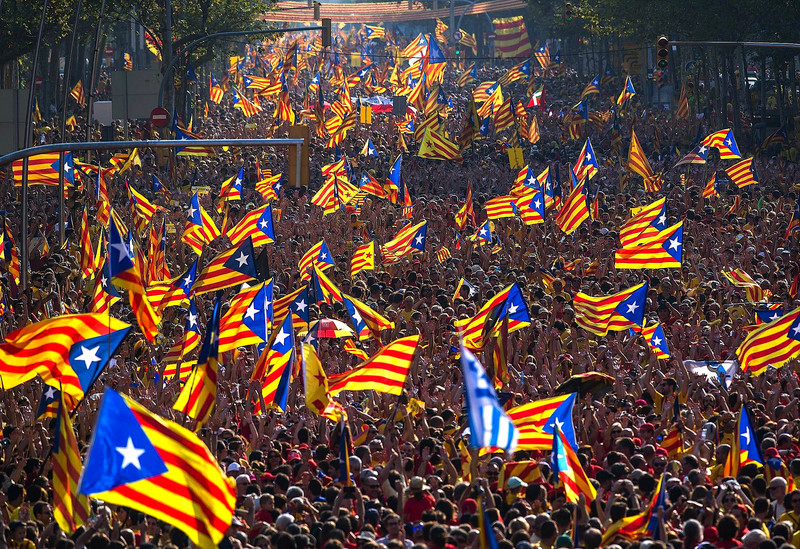 So the nice Catalonians have declared independence and the nasty Spaniards have revoked regional autonomy. Both sides now have to try to make their ideas into reality, ideally without doing too much damage to the real world in the process.

But the main point of the post - other than weakly declaring my support for self-determination, which I hope you've already guessed - is to note the disappointing role played by the EU in all of this. In my idea of Europe - and nominally, of the EUs too I think - nationanlism becomes less important. You're not setting economic policy locally, your borders with fellow EU entities are nearly meaningless, so whether you're part of one state, or another, or independent to whatever degree should matter much less. And this should be one of the major advantages of EU membership.Notice that, unlike Scotland, which would run such a massive deficit that it wouldn't meet the EUs rules for admission, Catalonia would qualify.

But instead of acting as any kind of shining ideal, the EU is falling back on a strictly nationalist thuggish "enforcer" role, making it look unattractive. Also, Rajoy is clearly a tosser. So is May, but you knew that already.

[Update: to avoid confusion - and to record my opinion for my own future reference - the above should not be mistaken for full-throated endorsement of Catalan actions. I'm with Hobbes: you're allowed to revolt against central authority, but only if you have a good chance of success.]

How can the EU not see itself as herding cats? In that situation, no one wants one more cat.

Still, I'm rooting for Catalonia. Government closer to the governed.

The Barcelonans are cool, but if Cataluna goes , It'll be Ibiza for the Ibizans, Foramera for the Forams and Guernica all around.

But what about the rest of Spain?

It's all part of NATO, and it only has one navy.

Since they are the only ones recognising themselves, does that make it Cat'alone'xit?