As I said, we visited the National Gallery. There's some nice stuff there. Here's some of it. These are in some kind of order... the order I saw them, which is roughly by age. They are all clipped, mostly not very much, cos I don't like to see the frame. Despite my best efforts, not all of these are perfectly lit (or, for the longer ones, perfectly flat) so you may prefer a better repro elsewhere.

As to COVID itself I have nothing new to say today; I found How much ‘normal’ risk does Covid represent? by David Spiegelhalter interesting.

The Wilton Diptych (right hand panel). 139x. Gets a small room all to itself. Lovely, but I wish I could stop seeing the background as the fuzzy pegboard stuff. 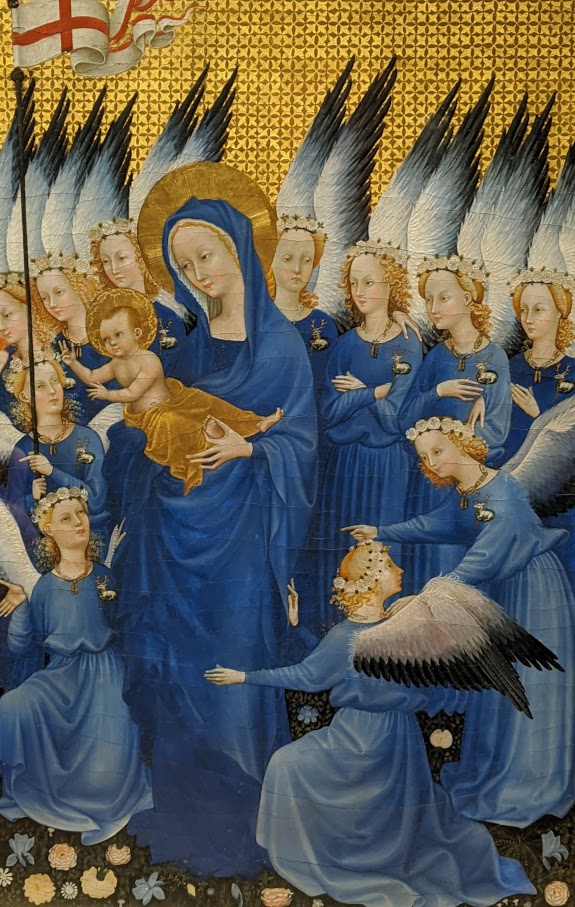 Christ showing his wounds. Weirdly modern-looking in structure and colour - to me - but about the same age as the diptych above. If you look at it from a distance you may not notice that his robe is rent and there's a gash in his side. The apostles coyly hide behind him in their haloes. 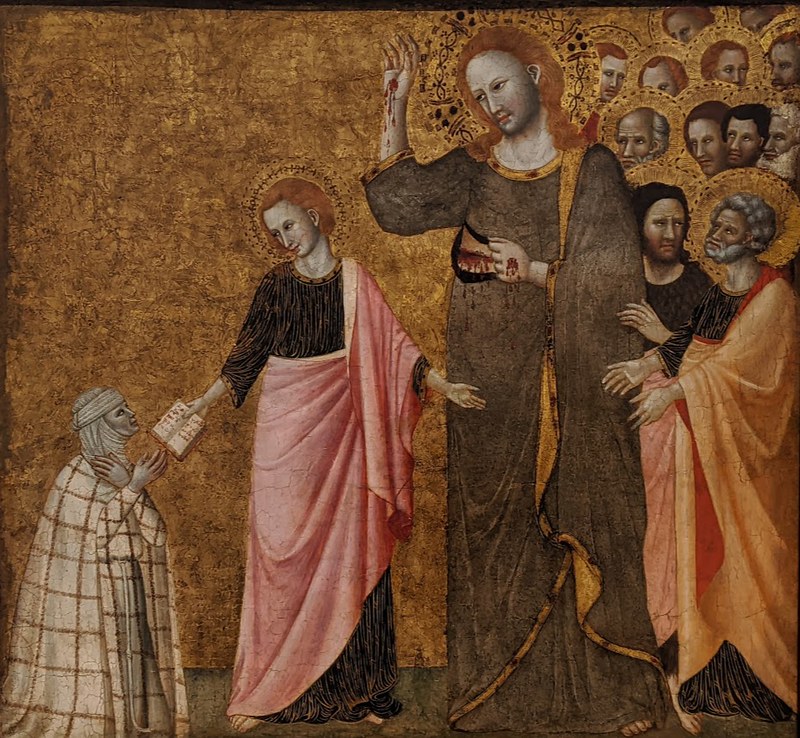 A fairly typical scene of St Michael defeating the devil, but a gorgeous example. The armour! The serene face! The fearsome devil! The gorgeously folded cloak! And the benefactor, unfazed, kneeling. Bartolomé Bermejo, the most important fifteenth-century Spanish painting in Britain.

Saint Veronica with the Sudarium: According to her legend, Saint Veronica saw Christ fall as he carried his Cross to the site of his crucifixion. Taking pity on him, she offered her linen handkerchief (called a sudarium) to wipe the sweat from his face. When he returned it, an image of his face was imprinted upon it. One of the many many weird ones in there; well, St Michael and the devil is pretty weird, too. 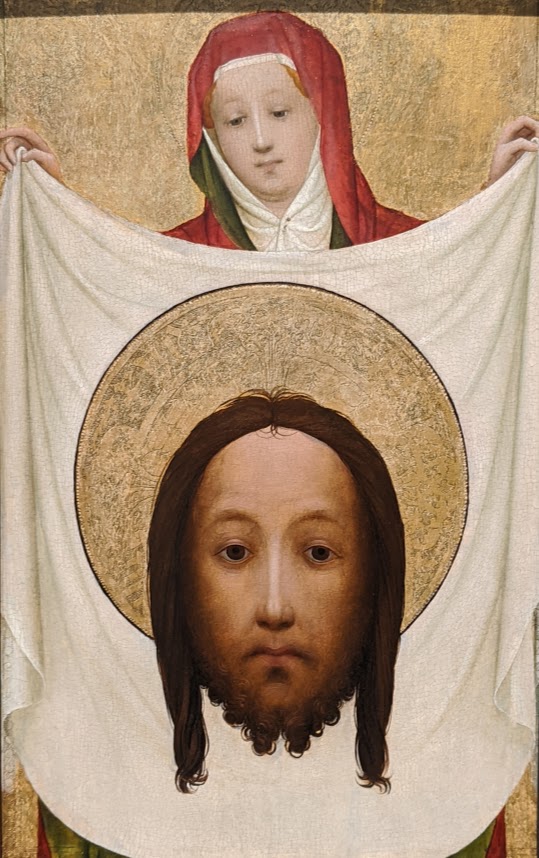 Christ being taken down from the cross. A nimble boy at the very top of the painting attempts to support Christ’s weight while clinging on to the arm of the Cross, hooking one ankle over it to prevent himself from falling headlong. Which is the bit I liked: his contorted spidery appearance and, because of his colouring, his visual identification with Christ, is good. As is the odd gilded niche in which the action is placed. 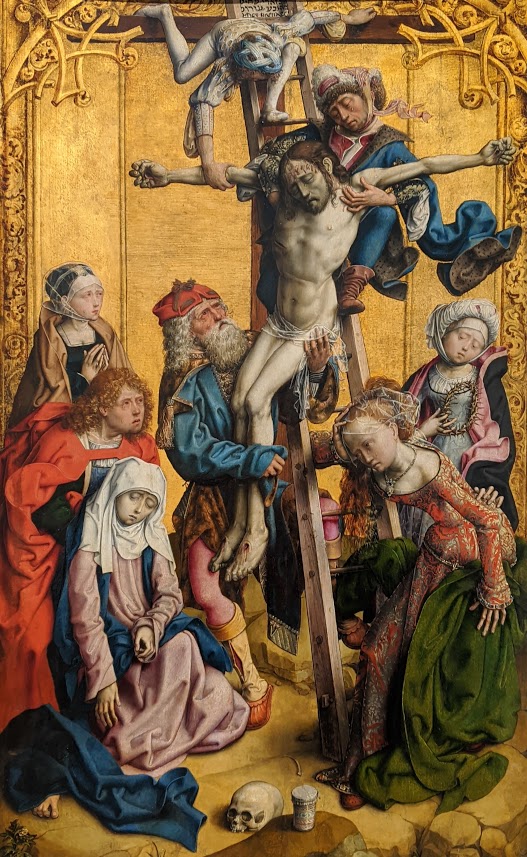 Mr and Mrs Andrews. This one is famous because it was in my school history textbook about the changing face of England in the 18th century. 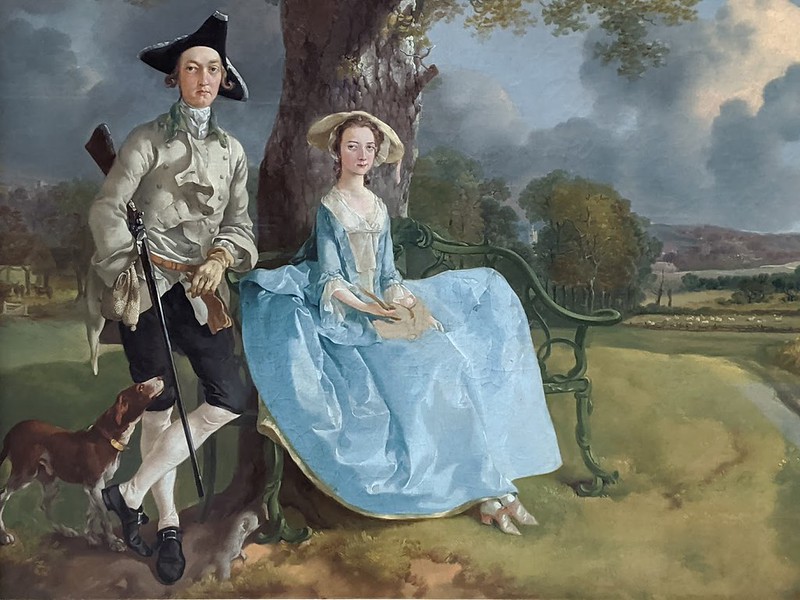 The Fighting Temeraire. 1839. Massively famous, a good painting, well worth a look. 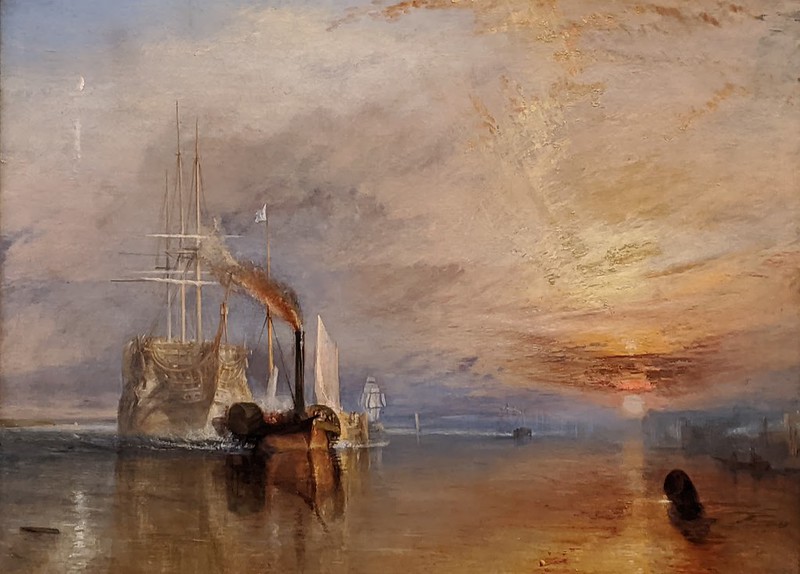 Lord Ribblesdale. 1902. Just to prove I can like things other than intricately detailed pain. Lifesize or more, hung on the wall of the mail hall. 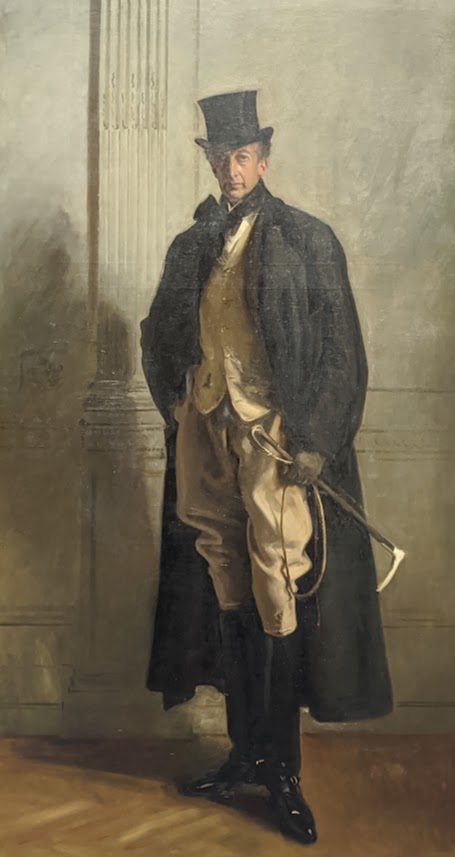 
* Landscape with the Fall of Icarus (Uffizi)
Posted by William M. Connolley at 8:36 pm

DS's table 1. If the health care system is massively overloaded, the columns labeled hospitalization times the column labeled critical care will be a better approximation of the death rate than the last column of table 1.

With the health care so overloaded, people will avoid going to get care for other issues. Which will increase the death rate more, but harder to say how much.

If we don't get R0 below 1.0, the infection rate will rise to 10% or more. Ok, 1.001 or some delta above 1.000 probably works as well, as the number infected needs to stay very small for the next year or so, until a vaccine is tested and available.
Death rates will be more than twice DS projects unless the infection rate stays well below 1%. So more like 2 years of deaths. Very roughly. 3 years for ages 60-69. In a few months.

Impressive effort to which you might care to contribute some machine cycles:
https://m.medicalxpress.com/news/2020-03-crowdsourced-virtual-supercomputer-revs-virus.html#
Looking for a hook into the SARS-COV-2 coronavirus for a vaccine.

If you have yet to read this, please do so.