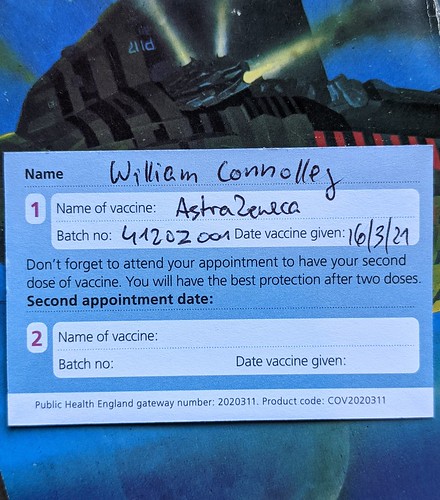 My first wildly exciting Coronavirus post wasn't; and don't expect this special anniversary edition to be any more exciting. But it is now a full year since March 17th 2020... how are things going?

Personally, they are fine. I'm working from home; so is my wife; so, now, is my son (for Darktrace, since you ask). The slightly eccentric several-small-rooms design of our house has facilitated this. My daughter is off at university, but since terms are short she is now back at home. Work is remarkably unchanged; being at home makes little difference. Some things are a bit annoying - swapping kit around for example - but that happens rarely. Talking to others, casually, is hard; so collaboration is down a bit. But we have regular meetings, so we all stay in touch. Overall I think that in terms of the work I get done, it's a net positive; and in terms of my work-life definitely better. I save an hour commuting each day, so gain that time, though I also lose that exercise. And since I'm at home I get to do useful things, or nice things like sit in the garden, in the odd 10-minute breaks; instead of just moodily slouching around the work kitchen wishing there was somewhere nice to go. And no-one cares if I wear shoes or not (spoiler: I don't).

On a more personal level I miss the coffee shops, and I miss rowing4, but not much else has gone. I missed going to Scotland this New Year, too. Hopefully the idiot EU will sort themselves out by summer time. 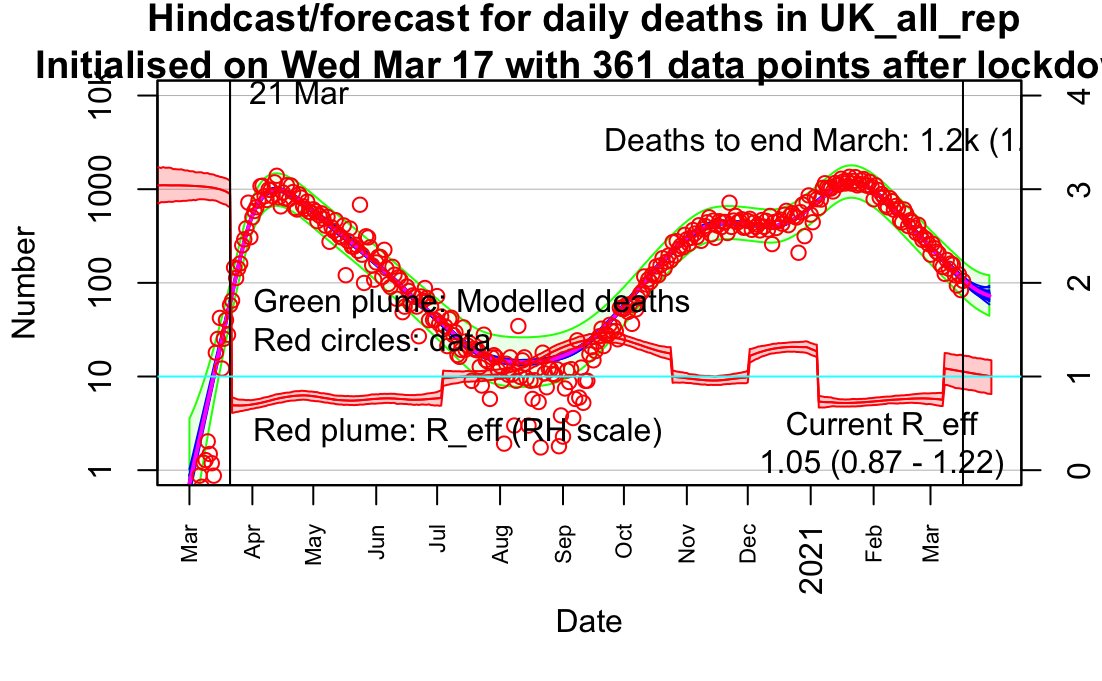 Just yesterday I got vaccinated, with AZ3. This being NHS-mediated, I wasn't given a choice, but then again, I didn't want one. The idiot EU folk, not content with having badly fucked up their vaccine roll-out, are doing their best to stuff it up even further and flailing around; and now out of an excess of caution are killing their own citizens2. Meanwhile the selfish Yankees are holding on to 10M doses of AZ that they won't use but won't give away; so much for Biden being the good guy1. I get my Daily Dose of Death via JA on Twatter - inlined - and the steady decline is good to see; deaths are now ~below 100/day.

David Spiegelhalter says There's no proof the Oxford vaccine causes blood clots. So why are people worried? The answer, of course, as far as ordinary people are concerned, is because their idiot authorities have paused vaccinations; and since, we're constantly told to "trust the experts" these experts must have some good reason for doing so? Of course the answer is that they don't; they are idiots; but DS isn't brave enough to say so.

You're only as good as your last crisis, so our glorious govt's comparative failure a year ago compared to the EU will effectively be forgotten; meanwhile history is being rewritten under our feet, but people have memories like goldfish so that will probably work. The loud voices that told us a year ago that the UK and USA were doomed because capitalists can't cope with plagues have gone rather quiet now that France, Spain, Germany, Italy all have higher death rates than the UK does5. Take that, lefties.

1. Spoiler: he isn't: he's a pol. Update: and to be fair, the Yanquis are starting to get their act in order: U.S. to Send Millions of Vaccine Doses to Mexico and Canada, though they haven't actually done it yet, and only 4M out of "tens of millions". I await further updates.

2. To be fair, the EMA appears to be sane. Update: and has now told the EUdiots once again that it's all fine, and it seems they might listen this time. But, gloriously, the Frogs have stuffed it up again.

Flailing continues: AstraZeneca plant inspected by Italian police at EU's request. I'm doubtful that the EU really believes in the rule of law at all.

3. And this morning I felt distinctly sub-par. But I think I'm back now.

4. Lents didn't happen but hopefully Mays will; and we're hoping to run the Head of the Cam in late April.

5. As long as you remember to look at present rates, rather than cumulative. See previous comments re goldfish.

* a liberal democracy is characterized not by “popular rule” but by various devices providing for “an intermittent, sometimes random, even perverse, popular veto” which “has at least the potential of preventing tyranny and rendering officials responsive.”
* The EU's AstraZeneca vaccine stance will cost lives, here in Spain and all over Europe by A. Spaniard.
* Covid: Arrests during anti-lockdown protests in London
* Thank You AstraZeneca says JA (no, not that JA).
* How the beach 'super-spreader' myth can inform UK's future Covid response via PW.
* Science in the Time of COVID-19 - ATTP.

* Suicide trends in the early months of the COVID-19 pandemic: an interrupted time-series analysis of preliminary data from 21 countries: no evidence of a significant increase in risk of suicide since the pandemic began in any country or area (which when you think about it is surprising, given the number of series they had...) from the Lancet.

Happy Covid-Day. May the odds be ever in your favour and please use some of the extra time you describe here to post more frequently.

What do you know of Kate Raworth and Donut Economics?

If I ever engage with Michael Tobis in conversation again, I might put forward her theses as a counter-offer to his no-growth obsession.

We are sending our AZ to Mexico and Canada:
https://www.nytimes.com/2021/03/18/world/americas/usa-mexico-vaccine-coronavirus.html

My theory is that the main failures of the EU are doe to lack of a strong central authority. It is trapped in that hopeless valley between state and social club.

I react badly to that, but perhaps it is just the language. These cretins dissing std economics as though it was politics doesn't give me much hope for their thinking ability.

> We are sending our AZ to Mexico and Canada

It was reported here, too. But don't pat yourself too hard on the back: you're only sending 4M out of "tens of millions" sitting idle, and you haven't actually done it yet "not finalized yet, but that is our aim" - indeed, from that, it sounds like you haven't even definitely decided to do it. But never mind, no hurry, it's not like there's a pandemic on or anything, plenty of time to sit and think and see how it plays out on the networks.

Tom - I suspect much of the doughnut economics stuff would be right up MT's street. As he's a self-confessed worry wort, all the talk of overshooting planetary boundaries and ecological collapse will just provoke a "Exactly as I've been saying!!" response

Having one of the planetary boundaries as 350ppm CO2 (defined, written in stone and unassailable) gives a hint about the amount of nuance invloved.

Too much (negative) fantasising for me. Apocalypto-armaggeddonology..

Anteros, I understand, but I do like the idea of tying our economic aspirations to our care and feeding of the planet. I do of course understand that efforts to do this so far have fallen somewhat short.

WMC: 'Hopefully the idiot EU will sort themselves out by summer time.'

Blimey! You lot are finally seeing the light. A shame that a global pandemic was required, bla bla.

Your quoted comment almost stole the words of a millionaire-trust-funded ever-closer-union outfit that in October last year posted this amusing but wrong-headed cartoon:

(Less than 200 views. Great graphics. Let's get it trending!)