Back to the ice ages: Ice, by Fred Hoyle

[Beware: long intro...] A long while ago, in the mid-70's, there was a minor kerfuffle about the "coming ice age". A good summary of the episode comes from the words of noted Alarmist Richard Lindzen (warning: I'm being ironical) the scientific community never took the issue to heart, governments ignored it, and with rising global temperatures in the late 1970s the issue more or less died as written in the journal of the notoriously pinko Cato Institute. The only lasting influence of the episode was in the powerful, but self-contradictory, lyrics of the Clash's Londons Burning: "The ice age is coming, the sun is zooming in". See http://www.wmconnolley.org.uk/sci/iceage/ for a badly organised but very detailed look at various sources; or [[Global cooling]] for a better-organised but briefer version; or RC:94 for a general blog-type survey (all those are essentailly mine).

There were various contributing factors for the kerfuffle: a slight observed cooling trend (which was bigger in the northern hemisphere than globally; and in the mid-1970's the first such datasets were being put together; I think the initial ones exaggerated the cooling compared to more modern records); probably, an end-of-worldish feeling (Cold War etc etc); and a growing recognition that there had been far more ice ages in the past than previously realised, and that projecting such cycles forward "predicted" another ice age... sometime; and a realisation that human outputs of aerosols could lead to cooling. In the public mind, the distinctions between these got very blurred, and the Clash song is probably the best (though I suspect unintentional) reflection of this.

However, by the late 1970's/early 1980's research had advanced. The early uncertainty (would CO2 leading to T up, or aerosols leading to T down, predominate?) was being resolved in favour of CO2 and T up; and the observational record was getting to be of higher quality and was showing the end of the cooling trend.

Which is why pretty well everyone agrees that whatever scare there was, it was over by the 1980's. So where does that leave... [at last, end of intro]...

ICE: A chilling scientific forecast of a new Ice Age

And the answer is: well behind the times (aside: putting your qualifications on the front cover is a bad sign. And asserting that you are giving a "scientific forecast" is a pretty broad hint that it will be quite the reverse). In fact (and I'm going to continue in a deconstructionist vein for a while: eventually I'll get on to talking about his science, such as it it) the tone is set by the start of the intro: "Forty-five years ago, almost two-thirds of a lifetime ago, I was a research student in the University of Cambridge...". And in those days, the theories of the ice ages were discussed (with, by modern standards, an almost total absence of data). And "The Croll-Milankovich theory was ... largely discounted in my student days... my own opinion has not shifted". And in a nutshell, thats it: while the rest of the world has largely accepted (certainly by 1981) orbital forcing as the cause of the ice ages, Hoyle was clinging to his student days.

One possible reason for why is that (from the point of view of dramatic climate developments) adopting the orbital forcing view is rather dull, since you don't get to predict exciting immenent ice ages. Orbital frequencies are slow, the relevant ones are 20, 40 and 100 kyr cycles, and predicting a new ice age in 5kyr isn't going to sell many paperbacks. You need a theory that will predict faster changes. 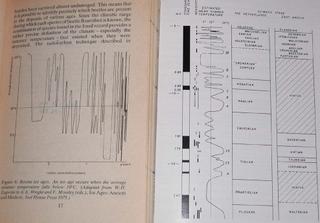 But before looking at Hoyles theory, what about his evidence? Early on, he asserts that ice ages are getting more frequent. As evidence, he produces this pic, which is redrawn from "Ice Ages: Ancient and Modern" eds. Wright and Moseley. In fact most of his evidence is from this volume, which is perfectly respectable of its sort, but its dated (its a conference proceedings of a UK inter-university conference from 1974) and its of-a-certain-type, to my reading. Its glacial tills, beetles, pollen records, all the kind of stuff you do from tramping around formerly glaciated regions. Of the (then new and exciting) field of ocean sediment cores I can find nothing. In 1974 it was perhaps a bit fuddy-duddy, but not fatally so. By 1981, when Hoyle was writing, it was very badly out of date. Which brings me to the figure. As you can see, Hoyle says his is re-drawn from theirs, and it is. Though... it has been stretched a bit, and the not-entirely-coincidental result of this is that his oscillations look much more abrupt, which suits him. Hoyle says that the figure shows that the oscillations have been growing more extreme and more rapid. This is (briefly) supported by the text in the original article. But: we now know its wrong. [[Temperature record]] (the 450 kyr and 5.5 Myr pics) will show you that the ice age cycle *hasn't* been getting more frequent. In fact it swapped from a 40 kyr cycle to a 100 kyr cycle about 1 Myr ago.

My best-guess of why Hoyles figure is wrong is the obvious: the sort of records that figure is built from have higher resolution the more recent they are. So of course they show up more oscillations in the recent periods, just because they can resolve them. Fortunately, ocean sediment cores don't suffer from that problem. Unfortunately for Hoyle, he knows that, because he reproduces as his fig 43 a 700 kyr sediment-derived ice proxy from Shakleton and Opdyke, which flatly contradicts his fig 6, and which he should have known is more homogenous and more reliable.

And its worse than that, because the seminal Hays, J.D., J. Imbrie, N.J. Shackleton. "Variations in the Earth's orbit: Pacemaker of the Ice Ages." (Science, 194 (1976): 1121-1132) had been published in 1976, and convinced just about everyone of the Milankovitch theory of the ice ages (the orbital-forcing theory is an interesting one, probably the most-wrong-ever theory in the history of science, people kept on and on proposing new connections which were continually disproved every time new evidence came along, until they finally got the theory right), leaving behind only people like Hoyle. And its even worse than that, because he even discussed HIS briefly (p 66). He gets it terribly wrong. HIS show by fourier analysis that the periodicites in the sediment cores are what you expect from orbital forcing, with a dominant 100 kyr peak. Hoyle caricatures this as (I paraphrase) "if there was an ice sheet (for other reasons) of course the orbital periods would be picked up by a sufficiently sensitive statistical technique". Hoyle is trying to imply that these are small fluctuations, hard to see. They aren't. They are the dominant signal in the frequency domain. Either Hoyle has misunderstood the fourier analysis (unlikely: he is a pretty eminent physicist, which implies good maths) or he is evading the point of the HIS paper and misleading us (and thats being kind).

OK... so, if you've got this far, then I hope that I've convinced you that Hoyle is wrong, or at least pinning his hopes on dodgy out-of-date evidence. But what is *his* theory? Lets read on...

Firstly, Hoyle convinces himself that erratics can't have been transported by glacial flow (why? it comes in later); then that the only way for ice ages to occur is for changes in the earths albedo (reflectivity) to occur. Which brings us to chapter 8, where things get wacky. 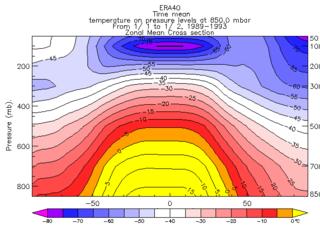 Hoyles theory is going to be that ice ages occur when a layer of ice crystals forms in the upper atmosphere when the temperature drops far enough (below -40 oC) that crystals spontaneously form in the absence of cloud condensation nuclei (CCN). Which is where things get odd, because temperatures below -40 oC are fairly common in the upper atmosphere (OK so its quite dry there, but still, thats not his point). He qualifies his -40 as occurring at the "top" of the water vapour distribution, and by "top" he means the point in the atmosphere where it becomes radiatively thin enough that IR starts escaping to space. What that has to do with absolute temperatures and WV condensing, though, is anyones guess. By another wild leap, he then decides that if global precipitation is less than 56 cm, diamond dust will form in the upper atmosphere, reflecting incoming solar and cooling the planet. Then there is a heat-storage bit, and finally he arrives at his theory: that an incoming meteorite will throw up enough dust to cool the earth temporarily, and 10 years of that is enough to kick in his implausible mechanisms and cause an ice age. Whew.

So: his theory has a 10-y precusor period of vast storms, lightning strikes (which split off the erratics) and nice smooth ice sheets build up down which the erratics merrily slide, friction free (he really does say this: well, at least, he says "skating rink"), wheeeee. They even go uphill this way, if pushed by a bit of wind.

Well, thats about it. Naturally Hoyle has to avoid discussing his original (incorrect) observation that the ice ages were becoming more frequent, because his theory doesn't predict that. Nor does it appear to predict that regular 100 kyr cycle he knew was actually observed (but he could probably have wangled a 100 kyr periodicity in meteorites had he tried hard enough). A disappointment at the end is that his theory doesn't even predict an immenent ice age - all it predicts is an unknown chance of one at some point. Hey ho.
Posted by William M. Connolley at 11:52 pm

Is there any review paper, book or something that discusses how the orbital forcing theory of ice ages fell into place, including all the errors made along the way?

Yes! And I should have mentioned it. The excellent (ie, well written and comprehensive): Ice Ages: Solving the Mystery by Imbrie and Imbrie (yes that one, and his wife). I discuss one chapter of it http://www.wmconnolley.org.uk/sci/iceage/imbrie2-1979.html. abebooks will sell you one cheap (I like them, they have a server called dogbert).

The public library catalog online shows a copy of Imbrie & Imbrie, and hopefully it is shelved properly.

Gavin already said it, but the jacket of the book says, "This book was written by one of the principal scientists of the CLIMAP group and his daughter, a writer".

Imbrie & Imbrie is a good read. The vicissitudes of the orbital forcing theory make me wonder about the durability of global warming or anti-global-warming theory. Also, perhaps returning to the climate of 7000 years ago may not be a terrible disaster.

Oh rats. Daughter. I have the book on my sofa but didn't actually check :-(

There is a moral in the multiple versions of the orbital forcing theory but I'm not sure quite what it is. One might need rather more detail about what people were thinking at the time. Certainly there is a desire to *explain* things which can be pushed too far. But attempting to prove/disprove the theories probably spurred research, which was good.

I was interested to come across this because I read Hoyle's book at the time which was also a time I was considering his cometary hypothesis (Diseases from Space etc). Actually I am not so sure about Hoyle's ability in mathematics or, to put it another way, I think he developed a preference to doing his own maths rather than understanding the maths that others had thought necessary.

Certainly his mathematical analysis of epidemics was just awful. I have an article on the web written a long time ago explaining why. See http://www.senns.demon.co.uk/COMET.pdf