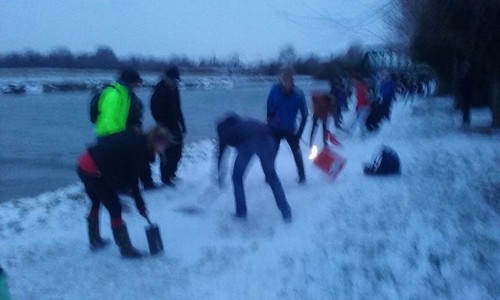 
To that we can now add:


So that's a rather sudden jump in income, although still to a low level. One possibility is that they've noticed people looking at the numbers and have persuaded some to increase their donations. Another, of course, is that the membership has actually gone up. Now I look, The Ecologist has noticed too but they also don't know. Their headline is Climate science denial group GWPF sees membership income double post Trump's election but I'm dubious of the Trump connection. Companies house says the accounts were filed on 15 Feb 2018.

My rubbish picture - it was late on a grey and very cold day - shows a crowd-sourced attempt to clear the towpath to allow Lents to take place on Friday, having been stopped on Wednesday after an accident, and not run at all on Thursday due to dangerous conditions on the towpath.
Posted by William M. Connolley at 10:19 pm

Hi there, sorry about the OT comment, but the Wikipedia page on Tim Ball appears to be being got at by somebody from a parallel universe.

Perhaps they tired of getting value for money five thousand pound a year , and opted to cannonball on a better cartoonist.

Wiki is never off topic :-)

The Tim Ball page problem is single-purpose account CEOmike but notice that the worst of the damage has already been fixed.

"Since the peak of the recent record El Nino in March 2016, global temperatures have fallen back by 0.5 degrees Celcius and are now back to pre El Nino levels. The 2015/16 event was the strongest such event ever recorded and helped to make 2015 and 2016 the warmest years in the modern warm period. The rise and fall of global temperatures in response to an exceptionally strong El Nino was anticipated by a number of sceptical scientists but was denied by most meteorological organisations, including NASA, NOAA, Met Office and the WMO who claimed that El Nino was a negligible factor of the warming of the last three years."

Anyone want to have a go? Would it be a worthwhile exercise if we could push the accountancy fees up to say double their current level of £7,189?

The directors and trustees have responsibilities for their accounts showing a true and fair view. Is it the responsible thing to do to ensure they act appropriately to avoid misleading statements being included in their accounts?

It could be worse, you could be stuck on the erg instead of shoveling snow ;)

It was all worth it, today happened:

I skimmed over the director's report. I bet everyone else did too. I suspect that in things of this nature people will only care about the financial numbers.

>"I suspect that in things of this nature people will only care about the financial numbers."

I am dubious of that, but you could be right. In particular, if a Chartered Accountant suspects that some people will make a complaint to the ICAEW that could cause no end of trouble and suddenly the risk assessment associated with such accounts preparation & examination should (and I believe would) skyrocket causing them to plan to be hugely extra cautious, spend a lot more time and bill more accordingly. (Or if not that then resign as examining accountants and someone else may need to be found who on professional etiquette enquiry might be informed of the risky nature of the examination.)

Getting involved in doing this, seems like it is only causing what should happen to actually happen.