Oedipus Tex, and other Choral Calamities 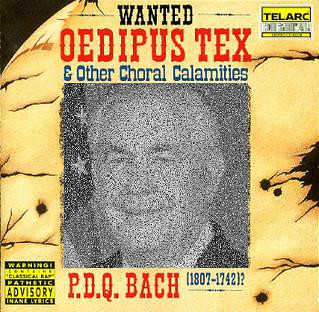 You've heard it before - or so I should damn well hope - but since RS reminds me, and CIP also comments, I think I should too. Who could ever forget "the cat drinks only gerbil milk"? Or "transporting young gulls, across escaped lions, for immoral porpoises"?

My ire was raised by the HuffPo, and it's headline "Trump’s Pick To Replace Former Exxon CEO As Secretary Of State Is A Bigger Climate Denier". WTF? I have as yet no particular opinion on Mike Pompeo, but the implication that Rex Tillerson is a Climate Denier is fuckwitted, and all too much a part of the general loss of any sense of proportion amongst the more panic-stricken members of the  Left.

Their argument, insofar as they have one, appears to be In a twist, Tillerson, the former chief executive of Exxon Mobil Corp., turned out to be one of the most moderate voices on climate change in the Trump administration, despite his previous employer’s role as an early and generous financier of the climate change denial movement. But this is silly. Exxon-is-evil stems from the Lee Raymond era. Tillerson, by contrast, supported the Paris agreement. Under his leadership, Exxon supported a carbon tax (admittedly not terribly convincingly, but they were at least nominally in favour). If your bar for "climate denier" and other forms of ideological purity is that low, you're going to have an awful lot of enemies and not many friends.

FWIW, my not very well informed opinion is that Tillerson was a decent guy who reluctantly accepted a job from Trump that he didn't want, for the good of the country.

Not an effective Secretary of State?


CIP, in the comments, makes this assertion. It seems reasonable to me; perhaps even undeniable. But the question then is why? You could blame him, and perhaps he wasn't a natural inhabitant of the post. But I would blame Trump. My theory - which is as valuable as anyone else's - is that Trump picked Tillerson (a) for his contacts with Russia, and (b) because at that point in his filling-posts he was desperate for someone with gravitas who hadn't called Trump a twat. Part (a) didn't really work out: the Left was desperately anxious about the Russian ties, but I think there was less there than people thought, and perhaps the Mango Mussolini was disappointed. And as for part b: how could anyone with gravitas possibly get on with Dumpy Donald? With T contradicting Tillerson anytime he goes bored, it was impossible for Tillerson to do the job.


* Tillerson calls Washington a 'mean-spirited town' in farewell speech - CNN
* Tillerson warns military grads of 'growing crisis in ethics and integrity'
* An interview with Tillerson from 2012 in which he is distinctly lukewarm re GW
Posted by William M. Connolley at 5:09 pm

Pretty sure that I didn't proclaim on Tillerson's climate views. He was, of course, a climate moderate in an administration of denialists. He may well be a good guy, but he was not an effective Secretary of State.

I wasn't trying to imply you'd said anything about his GW views. As for Sec: yes, agreed, but. I've updated the post for that.

As with politics, perhaps so too with the climate conversation. Opponents are not evil--they're just on the other side.

You neglect his willingness to dismantle much of the State Dept. Someone with actual gravitas would have refused to do that.

Grammar fail? Perhaps Huffpo "and it's [sic] headline" headline referred to Pompeo as a bigger CC denier than Trump, rather than T, Rex.
In support, their third para says...
"In a twist, Tillerson, the former chief executive of Exxon Mobil Corp., turned out to be one of the most moderate voices on climate change in the Trump administration, despite his previous employer’s role as an early and generous financier of the climate change denial movement."

Letting the side down, Greenpeas accuses Pompeo of "being a climate denier, like his predecessor", which he clearly ain't. He rings Ebell's tickly bits, which is a glaring pointer – this denier is the real thing. Trump was initially rather ambiguous, seeming to say what the Republican right wanted rather than it being a central feature, but in practice he's now produced the deniers' dream administration. Even if he's impeached, don't expect Pence to be any better.

Andrew McCabe gone.
Comey doing a book tour with Andrew doing the front of the house.
Can you get me an autographed copy, William. Will be worth buckets in 10 years.
-
Tillerson was one funny man. I thought he did a good job. I thought in his position at Exxon he did more than most CEO"s to promote climate change.
One of the green group, really.

Whatever, Tillerson was better than his replacement will be. That's not saying much.

Teach me to comment when insomniac. Depends just how you read "despite his previous employer’s role as an early and generous financier of the climate change denial movement but not inherently silly – it's entirely compatible with Exxon-is-evil stems from the Lee Raymond era.

Wondering about this focus on CC denial, had a look for the Graun doing it, but found none. All the focus is on other areas, notably Iran and N Korea. Did find, tucked away in https://www.theguardian.com/us-news/2018/mar/13/mike-pompeo-who-is-he-secretary-state-trump-new-rex-tillerson-from-cia ...
"Tillerson supported the Paris deal and pushed the president to stay."

More focus on T, regardless of his success as an Exxon exec, failing to

Meant to say, Rex Tillerson, despite his impeccable background as a business leader, has been undermined by Trump's repeated indecision and interference, and has also failed to provide the support and leadership needed by his own department.

Modern conservatives show enthusiasm for undermining the public sector, even where it's the traditional conservative approach, and this can be damaging. It will be interesting to see how the department fares under Pompeo...

I still have respect for Tillerson. Not a bad person, just did not understand what the job required.

Trump make the task impossible, so even if he handled the office correctly he still was doomed.

I suspect 12 years is a bit long a period to bet on. Would you be willing to bet (with William Connolley?) on whether ice extent would be half way down to 1m km^2 in 6 years time? if not that, some different figure?

Wondered if that was of interest to you? No idea who he is other than one of many alarmist on Neven blog, so take at your own risk.

I could be interested. I think 12 years is too long; your suggestion of 6 years for some value in the middle makes sense.

> He has never been a professor at any school that I am aware of. He has not written anything meaningful about the economy. He had a TV show on which I was an occasional guest for several years until his producers decided I was not de rigueur political correctness wise

How seriously do you take that? The last bit just reads like sour grapes and would have been better omitted. The "has no professional qualifications" I think is close to meaningless. Trump's economics policies are so far away from sanity that *professional* qualifications are meaningless; what it needs is someone capable of telling Trump "free trade good, protectionism bad, Peter Navarro fuckwit".

Actually, am I failing the Poe's law test? https://spectator.org/thank-god-that-trump-won/ suggests so.

Kudlow comes across as a self-invented talking head worthy of Paddy Chayevsky, Al Capp or the Communications School of Liberty University.

He departed Bear Stearns after assuring the world that all was well with the derivatives market in December 2007.

His record for prediction in 2007 does appear poor; although he shares that record with many other people.

Indeed. He told the NYTimes :
" "Despite all the doom and gloom from the economic pessimistas…the resilient U.S. economy continues moving ahead."

"The most persistently probable curve-fit model from all the methods examined appears to be Gompertz, even if it is not the best of the subset for all analyzed periods. The FIASY [first ice-free Arctic summer year] projections based on the fittings from these six models are converging to the time frame of 2037 ± 6, with a spread of 17 years, and the earliest first FIASY projected at 2031."

Worth a post, together with this year's ice, but "Accurate projection of the first Arctic ice-free summer year is extremely important for business planning..." is nonsense. Or perhaps more accurately, the kind of boilerplate you're expected to put into this kind of abstract.

I liked the conclusion that
"The most persistently probable curve-fit model from all the methods examined appears to be Gompertz, even if it is not the best of the subset for all analyzed periods."