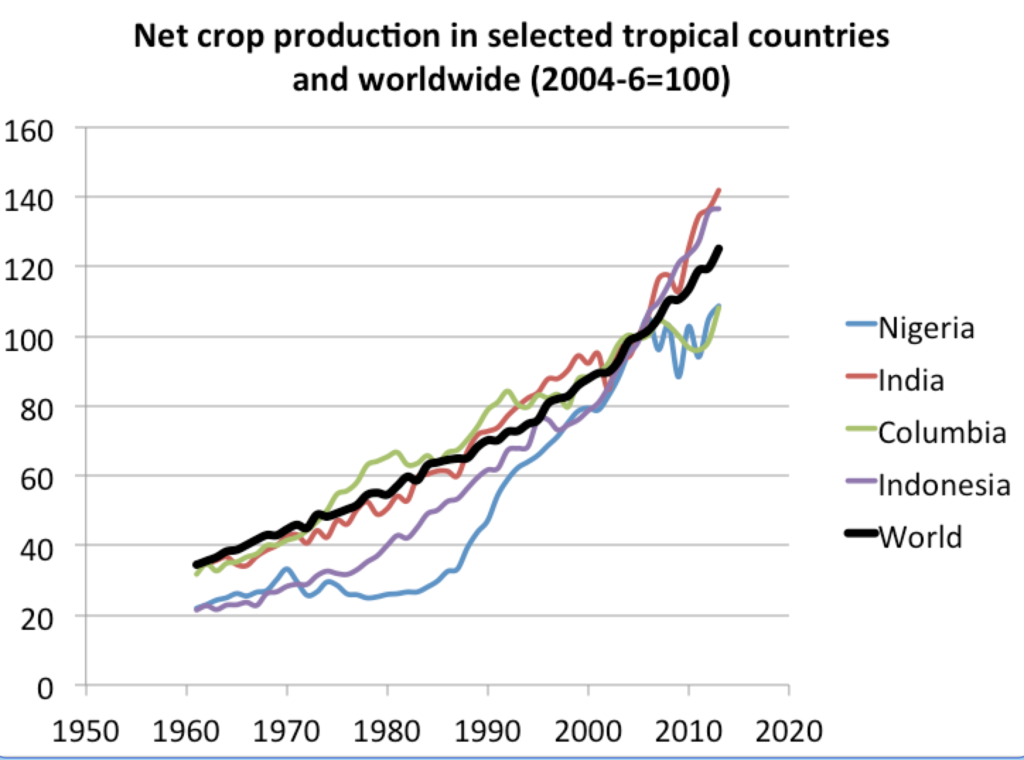 Crop Yields Under Global Warming is a post by David Appell. DA's take-home message is I don't anymore see a big problem here. Am I missing something? Whereas the traditional view of this is ZOMG we're all gonna die.

I guess I need to justify the ZOMG version. For example Climate change will cut crop yields; August 15, 2017 at phys.org: "Climate change will have a negative effect on key crops such as wheat, rice, and maize, according to a major scientific report out Tuesday that reviewed 70 prior studies on global warming and agriculture... the overall trend planet-wide is downward, signaling that steps are needed to adapt to the warming climate and feed an ever-expanding world population". Or the overall global effect of climate change has been small so far: losses of a few percentage points for wheat and corn from what they would have been without climate change. The overall impact on production of rice and soybeans was negligible, with gains in some regions entirely offsetting losses in others... But... temperature increases were expected to accelerate in coming decades, making it likely that the challenges to food production will grow in an era when demand is expected to rise sharply from the NYT in 2011. Or there's some weak stuff from RC in 2014; Eli covered the same thing.

The mistake these are making, and this is DA's point, is to look at crop yield with respect to GW in isolation, and miss all the rest that is going on: the many generic improvements in agriculture and related processing that our modern mechanised industrialised farming provides. Because what you actually care about is the overall crop yield, not the changes in yield broken down into many factors.

Wiki doesn't do a desperately good job either, in the text, making exactly the same mistake. But it does have the great virtue of including a graph, which I've inlined, so you can see for yourself that whatever may be going on in the detail, world food production is heading up. National Geographic does fairly well.

My point, of course, is that I've said all this before, so why did DA need to write his post? Except now I come to look, while I'm sure I've thought all this before, I don't find myself making the point explicitly. I've got close. In 2009, I ask Could Food Shortages Bring Down Civilization? and predictably answer "no". In 2008 I wondered How overfed are we? and the answer is there is spare in the system. Infertile Crescent?, from 2016, looks at GW and war and concludes that crap govt is the main problem. Climate inaction to be ‘catastrophe’, from 2014, is again skeptical about the crop yield problem, but without making the key point.

The good reason why you'd want to look at changes in yield broken into changes from different components is that it might help predict the future: if you could show that changes due to GW were small now, but could reasonably be expected to increase, and in 50 years overwhelm the changes due to tech, then that would be useful. But none of the ZOMG studies even try to do that, as far as my admittedly small survey shows.

The mistake these are making, and this is DA's point, is to look at crop yield with respect to GW in isolation, and miss all the rest that is going on

Heh, before I read that part I was literally going to say that the mistake you're making is looking at everything contributing to crop yields rather than GW effects in isolation.

The reality is that population is growing rapidly, so crop yields need to be growing rapidly just to stand still. Anything which is dragging on that is a big problem.

I've certainly made the point multiple times to scientists giving presentations on their latest research on the subject. They tend to shuffle uncomfortably and look at their feet.

James: but you're a known trouble maker :-)

Paul: "Anything which is dragging on that is a big problem": maybe, but why pick GW to focus on? Well, because GW is a thing and because scientists study it. Why not focus on the bigger problems like crap govt? Because those are intractable, errm, unlike GW.

I don't think it's unreasonable for climate scientists to focus on the climate related aspects of the problem; that's natural. I do think it is unreasonable to "sell" that as the major problem. Quite often - I think in the cases I mentioned - you can't even tell if they're even aware of the other, bigger, problems. And I bet many members of the public have been deceived.

I wrote on those issues extensively back in the day, usually in arguments with or inspired by Michael Tobis. Nothing Appel writes is new.

Two factors make it quite probable that yields will continue to increase. One is the room for growth in total factor productivity in many countries with large agricultural sectors. The other is the eventual increase in the use of GMOs.

We already grow enough food to feed the 9.1 billion souls that will be among us in another generation. We have to quit letting it rot, get eaten by insects or get thrown away.

I can imagine a day when food will be largely free, with restaurants serving as entertainment much in the way movie theaters do (well, did, before Netflix and Amazon).

Sometimes you just need to work things out for yourself before the truth finally clunks you in the head.

Sorry, but does anyone writing about American ag have access to knowledge about groundwater reserves? My memory is not what it used to be, but I remember flying over good chunks of the U.S. breadbasket and seeing thousands of circles - crops grown with irrigation.

How can we be sanguine about food when the forecasts all point toward increasing drought and heat, while we simultaneously have little idea how much more reserves are in our ancient aquifers? All the good news about increasing yields and tech assumes continued prosperity through irrigation, and that crucial resource might just be suspect.