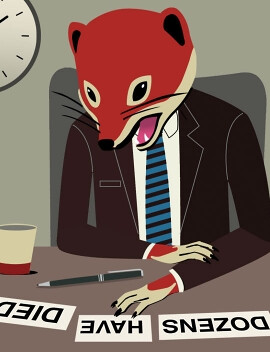 Well, it's what he says himself, and surely the Mango Mussolini is an RS for his own intent. At least, today's intent.

If you want to know if the regulations governing US launch are badly out of date, then the story about SpaceX not being able to broadcast should do you, involving the usual mixture of stupidity, and govt officials lying through their teeth with complete impunity (The director of NOAA's Commercial Remote Sensing Regulatory Affairs (CRSRA) office says her staff was not aware of the unlicensed cameras on numerous earlier launches).

You'll be unsurprised to learn that the best bit of the new directive is, in my opinion, "The President is committed to ensuring that the Federal government gets out of the way and unleashes private enterprise to support the economic success of the United States". The worst bit is most of the rest, where despite the deregulatory language you can't avoid seeing a govt desperate to intervene.

This is "Space Policy Directive – 2". In case you were wondering, directive 1 was "send people to the moon again". Phil Plait was, correctly, unimpressed. Almost everything NASA is planning to do with humans, including pouring money down the drain on the SLS, is going to be upset by SpaceX and friends; rendering almost all NASA planning out to 2025 pointless1. At least, if all continues to go well. Less regulation, and an environment that discourages NASA micromanaging SpaceX, will only help that.

Does Trump actually give a toss about space, or NASA? Doubtful.


1. This must be obvious to insiders; it must be a depressing place to work. An example of the bull case for SpaceX is this.


* CIP hates libertarians. Who knew?
* I went back to Oxford for the last day of summer eights. It was dead exciting; but alas we failed to close them down, though I think we got overlap. The really exciting bit was on a previous day.
* WATN: Trump - me, 2018/01.
* MAGAnomics: a 500 Day Appraisal - Thomas Firey
* Trump attacks Nasa and claims the moon is 'a part' of Mars - the Graun. I'm saving this as an example of the desperate stupidity that Trump pushes people to. Obviously his remark is to be interpreted as (going to) the Moon is part of (going to Mars). But people are so keen to think him stupid that they can't see his words as anything but literal.
Posted by William M. Connolley at 5:56 pm