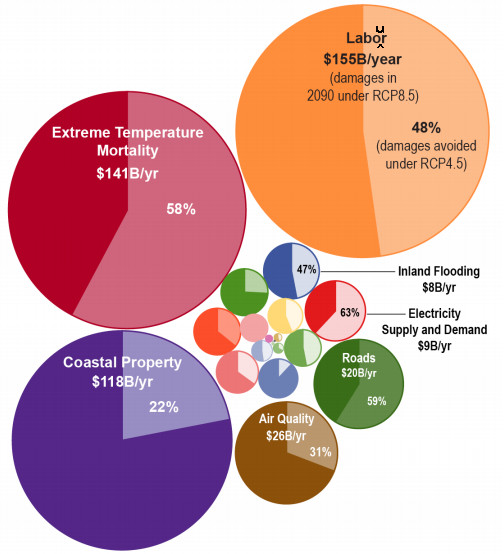 Part two of a series; part one was on Extreme Temperature Mortality. Labour is - IMO somewhat implausibly - the largest economic cost identified. Let's quote them: Under RCP8.5, labor hours in the U.S. are projected to decrease due to increases in extreme temperatures, especially for outdoor industries whose workers are exposed to the elements. Considering changes in both extreme heat and cold, approximately 1.9 billion labor hours are projected to be lost in 2090, costing an estimated $160 billion in lost wages.

So these are no el-cheapo fruit pickers sweltering under the sun; presumably the peons just get to suffer. No, if 1.9 billion labour hours costs $160 billion, then these people are getting about $100 per hour. 1.9 billion labour hours sounds like a lot, but at 300 days a year that's "only" about 6 million hours per day, which for a working population in the hundreds of millions is about 3% of people losing an hour a day. That's within the ballpark I think you'd expect: a small fraction of the population, affected a bit. But again one sees immeadiately that while $160 billion sounds like a large number, it isn't a big fraction of total wages; changes as projected here from GW are going to be a small fraction of changes due to expected growth in the economy over the next 70 years.

But that was all written without reading the chapter. So let's forge on. I find that these losses - which TBH look quite small to me - are regarded as "large" and "very costly" by the report. Hmm, and that's about it.

Well, I say, meh. consider 70 years ago... 1950. Had they projected forwards to now, would they have predicted the increase in mechanisation, and the introduction of air-conditioned tractors? No. And the present report suffers, inevitably, from similar problems. Generic changes in the patterns of employment due to technological and other change are going to be far larger than the changes considered here.

Hmm. Less work? Are they trying to give us reasons to praise global warming?

How will robot working hours be affected? I'm assuming they'll have a union by then...