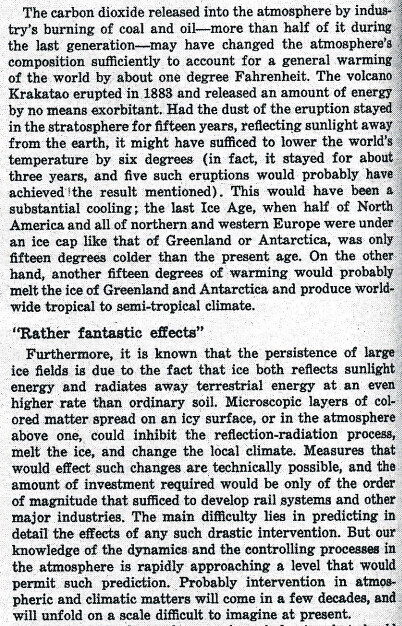 Via Twatter, I discover that Every president since JFK was warned about climate change. That doesn't seem especially plausible to me - at least, in the conventional sense of the phrase "climate change", which is used to mean "global warming" - and the sense of the word "warn". Since I suspect attacking this would be more shooting fish in a barrel, I won't bother; instead I'll look at the source of JFK's warning, which was apparently from the great von N, no relation to von S. If you look, you'll easily find Can we survive technology? (Fortune, 1955) which purports to be a reprint from the archives. Alas, you'll search in vain for climate there, and you may be rather confused by the somewhat abrupt ending of the piece, without even the dignity of a final full stop. And then it becomes clear that whoever was tasked with transcribing this stuff just got bored after a bit and stopped.

Happily, there's a copy at http://activistpost.net/Can-We-Survive-Technology.pdf1

I don't have a great deal to say about it, though. He knows about CO2 causing warming; he knows about aerosols causing cooling. However, he doesn't seem to be concerned, as we are now, with inadvertent warming from CO2 emissions; rather, his interest is in deliberate modification.

At this point I need some text to fill out the blank space before the next image comes in. I could read more of the article itself, but don't feel inclined to. Instead, I'll tell you about my sculling outing today. I didn't get out until 2:30, by which time the early sun had gone; and I had to fight my way past endless novice VIIIs tangled up with each other, and the moored boats; but once on the Reach it was lovely. Then it began to rain, and on the way back it absolutely hammered down so that it was hard to see. Ah, I see I've hit my quota. Excellent, on with the show. 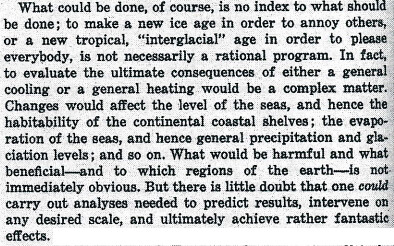 He realises that trying to change the climate might not please everyone; he is bizarrely confident of our ability to do it, however.

Perhaps not unreasonably, Senator Clinton Anderson chose to bring this to the Prez's attention, but under the rather weak rubric of "I mean only to suggest to you that this is an interesting subject and one which should not be put entirely on the shelf.

For my general opinions about "early warnings", see In the decade that ran from 1979 to 1989, we had an excellent opportunity to solve the climate crisis? and indeed Who knew what when? not forgetting The oil industry knew about climate change long before the American public did?


1.  Warning; that nice PDF came via this, which begins In the course of exposing chemtrails... and then ...is the most potent evidence yet in support of the assertion that the theory of man-made global warming is a cover story for the biggest scientific effort in history. However, that does have a plain-text copy of some of the von N text, which I'll paste in here for convenience: The carbon dioxide released into the atmosphere by industry’s burning of coal and oil – more than half of it during the last generation – may have changed the atmosphere’s composition sufficiently to account for a general warming of the world by about one degree Fahrenheit. The volcano Krakatao[sic] erupted in 1883 and released an amount of energy by no means exorbitant. Had the dust of the eruption stayed in the stratosphere for fifteen years, reflecting sunlight away from the earth, it might have sufficed to lower the world’s temperature by six degrees (in fact, it stayed for about three years, and five such eruptions would probably have achieved the result mentioned). This would have been a substantial cooling; the last Ice Age, when half of North America and all of northern and western Europe were under an ice cap like that of Greenland or Antarctica, was only fifteen degrees colder than the present age. On the other hand, another fifteen degrees of warming would probably melt the ice of Greenland and Antarctica and produce worldwide tropical to semi-tropical climate.


* A study of climatological research as it pertains to intelligence problems
* Trump cancels US cemetery visit amid diplomatic embarrassment
Posted by William M. Connolley at 8:06 pm

Dwight D. Eisenhower was president in 1955. I doubt that he paid the slightest attention to carbon dioxide.

David, von Neuman was not a shy guy, and having appointed him to the AEC, Ike likely got an earful on everything the new computers could do, modeling the atmosphere included- the IGY was a Big Deal