Jordan Peterson is a tosser 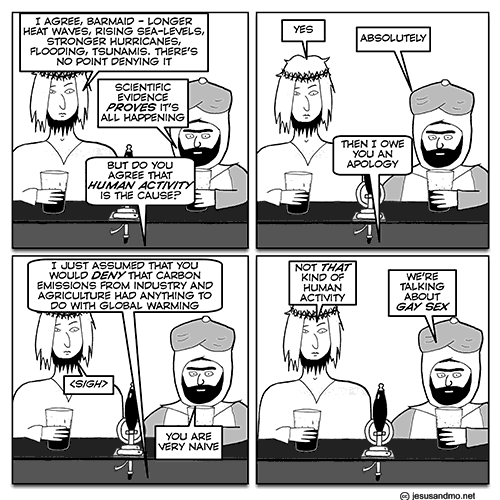 #1 in a series of "my friends have taken this idiot seriously so I paid some slight attention"1. ATTP has discussed him and his a few times and it wasn't very interesting. But now JP has chosen to say things about global warming which makes it obvious that he's a fuckwit, so I can conclude my opinion-forming process with "tosser". There's a convenient transcript of some of his words by CliSep, who I think are dodgy, but ATTP Twitted their link, so I guess that's OK.

We start off with Well, I don’t really have beliefs about climate change, I wouldn’t say. I think the climate is probably warming, but it’s been warming since the last ice age, so... This is a bit shit, taken together. There's nothing wrong with "Well, I don’t really have beliefs about climate change, so I'd rather not answer your question" or some other such deflecting formula; but having professed no knowledge, there's no justification for going on and pushing out your beliefs2. There's a get-out-card available for him, perhaps, if he wishes to distinguish "beliefs" and "knowledge": perhaps he knows a lot, but doesn't "believe" in it? But if so, he should be clearly distinguishing the two; otherwise he's just guilty of muddled talking, and probably muddled thinking.

In answer to "But It’s dramatically accelerated in the last couple of decades" we have Yeah, maybe, possibly, it’s not so obvious, I spent quite a bit of time going through the relevant literature, I read about 200 books on ecology and economy. Again, there's the contradiction between his original assertion of lack-of-belief, and his apparent vague but firm knowledge that "it's not so obvious". This is then followed up by a claim to have looked at the "relevant literature", which then turns out to be ecology and economy.

These are obvious points the interviewer should have picked up on. But the interviewer is as thick as pigshit and totally fails to notice, so JP gets a free pass in the interview. But not from me. Is he genuinely so muddled that he doesn't know that he needs to look at physical climatology, if he is interested in the temperature record? That the IPCC is the obvious source; and that there's a convenient summary available? Of course, if you're a provocative public intellectual, then simply agreeing with the relevant authorities is uninteresting and might diminish your aura of controversiality.

But actually the answer is that he's even more muddled, because he segues straight into I find it very difficult to distinguish valid environmental claims from environmental claims that are made as a secondary anti-capitalist front. And indeed, that's a separate muddle one can get into, but it is nothing to do with temperature rise.

So, far from a clear-thinking intellectual, he's just a rather confused talking head.
Update: 2022/01: "there's no such thing as climate" and "climate and everything are the same word" - Jordan again demonstrating he's a useless talking head who doesn't know what he is talking about. And it's nice of Timmy to let us know that he is clueless on the science too (Timmy's usual approach is "let's take the IPCC as given, and do the econ"; this makes sense. In this case, unwisely, he has decided to throw his idiot commentators a bit of what they fancy; but he has an audience to sustain).


1. Number 2 actually happened first and is over here, deliberately obscure, but I link it for completeness. This one was a-friend-down-the-pub, and to be fair they were only going to listen to him speak.

2. Unless you're a talking-head public intellectual too dumb to realise that you're not obliged to have an opinion or know things about all subjects.


* What the Word Liberalism Means, If Anything.
* The 'debate of the century': what happened when Jordan Peterson debated Slavoj Žižek by
Stephen Marche
* He's still a tosser in 2021.
Posted by William M. Connolley at 11:10 am

You missed out the fun lines, like him stating that we're literally never going to run out of fossil fuels. He even misrepresents Bjorn Lomborg, who actually has called for a carbon tax.

I did wonder about bothering to read on, but decided it wasn't necessary to pollute my vital fluids with any more of his stuff, once I'd made my mind up.

I can't help but laugh when Peterson claimed that Bjorn Lomborg had done his analysis very carefully.

I don't know who Jordan Peterson is.

But ATTP, I do know who Bjorn Lomborg is. I also know that he has been proven correct on about 95% of what he wrote in The Skeptical Environmentalist.

The book has errors. The magical internet has an errata page. His broad claims have been substantiated by other scientists and papers. But the eternal vilification program proceeds unchecked. I believe The Economist had the definitive last word on the issue. https://www.economist.com/science-and-technology/2003/01/09/thought-control


I do believe our gracious host harbors some ill feelings towards Lomborg, but perhaps he can clarify.

Meh. I don't think that was TE's finest hour. It took them a long time to come round to global warming, and they weren't there by 2003. Maybe see this; of going further, back to sci.env. Hello Timmy!

As to L, I don't think I've had much to say about him. Arguably I defended him, weakly, over 2007's Cool It. There's a pile of tedious me-trying-to-stop-everyone-get-too-partisan in the comments from 2008. I think my reaction to TSE are back in sci.env; maybe this.

The people who get to interview people like JP, Trump, etc have no idea that global warming is required by the laws of physics. They don't know much of anything except that "97% of scientists say" that man is causing global warming. They don't know the physics, hence they can't follow up with good questions to dumb claims.

It's a bit hard to take JP seriously, he talks too much (ever watched one of his videos - yikes!). If he can use Conservation as a segue into beating up on "The Left", he will. I treat his comments about climate change as conversational, not analytical.

Shooting a fish (albeit one popular with the idiot classes) in a barrel.

" I believe The Economist had the definitive last word on the issue. https://www.economist.com/science-and-technology/2003/01/09/thought-control"

In 2003, The Economist doing the talking in defense of Lomborg was likely Matt Ridley.

OTOH, the UN had just sicced a Swedish judge on lomborg in the Danish Science Star Chamber
( a Balkan folk law specialist if I recall )