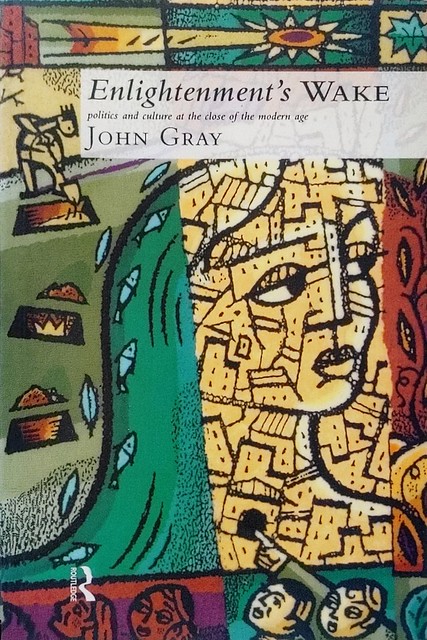 Or, Enlightenment's Woke. More philosophy of government. Rawls refers, as does The Enlightenment Project; this post begun in Wales quite some time ago and now hastily finished; I hope you can't see the join. This is from Enlightenment's Wake by that nice John Gray, in particular essay 6, "Agonistic liberalism". You'll immeadiately wonder what he means by that phrase but, because he is a ponce, he won't immeadiately tell you. Indeed he never does, explicitly, but explains how it differs from other liberalism. Despite this what he has to say is valuable.

We start from an observation that Gray makes on Rawls: effectively, that Rawls assumes too much; that he claims to deduce too much from his principles. Since I said exactly the same, I agree with this. But Gray then takes this as a fundamental problem, asserting In all of its varieties, traditional liberalism is a universalist political theory. Its content is a set of principles which prescribe the best regime, the ideally best institutions, for all mankind. I think this is wrong, but it isn't quite clear if Gray is merely setting up a strawman, the better to contrast his nuanced theory.

TL1 does not go to the detail of prescribing the best regime or the institutions. Instead it sets out abstract rules that such regimes and institutions must satisfy. There is no implication that this would lead to a standard set of rules; there are random choices made along the way that will inevitably be part of the final product... insofar as there even is a final product; I'm not sure there is. Gray not only expects this, but he also believes that the EP implies the evanescence of nationalistic alliegances, and marginalisation or levelling down of cultural differences. I don't think that's true; certainly not on the scale of a century or so. Instead, he is distressed by the dominance of nationalistic and ethnic and fundamentalist - religious, I suppose - forces in current affairs. But I think his time scales are too short.

He prefers what he defines (as a by-blow: my notes to the page say "FFS you stupid bastard introduce terms by definition, not incidentally") "agonistic liberalism", but alas for him wiki hasn't adoped the idea, and it only appears as a sub-section of his own page. Quite what he means by AL is not precisely defined - which is fair enough - but gets a sort of set of definitions, sometimes by what it isn't. But value-pluralism seems to be at his heart: the idea that people have, errm, not the same values and desires as each other. Which seems fine to me. Most of the discussion is rather abstract, but he does mention abortion in roughly the way I did: by noting the USAnian's way of trying to decide it legally (in JG's somewhat dubious terms, "the liberal legalist project of abolishing politics") as opposed to most other country's way of dealing with it politically. He spends some time opposing Rawls, but Rawls is wrong, so who cares?

He - correctly I think - asserts that what he is arguing for is not relativism, but under-determinedness. Invoking Isiah Berlin, I hope I don't have to read him too.

I belatedly realise I didn't finish the book. Perhaps just as well: in chapter 7 - the undoing of conservatisim - he's foaming at the mouth2. Most unedifying.

And lastly - I hope - Gray ironically for one who respects tradition seems to me to fall into the sin of despair, and shows why the Church regards is as a sin: having overthrown one's beliefs, one becomes prone to any alternative, without considering it carefully, merely because it does not suffer quite the same faults as the position one has abandoned.

1. I'm not too familiar with Traditional Liberalism so I may need to refine who I'm referring to. I'm thinking of Smith and Hayek, and even Hobbes though he is not a liberal.

2. I hate this: whilst raving (The denial of the primacy of cultural forms is, of course, an implication of any neo-liberal view that makes a fetish of consumer choice, and of any more developed liberal philosophy which accords an intrinsic value to choice-making independently of the goodness of that which is chosen. And it is a necessary presupposition of the knee jerk response of economic liberals which regards all political intervention in economic life as an evil that stands in need of justification.) he does nonetheless continus to have valuable things to say. But what are they? Meh, I can't be bothered to synthesise his "argument", that should have been his job. There's a difference between practical politics and theoretical politics; I'm not much interested in the former, except insofar as it is intrinsically part of the latter.

But, he also has non-valuable things to say. Such as ...unlikely to be successful so long as public policy and indeed the public culture are animated by the idea of the insatiability of ever-expanding human wants. I have argued elsewhere that a conception of satiable human needs has a central role in reasoned discourse about public policy. The idea of a satiable human need will be workable in public discourse, however, only if the ruling ideal of the unending proliferation of human wants is relinquished and replaced by a conception of sufficiency in which it is the quality of social life, rather than the quantity of goods and services, that is the central objective of public policy. Personally I want a govt that does less, and one of the elements of "less" should be not having an objective of public policy, other than "stay out of the way as much as possible". But there are two obvious objects to his idea: that he could have said much the same one hundred, or two hundred, years ago; and yet few today would be content with the level-of-stuff available then; and that if any one nation does so limit itself, it will be left behind. There's also a problem that this is all very broad brush and he has worked out no details.

the idea that people have, errm, not the same values and desires as each other


pretty sure David Hume covered that some time ago