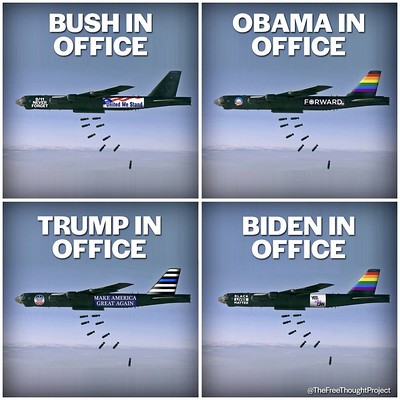 [I wrote this in April, but didn't quite get round to publishing it. But now it is of historical interest, so I'll publish it. Apart from this notice, I haven't updated it at all. See-also Afghanistan.]
It looks like the Yanquis are leaving Afghanistan, having trashed the place. The Economist thinks that Joe Biden is wrong to withdraw American troops from Afghanistan. And so of course my pic is unfair. Obama, in a post characteristically full of long complete but somehow rather empty sentences that don't quite get round to explaining why he didn't do it, agrees with Biden.
The backstory, for those who didn't pay attention at the time: after the Soviets fucked off, people paid little attention to Afghanistan until they had the unwisdom to host Osama bin Laden, who twatted the Yanquis, who in righteous wrath twatted Afghanistan. Unfortunately, no-one in the USA even knew where Afghanistan was, so this proved insufficiently cathartic, so they flailed around for someone else in the public eye to twat, and took out Iraq. Militarily that went well, but politically the aftermath was disastrously badly done, and alas the same applies to Afghanistan. My favourite story from those days is We don't even know how many legs he's got.
But I only rehash history to get me to the point of asking: should the Yanquis indeed Go Home? I find myself with Sheryl Crow: I'm standing in the middle of the desert / Waiting for my ship to come in / But now no joker, no jack, no king / Can take this loser hand / And make it win. Or, if you prefer something more formal, sunk costs fallacy. Or more explicitly, yes they should leave.
If they do, terrible things will happen when the current incompetent corrupt regime falls. But terrible things are happening now. And terrible things might happen if the bloody Commies step in (see-also Syria). But overall, civil war is the worst of all evils: so if you're not prepared to win, you should step back and let someone else win.
More generally - and this is why I bothered write this - there's a more general failing nowadays. Once upon a time, terrible things happened, but at least eventually the various sides fought to exhaustion and stopped. We seemed to have contrived a world order where that doesn't happen: Afghanistam, Iraq, Syria, Yemen, Somalia, Libya: outside powers do just enough to stop their side losing, but not enough to win. They lose a few of their own folk in the process, but the main losers are the civilians on the ground.
Posted by William M. Connolley at 8:14 pm

"KU’s new chancellor, Mohammad Ashraf Ghairat, has vowed on Twitter “to rid Kabul University of Western and infidel thoughts” and pursue a policy of segregating male and female students to stamp out “prostitution” and “moral corruption” on campus. (Nearly half of KU’s 20,000 students are women.) “As long as real Islamic environment is not provided for all, women will not be allowed to come to universities or work. Islam first,” he tweeted on 27 September."