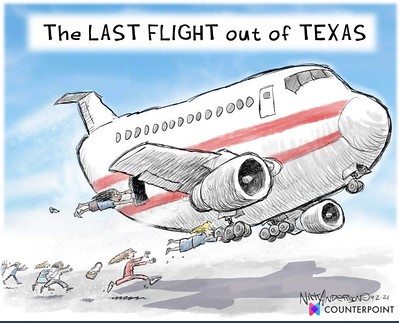 Whole Woman's Health v. Jackson was a decision by the United States Supreme Court not to issue an injunction against Texas Heartbeat Act1; read it in full here; it generated a vast amount of anguished reaction from the usual suspects. The decision was difficult but reasonable people could and did argue different sides; personally, I'd have decided the other way.

In most politics, the progressives tend to favour majoritarianism: if enough people want it, they should get it. Most obviously on gunz. And the conservatives tend to favour the other side: that the constitution binds the tyranny of the majority. But on abortion it is the other way round: the progressives want what they consider their constitutional right to abortion, and the conservatives think that if Texas passes a law, then it should be fine. This just shows that both sides attachment to abstract rules and principle is shallow; this is of course bad.
I tend to favour constitutionalism, but that doesn't in itself make me a supporter of RvW, because (as I've said before) RvW's basis in the constitution is thin at best; wiki has a reasonable discussion of the points in the Opposition and Legal sections. RvW's main basis at the moment is that it has been established law for decades, and enjoys broad support amongst the populace (but suffers fanatical opposition from a significant minority). In particular, the argument (made by folk such as the sainted RBG) that moving the argument from the political to the legal sphere cut short debate and de-legitamatised the result is I think real; see-also Sumpers again; elsewhere the change has tended to be political (e.g. the Irish referendum).

On the fundamental principle

There is some balance to be struck between individuals and the state; this is the fundamental basis of society. Problems arise when people have very different ideas of morality. In general, imposing your morality via law is only appropriate if there is overwhelming support for it (that shalt not murder). Sumpers offers the example of fur farming, which progressives are keen to ban. And yet the liberal approach would appear to be to leave other people's morality alone, if you can. And that appears to be the correct rule for abortion: the state has no need to make any laws in this area, and so should not. All the wurble about state interests is just spurious. It should be possible to find a principle like this in the constitution, or write one in.

The Texas las has a novel enforcement mechanism, in that it empowers private individuals to sue those who aid abortions, rather than the usual mechanism of getting the state to do its stuff. I think this is fluff; it does not change the underlying substance, regardless of the decision's their application also presents complex and novel antecedent procedural questions on which they have not carried their burden. For example, federal courts enjoy the power to enjoin individuals tasked with enforcing laws, not the laws themselves. But the constitution is vague about the powers of the court; and precedent certainly says they can declare laws unconstitutional.

In the mean time

Eventually, the full case will come to court and likely be declared unconstitutional, with RvW as precedent (I am doubtful that today's court would make RvW, but I think it likely they will uphold the precedent). But I think it has to wait in line; there's the Missisippi case Dobbs v. Jackson Women's Health Organization to hear first. So what should the court have done re temporary injunctions? It gets to either block the law, or (implicitly or explicitly) allow it; they chose the latter; as I said at the start, I'd have chosen the former, on the grounds of stability.
I think the Supremes have a (laudable) tendency to not-do-things rather than do-things; and certainly, they reject or ignore the vast majority of petitions to them, as they must. Then again, there's the "principle" of irreparable-harm-in-the-interim, which justifies emergency injunctions. Thinking through that: (a) suppose they had emergency-blocked the law but the law is, eventually, found constitutional. In that case the irreparable-harm would be the deaths of foetuses. Conversely, (b) if they don't block it but do eventually strike it down, the irreparable harm is people being forced to drive 300 km out-of-state2. The balance there seems to me to favour (a).
The other argument in favour of not-block is to see how it works out. If they block the law, we never get to see what would happen. As it is, we'll presumably find out if the apocalyptic predictions turn out to be true or not.

As noted above, these laws that everyone hates are made by democratically elected pols, so if you don't like the laws they make, the obvious solution is to elect someone else, or leave. Obvs, if all Texan women hated the laws and considered it their top electoral priority, the Repubs would be voted out. But that doesn't happen. Partly because not all Texan women hate the laws, but partly because of a sort of moral hazard: since people are fairly sure the Supremes are going to strike the laws down, they can vote for these clowns in the fairly-sure knowledge they won't suffer from them.
As to leaving, this brings me to my cartoon, which was put up on fb by the normally-sensible Bart V. When I replied with the Houston Chronicle's Texas continues to lead US in raw population growth, Census Bureau estimates he had no answer, of course. Cartoons have to reflect reality to be funny; otherwise, they just point up the lack of understanding of the promoter.

Unconstitutional in so many different ways?

A lot of people who really ought to know better are saying that the Texas law is clearly unconstitutional, but I don't think it is. As noted above, the constitution is at best vague and at worst silent on the issue (and for fans of reading the framers's intent, I very much dubt they intended any such). What it is, is clearly against precedent; but that's different. Stare decisis is part of the common law, not the constitution.
That same article continues Second, the Texas statute is unconstitutional in that it allocates to ordinary citizens who have no connection to the woman seeking an abortion the power to sue anyone who provides any help to the female. And I sense deep unease amongst progressives against the idea of citizens enforcing the law. But, why? Citizens having a deep connection to the law seems rather USAnian to me; these funny people elect some sherrifs and judges, after all.

As a side note, wiki has several articles on this area, and to my surprise, they are not a hotbed of edit warring; indeed, they are snoozy.

1. Actually, I'm unsure if it is the name of just that decision; or if it will be the name of the full case when it comes to court, and that decision will be just the opening skirmish.
2. I know, I know. This is harder for poor folk. But so is everything. Certainly, it will be no great hardship for the wives and daughters of Texan politicians.

* Challenging Unconstitutional Civil Liability Schemes, as to Abortion, Speech, Guns, Etc.
By and large, those schemes (like Texas’s SB 8 liability for abortion providers) must be fought by raising the Constitution as a defense in a civil lawsuit—not through preenforcement challenges; by Eugene Volokh.
* Woman with Down’s syndrome loses UK abortion law case.
Posted by William M. Connolley at 8:39 am

How would your reasoning apply to Brexit, if at all?

Brexit is a matter of inter-governmental relations rather than personal morality, so I don't see much connection. Or do you mean, was it validly decided? In which case: certainly; it passed parliament, and the UK "constitution" is that parliament is sovereign.

The Alamoistan Taliban should compare notes with the new regime in Kabul, which boasts of over six births per family,

WC endorses vigilante (in)justice? - because of course he does.

Weird. What are you reading that makes you think that? "And that appears to be the correct rule for abortion: the state has no need to make any laws in this area, and so should not" is an explicit endorsement of the opposite, and not too hard to understand.

But FWIW I think labelling the law "vigilante" is just propaganda, and so to be avoided.

So then making a law authorizing any random person to sue is to be avoided.

I would say so; and indeed I did. But there are subtleties one can argue; see my post.

Seem to me that injustice is rarely all that subtle.

I wonder if challenging the law on the basis of standing might work? As e.g. the Graun notes "To date, at least two lawsuits have been filed against a Texas doctor who publicly said he performed an abortion that violated the law... Both suits were both filed by disbarred out-of-state attorneys...". Those filers would normally lack any standing, as I understand it.

Normally. This is not normal.

This law gives standing to any person in the USA to sue any person or organization anywhere in the USA if they aid an abortion in Texas.

The most amusing clause in the law is that you can't sue the rapist.

" Notwithstanding any other law, a civil action under this
section may not be brought by a person who impregnated the abortion
patient through an act of rape, sexual assault, incest, or any other
act prohibited by Sections 22.011, 22.021, or 25.02, Penal Code."