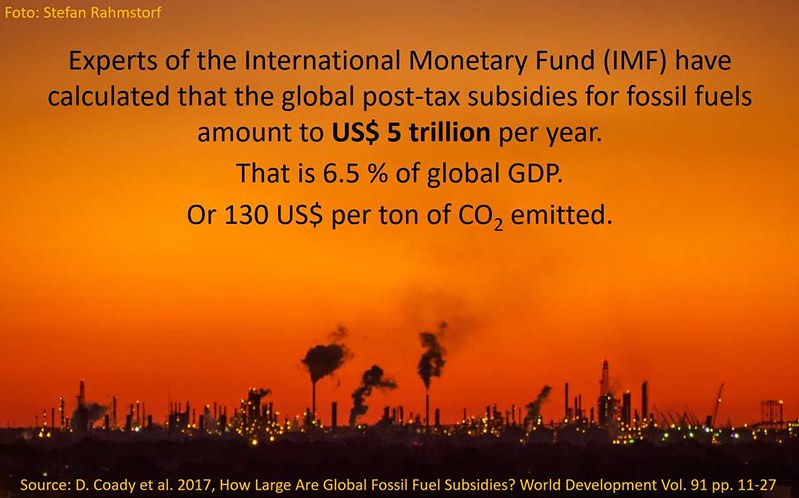 By David Coady, Ian Parry, Louis Sears and Baoping Shang; World Development, 2017, vol. 91, issue C, 11-27. To anyone thinking "lumme guv I've 'eard this one before", the answer is yes you have, but for some reason I didn't include the keyword "Coady" in that, and for another that nice SR has just fb'd the thing again.

So the "headline" claim is something like fossil fuel subsidies are $5T/yr, or about 6% of GDP. Good grief, that's an outrage. But it's also an awfully large amount of money; do govts really have that much spare dosh to splash around on unprofitable subsidies? The answer, of course, is no, they don't. From the abstract:


Estimated subsidies are $4.9 trillion worldwide in 2013 and $5.3 trillion in 2015 (6.5% of global GDP in both years). Undercharging for global warming accounts for 22% of the subsidy in 2013, air pollution 46%, broader vehicle externalities 13%, supply costs 11%, and general consumer taxes 8%. China was the biggest subsidizer in 2013 ($1.8 trillion), followed by the United States ($0.6 trillion), and Russia, the European Union, and India (each with about $0.3 trillion). Eliminating subsidies would have reduced global carbon emissions in 2013 by 21% and fossil fuel air pollution deaths 55%, while raising revenue of 4%, and social welfare by 2.2%, of global GDP.

So this all rather tediously depends on what your definition of "subsidy" is. You could define it their way - in which case they're right, of course - or you could more restrictively define it as actual cash handed over in order to encourage people to do things. In which case they're wrong; and the largest subsidisers are FF producers like Iran or Venezuela1, as you'd expect. And the numbers come down by more than a factor of 10, when I last looked.

But when someone fb's such a thing, under the heading "While this continues, nobody can claim that we have seriously tried to get out of fossil fuels!", do you think people will understand these distinctions?

Also, note that believing these numbers means believing some version of a SCC number and thus reducing climate impact to GDP, which not everyone is keen to do; and another for air pollution, though since that doesn't involve nearly so much future damage it can perhaps be better quantified.


1. Consider the obvious ritual flings about the incompetent V govt to have been inserted at this point. But not the Iranian one? Hmm, interesting.
Posted by William M. Connolley at 8:47 pm

Informative Article. Looking forward to hear more from you. Keep it up. Please follow to learn more about fuels.
FOSSIL FUELS